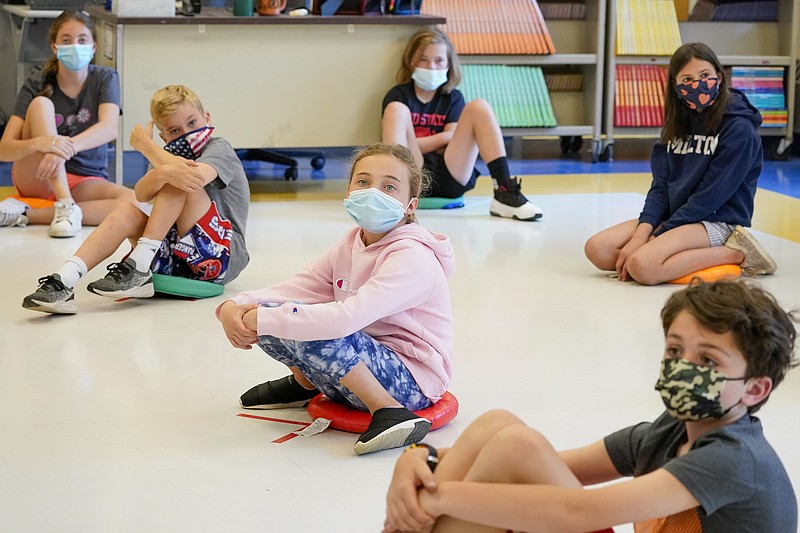 FILE - In this May 18, 2021 file photo, fifth graders wear face masks are seated at proper social distancing spacing during a music class at the Milton Elementary School in Rye, N.Y. As more children go back to the physical classroom, families are expected to spend robustly on a wide range of items, particularly trendy clothing for the critical back-to-school season, according to one key spending measure. (AP Photo/Mary Altaffer, File)

NEW YORK (AP) - As more children go back to the physical classroom and families look to restart their lives, back-to-school spending this year could top pre-pandemic levels, according to one key spending measure.

Mastercard SpendingPulse, which tracks spending across all payment forms including cash, forecasts that spending will be up 5.5 percent between July 15 and Sept. 6. That's compared with the year-ago period when sales were up a modest 1.2 percent as the pandemic wreaked havoc on schools' reopening plans and back- to-school shopping.

In a more telling sign of a rebound, back-to-school sales should increase 6.7 percent on a two-year basis, according to Mastercard SpendingPulse. The figures exclude sales from autos and gas.

Last year, parents focused their spending online and bought supplies and electronics to help their children set up work stations at home. When it came to apparel, they limited their purchases to sweatpants and other comfy clothes for their children and avoided department stores.

The rosy forecast issued Thursday comes as retailers, particularly mall-based stores, are seeing a strong recovery as newly vaccinated shoppers feel safe going out and socializing. On Wednesday, the National Retail Federation, the nation's largest retail trade group, sharply revised its annual outlook for retail sales. It now expects the increase to be anywhere from 10.5 percent to 13.5 percent compared to an earlier forecast made in February of at least 6.5 percent.

"The economy and consumer spending have proven to be much more resilient than initially forecasted," Matthew Shay, president and CEO of the retail trade group, said in a statement. "The combination of vaccine distribution, fiscal stimulus and private-sector ingenuity have put millions of Americans back to work."

While NRF noted risks related to worker shortages, an overheating economy, tax increases and over-regulation, it pointed out overall households are healthier, and consumers are showing their ability and willingness to spend.

The downside is many retailers may not be able to fully capitalize on this surge of spending. For many items produced overseas, stores had to place their orders at least six months ago, and they were conservative, said Steve Sadove, senior adviser for Mastercard and former CEO and chairman of Saks Inc. He also cited the logjam at ports, making it difficult for retailers to bring in goods to their stores.

"The supply chain is backed up. The ports are backed up," he said. "You're going to find scarcity."

He said a number of retailers are air shipping items instead of transporting them by boat in order to have them in stores in time for back-to-school.

For this back-to-school season, Sadove said clothing should enjoy a stronger-than-expected rebound, with Mastercard SpendingPulse forecasting a 78.2percent sales increase compared with last year. On a two-year basis, the figure is expected to be up 11.3percent. Sadove said that retailers are seeing a shift in consumer spending toward trendier items like cropped tops and mini skirts.

In particular, department stores are enjoying a solid recovery after struggling last year with stiff competition from discount stores like Walmart and Target. The department sector's sales should be up 25.3percent during the back-to-school period, compared to a year ago. Sales should rise 9.5percent on a two-year basis.

Sadove told The AP that department stores are reaping the benefits of their moves to expand into online services like allowing online shoppers to pick up orders at the stores. They're also expanding into new categories like wellness.

Consumer electronics should have strong sales growth compared to a year ago and on a two-year basis. But online sales are expected to drop 6.6percent for this period compared to last year when shoppers focused mostly on buying online. Still, that figure should be up 53.2percent on a two-year basis, according to Mastercard SpendingPulse.