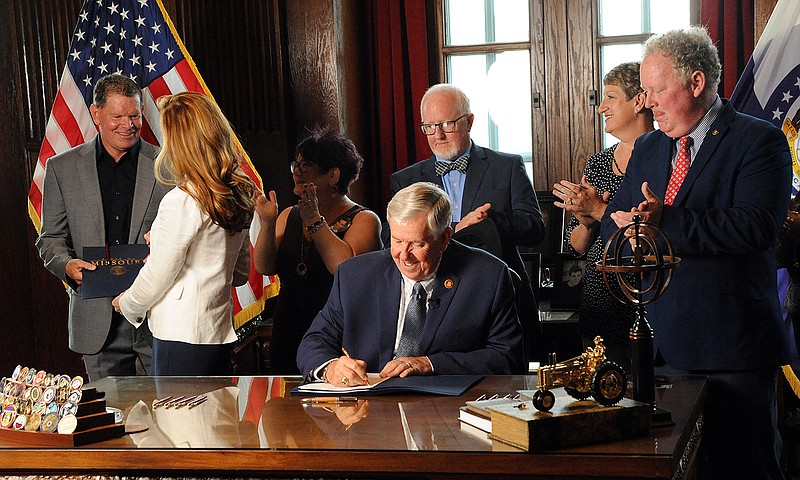 SB 63, sponsored by Sen. Holly Rehder, R-Scott City, creates a task force - made up of members from the state Board of Registration for Healing Arts, Board of Pharmacy, Board of Nursing and the Missouri Dental Board - to select a bid from a vendor to operate a prescription drug monitoring program for schedule 2, 3 and 4 controlled substances in the state. The act takes effect Aug. 28.

St. Louis County Department of Public Health's prescription drug monitoring program incorporates 75 participating jurisdictions and covers 85 percent of the state's population. The program, according to the legislation, will be required to cease operation after the statewide vendor is chosen and available for use.

Some legislators expressed concerns over the privacy of patient information when debating the bill.

According to the legislation, the vendor will be responsible for patient dispensation information collection and maintenance, and will be required to operate under rules and regulations created by the oversight task force. The vendor can maintain patient information for up to three years.

Patient dispensation information collected by the vendor can be accessed statewide by prescribers, dispensers and other health care providers, and is protected under the Health Insurance Portability and Accountability Act of 1996.

Rehder filed legislation calling for a prescription drug monitoring program every year she was in the Missouri House, starting in 2013. In her first year in the Senate, the legislation made it through both chambers and was signed into law.

Rep. Travis Smith, R-District 155, carried the bill through the House and said he continually heard support from the pharmacists and doctors he spoke to about the legislation.

Parson, Rehder and Smith were joined by supporters of the legislation, including two parents whose children died from opioid overdose.

According to the St. Louis County Prescription Drug Monitoring Program's 2019 annual report, about one in four residents of participating jurisdictions received a controlled substance prescription in 2019.