State auditor announces she will not seek re-election 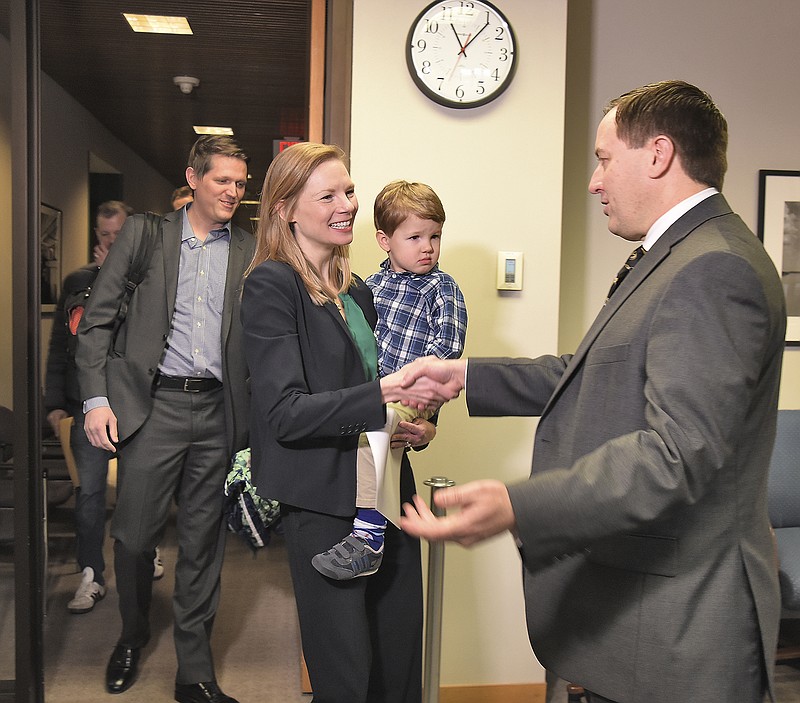 Missouri Secretary of State Jay Ashcroft, right, greets State Auditor Nicole Galloway as she proceeds to file the necessary paperwork Tuesday to officially run for governor as a Democrat. She was joined by her husband, Jon Galloway, in background, and her son, Joseph, 3, for the formalities and the news conference that followed.

Missouri Auditor Nicole Galloway announced Friday on Twitter she will not run for re-election in her current position or pursue any other post in 2022.

Galloway, the only Democrat in a state-level Missouri office, ran unsuccessfully for governor in 2020 and has been the state auditor since 2015.

In a statement, Galloway called serving as auditor "the honor of my life" but said it detracted from spending time with her husband and three sons.

"My family has made me a better public servant, and they have inspired me to lead with integrity and grit," she said. "Yet, during this past decade, I have missed countless family events, Little League games and school activities. I am ready for the next chapter of service and life with my family."

Galloway jumped to the forefront of the Missouri Democratic Party last year when she ran against Gov. Mike Parson on a platform centered around her record of exposing corruption as auditor. She lost the race by 17 percentage points but received endorsements from major political figures around the country.

Then-Gov. Jay Nixon appointed Galloway to the auditor post in 2015 after the death of Tom Schweich. She won a full term in 2018, which she will complete.

Before state office, Galloway served as Boone County's treasurer and worked as an auditor for local firms and insurance companies.

The Missouri Independent reported Friday morning that Republican state Treasurer Scott Fitzpatrick is seriously considering a run for auditor in 2022, though no one from the party has entered the race.