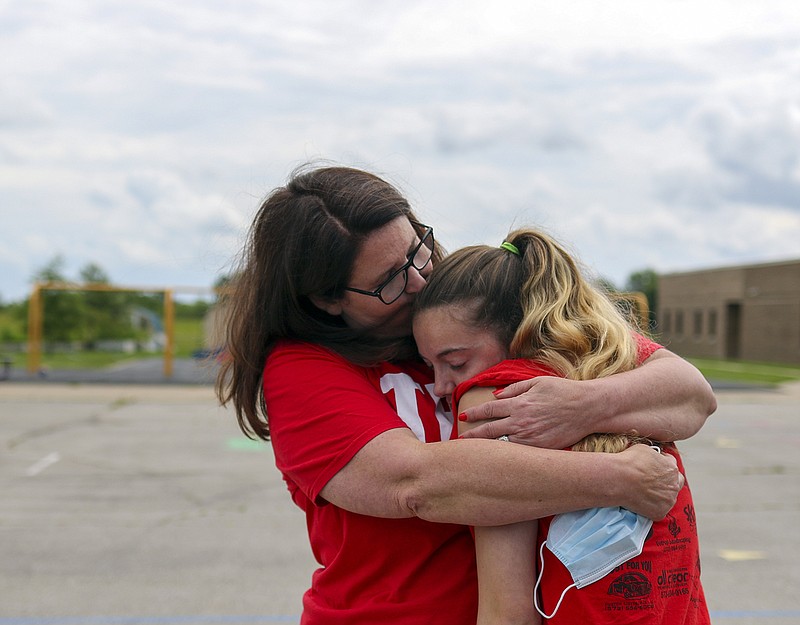 Most of the students had Henderson as a teacher in fourth and fifth grade and are now going into their senior year of high school. They don't talk to each other much anymore, but they came together Tuesday to see Henderson as she retires from her 29-year teaching career. They hugged her, helped her clean out her classroom and bonded over shared memories.

Henderson compared the day to the theme in one of her favorite books, "Bud, Not Buddy."

"The theme there is when one door closes, another one opens," Henderson said. "I thought it would be appropriate for them to help me pack, and we walk out together, and that's the ending of a chapter."

Henderson, who was a teacher at Moreau Heights for 26 years and Callaway Hills for three, said she's retiring on a high note knowing she loved her job every day.

She said she'll miss the students and the love she felt in the classroom each day the most. She'll miss teaching young, curious minds about the world, seeing their kindness and love spread to others, and hearing students tell her "I love you," "thank you," or "I had a great day."

Henderson and the students laughed as they recalled memories like walking to school together and taking a photo on Henderson's front porch, creating extravagant Valentine's Day boxes, eating ice cream and doughnuts on birthdays, playing kickball every day while a student spelled out "I love Mrs. Henderson" in pebbles on the playground, and collecting acorns and leaves, and putting them in a big pile to learn the power of teamwork.

Henderson said if she had one day to re-create a memory with every class, it wouldn't be related to curriculum. It would be fun moments like these she and the students will never forget.

The students re-created one last memory Tuesday by playing kickball on the playground, bringing their time with Henderson full circle.

Seven years later, the students still remember some of the phrases Henderson drilled into their heads to motivate them, such as "time wasted can never be recycled" and "spoon feeding in the long run teaches us nothing but the shape of the spoon."

The students said Henderson had a positive influence on their lives because she had high expectations and pushed them to their potential.

"She wanted you to be the best you can be," Jaselynn Saffeels said.

They said she loves each of them for who they are, and while she motivates them to be their best selves, she tells them to never change and she loves their "flavor" because, as she says, "if you only got to season your food with salt and pepper, it wouldn't be as exciting."

"She was the only teacher who influenced us to continue doing stuff that we loved in our lives," Whitney Nale said.

Principal Todd Shalz said the trait that stands out the most about Henderson is she creates a classroom family for the students and knows it's not just about the curriculum - it's about each student and the relationship she has with them.

He said he sees children in Henderson's classes looking out for each other, building each other up and creating lasting relationships because of the qualities they learned from Henderson.

Shalz said the group of students coming back to see Henderson is a testament to the lasting impression she's made on them.

"She leaves a lasting mark on kids, and they take that stuff away with them," Shalz said. "She helps kids believe in themselves."