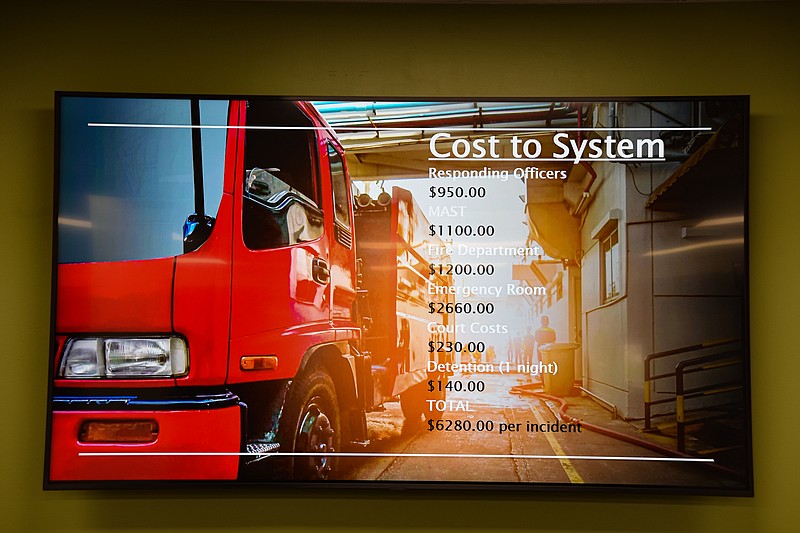 Julie Smith/News Tribune Jamie Bartin delivered a presentation on June 29 about the new Crisis Stabilization Center to go into service in Jefferson City. It will be located at Compass Health Network on Metro Drive.

All too often, someone suffering from a mental health crisis in Missouri ends up at an emergency room or in a jail cell.

Neither can provide the continuity of care patients require.

The patient falls into a revolving door - of crisis, trips to the emergency room or jail, resolution, and release - and never finds a permanent resolution.

However, Missouri took a decisive step toward overcoming the issues by including about $30 million in the state's budget for programs aimed at creating solutions. One of the core efforts included in this year's budget is the establishment of state Crisis Stabilization Centers, championed by Gov. Mike Parson.

Within his highlights for the 2021-22 budget, Parson notes the state set aside $15 million to establish six new crisis stabilization centers and to further support five existing ones (like the Kansas City Assessment and Triage Center, Springfield's Burrell Behavioral Crisis Center, Joplin's Ozark Center, and others.).

It includes $5.3 million for 50 additional Community Mental Health and Substance Use Disorder Liaisons. The liaisons are behavioral health professionals who work with clients who have frequent interactions with law enforcement and courts. There are currently 31 liaisons in Missouri, each assigned to regions of the state. Liaisons ask their clients to contact them before police if they have an issue. Their focus is to direct people with behavioral health issues toward services they need - and away from the justice system.

Central Missouri will include two centers that Compass Health Network will operate - one in Jefferson City and one in Rolla - said Jamie Bartin, who oversees crisis programs for Compass.

Currently, law enforcement transports someone experiencing a behavioral health crisis to a hospital or jail, particularly during weekends or after hours, Bartin said during a Central Missouri planning meeting in late June.

"Those aren't always the most appropriate (destinations)," Bartin said. "We just didn't have any other options."

While they can be the appropriate sites, they oftentimes aren't, she added.

"You're in between, in that sort of gray area where individuals need someone - they need support, but we didn't have any other options within our continuum of services," she continued. "It costs a lot of money. It's not the most effective (use of resources)."

Data, she said, show it can cost more than $6,000 to resolve issues with an individual during a single crisis.

A report in the Journal of Mental Health and Clinical Psychology found the centers benefit health care providers and patients. They drastically cut the amount of time patients spend in emergency rooms, which frees up physicians and other staff. And the patients receive much needed services sooner.

Missouri has been monitoring successes at centers like the KCATC - a 24-hour-a-day, seven-day-a-week, year-round facility.

Patients will come into the new Crisis Stabilization Centers, where behavioral health clinicians can triage them. The patient can take a shower, get something to eat, and get his or her clothes laundered. The patient may receive fresh clothes or hygiene products.

Then they walk into the unit, which will contain "slots" (recliners), where they can sleep. Rolla will have eight slots, and Jefferson City will have four.

Organizers of the centers emphasize the units do not have beds. Patients may stay for only 23 hours.

The focus will be on providing behavioral health services.

"We'll have psychiatry after hours and weekends as well, which is really nice. We have that down during business hours, but we don't always have that after hours," Bartin said.

Patients will be able to see a psychiatrist via telehealth.

If they require medications, nurses will be available to distribute those.

"We don't want to be a drop-off place - where people can drop folks off," Bartin said, "but actually do something - and get them connected to services."

Case workers, who can connect clients to other services and provide them with transportation, will staff the centers.

Emergency responders who attended the planning meeting said transportation was a significant concern. They said if they are called back to the centers to take patients home or to treatment, they would be just as tied up as if they had waited with patients.

However, organizers of the meeting assured them transportation from the sites is their priority, too. Among case workers' responsibilities would be taking patients to their next destinations, whether to in-patient treatment in Hannibal, "momma's house" in Montgomery City, or elsewhere, Bartin said.

Case workers would also assist the patient in getting to their next treatment.

For now, all patients must be 18 or older.

The center of attention

"This approach has worked before in Kansas City," Dillon said. "Through programs like the ones being discussed locally and in other areas of the state, pressure is released from hospital emergency departments by delivering patients to the most appropriate venue of care. Essentially, individuals with mental health, substance use or other non-emergent health issues are managed outside of the emergency department. This helps reduce ED crowding and improves patient care in the ED and for the individuals receiving crisis intervention."

Not all centers will be made equally.

Joplin's (existing) center isn't 24 hours. Its schedule is based on high-traffic times. St. Louis has a "sobering center," which will be different than the local effort.

The state is to be available to support local communities with their centers, said Angie Plunkett, divisional coordinator for the Missouri Department of Mental Health Division of Behavioral Health. It is already participating in webinars and weekly crisis response discussions.

Missouri will share tips from the existing five centers.

The Crisis Stabilization Centers are intended to be regional facilities, Plunkett said. For example, Cape Girardeau is developing a center, but it has to serve the entire Bootheel and surrounding areas. And, she pointed out, officials in Poplar Bluff in Butler County or Kennett in Dunklin County would be reliant on the center in Cape Girardeau.

"There's no way we can put one of these in each county," she said.

The centers will not prevent hospital emergency rooms from receiving behavioral health patients, said Brent McGinty, president of the Missouri Behavioral Health Council, whose mission is to enable access to quality mental health services to all Missourians in need of the services.

Unfortunately, the first person a patient experiencing a mental health crisis often comes into contact with is a law enforcement officer.

But steps are being taken to train officers to recognize mental health crises.

More and more Missouri law enforcement agencies have officers who have received Crisis Intervention Team training, McGinty said. Those CIT-trained officers learn to identify issues, communicate with people they come into contact with and connect them with resources. A goal is to get people going through a mental health crisis the treatment they need, rather than putting them in jail or dropping them in a hospital's emergency room.

However, even with the help of the liaisons, the CIT officers could be tied up with one case for hours at a time.

They might have to find a hospital bed for the patient then face a three-hour transport.

"All these processes we're talking about - (officers) shouldn't be spending 12 hours with a patient to help them get stabilized," McGinty said. "We're connecting those resources, to address those things, especially in a non-8-to-5 clinic approach."

There are going to be nights when staff at centers will have to be satisfied with simply doing the best they can for clients, he added.

Even with the CCBHCs, it remains difficult in some places to create access, McGinty said.

Missouri should soon become the first state with statewide CCBHC coverage, he said.

And the state wants to know exactly how effective the new centers will be, Plunkett said.

It will be looking at the number of people who enter the program, how many get diverted from emergency departments and jails, and what treatment looks like.

"We'll be working with law enforcement to make sure these centers are doing what they're intended to do," she said. "(And identify) things we can go back and make improvements on."

One of the most significant changes that came from this budget is the investment in community health liaisons - nearly tripling the number, Plunkett said.

"The biggest problem, to me, is how stretched the (community liaisons) are," McGinty said. "Some are covering nine counties, nine courts, nine jails, probably 30-plus law enforcement entities."

A center in Jefferson City

The Crisis Stabilization Center in Jefferson City is to be installed at the Compass Health location at 226 Metro Drive. The location allows the center to offer a private entrance (from the back side parking lot) and an easy exit for first responders dropping off clients.

"Once first responders arrive at centers like this, their turnaround time is between seven and 10 minutes, and they're back on the road," Bartin said. "That's huge."

Bartin told first responders that if they had any doubts about taking a patient to the center, they can call ahead, but clinicians would prefer to see and triage the patient.

"I can't give you a bulleted list, when asked, of what exactly the criteria looks like," she said. "Because it really just depends on what's going on with that individual that day.

"Bring them to us, and we will handle it from there."

The Compass site in Jefferson City is also to have a quiet room where first responders may go to fill out paperwork, if they need.

Organizers anticipate receiving people through EMS or law enforcement, but also through walk-ins, she continued.

"You don't have to be come a Compass client to be able to stabilize and move onto whatever the next step is," Bartin said.

The facility will coordinate with its "sister facilities," she said. It's going to be at capacity at times, so staff may reach out to a neighboring center (perhaps in Columbia) and ask to bring a client up there, if the center has a slot open.

"Here's a new opportunity - a new option in our crisis continuum - to be able to get folks seen quick and have better outcomes," Bartin said. "We really do want this to be a 'no wrong door' approach."