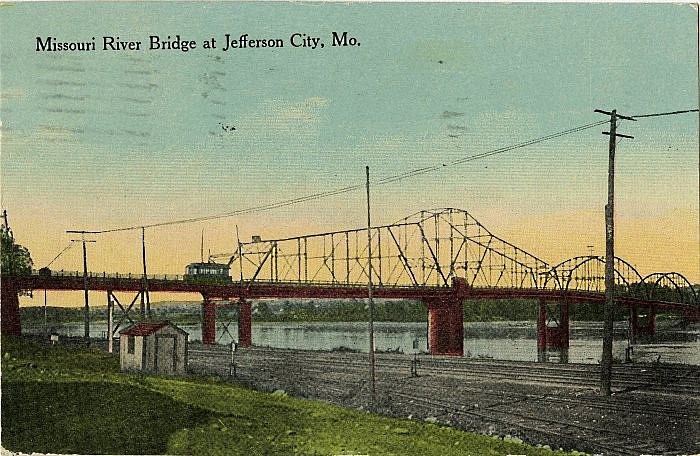 The county commissioners of Boone, Callaway and Cole counties agreed to jointly celebrate the bicentennial of the three adjacent counties, all created with the same act of the Missouri Territorial Legislature. The day selected was Nov. 16, 2020, and at a little-known site on the Katy Trail, there was a dedication of a three-sided obelisk jointly commemorating the three counties. Little did these commissioners know the site, named North Jefferson, could have been the central transportation hub for Jefferson City, Columbia, Fulton and Mexico.

In 1871, David Kennedy renamed a village across the Missouri River from Jefferson City, from Hibernia to Cedar City, as a result of the coming of the Chicago and Alton Railroad. The rail line was a spur line from the North Missouri Railroad, originating in Mexico, Missouri, passing through Fulton and creating numerous small communities along its path.

Cedar City was the terminus of that spur line, and business was such that two trains daily were required to accommodate the commerce and passenger service on the line. Each morning, one would originate in Mexico in the morning and the other at Cedar City. They would complete the transit in the morning, and then both would make the trip to their respective starting points in the afternoon.

Shortly following the construction of a depot at Cedar City a partial roundhouse was built to turn the engine around for the return trip. It required the muscle power of the residents to make the turn. When the whistle blew a certain signal, available residents of the town would show up to provide the muscle power for the turn.

The C&A rail company enjoyed a rather prospering business of commercial items and passenger service from Mexico to Cedar City, which served the Capital City. Jefferson City businesses prospered transferring people and items from the ferry landing to locations in the city.

That stable, profitable business changed rapidly in the years 1895-96 with the completion of the Missouri, Kansas and Texas Railroad, which passed just north of Cedar City in 1895, then the completion of the bridge which crossed the Missouri River at Jefferson City in 1896. As a result of the new bridge and railroad, commerce through Cedar City, mostly to Jefferson City, increased immensely.

To handle the loading and unloading of shipments and passengers it was necessary to create a new rail stop on the MK&T line approximately 1 mile north of Cedar City. The rail stop was located on the land of J. and M.L. Irvine near the current Katy trailhead in North Jefferson City. It was named North Jefferson. There is little known about the original North Jefferson, but the 1897 Historic Atlas map shows a depot at that location and it is presumed there were also facilities for fuel and water.

Shortly thereafter, the C&A rail line was extended through Cedar City and turned to the east where it terminated at the north end of the bridge on the west side. This proved to be a nucleus for business with commercial interests to grow around this location. A depot was built, and the area eventually acquired the name South Cedar.

In 1910, the bridge, through Jefferson City Bridge and Transit Company, was sold to other interests called the Kestler Group, and many new promises to the residents were a result of that sale. This included a trolley throughout the uptown district of Jefferson City with that system being extended across the bridge to a new location which would provide service to both rail lines. This depot was again named North Jefferson and was located at the intersection of the two rail lines approximately 0.6 miles southeast of the original location. The trolley was soon extended across the bridge to the new location.

The major benefit which was to occur was announced in the "Electric Railway Journal," Nov. 29, 1913, indicating the Public Service Commission had approved plans to extend the existing electric rail line across the bridge to Columbia and Mexico. These plans were made prior to the purchase of the bridge in 1910. The plans to construct this electric rail line were contingent upon financial arrangements between the rail company and the various cities involved in the rail extension. The proposition of the North Missouri Central Electric Railroad Company was it would build that rail line provided a $200,000 bonus to be raised along the right of way. Apparently, those financial commitments were not met, and the deal fell apart. That left only the electric rail line which crossed the bridge to North Jefferson, in addition to those within Jefferson City. With the loss of the extended rail lines, the reality of North Jefferson becoming a larger transportation hub disappeared forever.

Wayne Johnson is a Jefferson City native and retired engineer and chemist. He works with four local historical societies, setting up websites, digital imaging, search and retrieval of those images and compiling histories of people, places and events in Callaway and Cole counties.