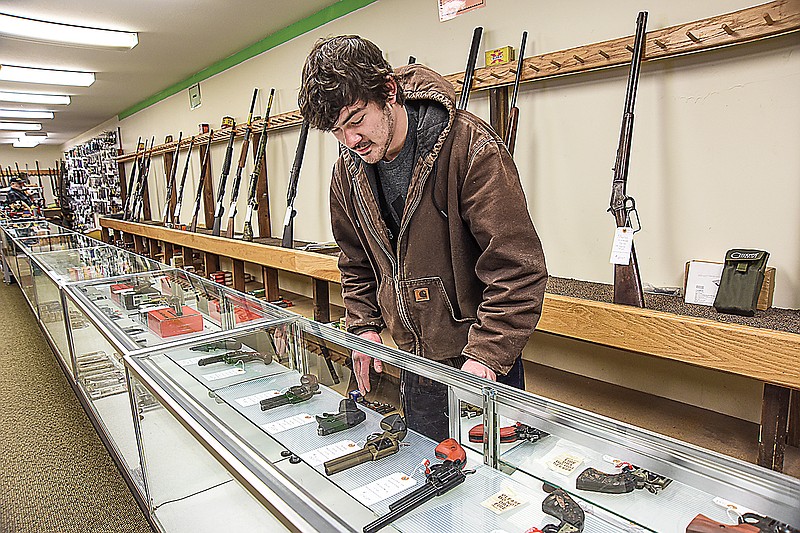 Jacob Laughlin, owner of Bogg's Creek, Inc. on Eastland Drive pulls one of the guns from the shelf of his east side Jefferson City store. Laughlin said a shipment of ammo usually sells out as soon as it's received.

2020 was a record-setting year for firearms sales in the United States.

Jefferson City area gun and ammunition shop owners said they saw the same national trends of higher gun sales in 2020 - and the pace hasn't slowed during the first months of 2021.

At Ammo Alley, just off U.S. 63 in Callaway County, owner Doug Alley said it's been hard to keep up with demand for some time now.

"Availability of guns is still the biggest factor," Alley said. "A special order is almost unheard of now. We're constantly getting phone calls looking for ammunition."

Jacob Laughlin, owner of Boggs Creek Inc. on Eastland Drive in Jefferson City, said 2020 was a record year for the business, and the interest in guns has kept up as the new year started.

"It depends on what they're after, but we do have a bunch of stuff on back order," Laughlin said.

Alley said it's not any one item people are clamoring for.

"Gun shows are taking place more frequently now, but the prices they have are very high," Alley said. "At a show I attended, a seller had 9mm full metal jacket rounds for $2 a round. That means a box of 50 would go for $100 - and people were buying those."

Laughlin noted buyers he's dealt with are looking for any ammunition and accessories, and they "getting the stuff they need wherever they can find it."

"If we don't have what they're looking for, they keep on searching," Laughlin said. "I've talked with people who have driven two or more hours just to come and pick up something we had that they couldn't find anywhere else."

Cole County Sheriff John Wheeler said the department had an increase in new and renewals of CCW permits from 2019-20.

Wheeler noted the Sheriff's Department did not issue any permits or renewals in April due to the COVID-19 pandemic.

Sheriffs recommend gun owners get CCW-permitted, as the CCW course teaches gun safety and marksmanship along with knowledge of laws regarding justifiable force.

The National Shooting Sports Foundation estimated 8.4 million people bought a firearm for the first time in 2020, accounting for 40 percent of all purchases. The NSSF also said 40 percent of 2020 buyers were women and the biggest increase of any demographic category was among African Americans, who bought guns at a rate 58 percent greater than in 2019.

Although Laughlin said the number of first-time buyers at Boggs Creek has slowed, Ammo Alley still has people signing up for new gun buyer classes.

"We also have plenty of people signing up for the conceal-and-carry classes we offer," Alley said. "We stay busy with those, but because we provide everything for those classes, we've had to pull off doing other courses because we can't get the ammunition for those. We used to get ammo by the pallet, and now we're lucky if we get one or two cases at a time."

Alley said distributors had thought, if the November election had gone in favor of the Republican Party, the surge in gun sales might have gone down by now, but with Democrats now in control in Washington, D.C., they aren't sure when a slowdown will occur.

"Anytime there are reports out about new gun laws, that adds fuel to the fire and gun- buying interest increases," Alley said.

Laughlin said that is reflected in his store's sales so far this year.

"We get people on a list for various items, and they are already sold by the time we get them in," he said.

Alley said this trend will subside eventually - but, he added, "as long as people are willing to pay some of these high prices, the manufacturers will have people to supply."