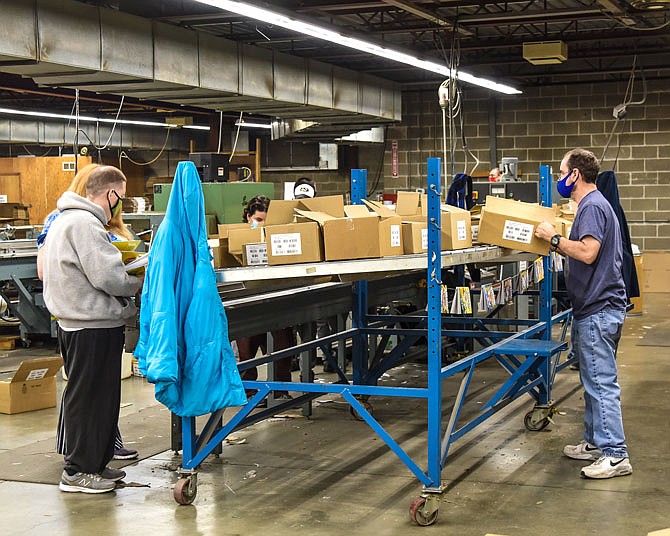 Employees at Jefferson City's Capitol Projects go about their daily tasks to complete jobs for local vendors. The sheltered workshop employs dozens of workers with special needs, some of whom currently earn minimum wage.

As details from President Joe Biden's stimulus bill emerged last week, concerns grew it would cause the end of sheltered workshops.

The workshops employ people to do a wide range of tasks that businesses couldn't afford to pay them to do at minimum wage.

The proposed stimulus bill, known as the American Rescue Plan, would eliminate Section 14(c), under which government may issue certificates authorizing employers to pay sub-minimum wages to workers with disabilities that impair their productivity for the work they perform.

Supporters of the section argue the tasks they perform are matched to the abilities of the workers. They also argue participants are grateful to be able to earn some money and that they are contributing to their communities.

DESE on Monday provided some data about the number of people involved in workshops and the scope of the statewide program.

A 14(c) certificate allows employers to pay commensurate wages to disabled people for they work they perform through a complex formula, said Mallory McGowin, chief communications officer for DESE.

The formula requires a survey of area market to gauge wages being paid by the workshop.

"The workshop either sets a piece rate or individual evaluation in the employee based off these prevailing wages," she said in an email to the News Tribune. "The certificate allows the employer to pay the employee for his or her productivity compared to the standard.

"This is done by waiving the regulatory requirement to pay the employee a minimum wage. Since many sheltered workshop employees cannot meet the productivity levels of even the minimum wage due to their disabilities, the wages they receive are often called sub-minimum wages."

So there is no minimum wage for the sub-minimum wage earners; however, DESE requires state-approved workshops pay at least 10 percent of the minimum wage.

Sheltered workshops serve more than 5,800 Missourians - with 4,518 currently employed and another 1,290 under COVID-19 quarantine protocols. The protocols come about mainly because of the sheltered workshop employees' living arrangements or because of transportation issues, McGowin said. Another 379 workshop participants have been certified for employment and are awaiting jobs.

The average working employee is 43.5 years old and has been in a workshop program for 11.3 years.

Staff and management at sheltered workshops account for another 564 full-time employees, McGowin said.

"During the early stages and throughout the pandemic, 78 of our 86 workshop corporations received essential supplier letters from their customers or directly from the federal government to continue operations due to the relationships they had directly with personal protective equipment and crucial supplies and service," she said.

Missouri's sheltered workshops program is unique in that it focuses on employment, she said. It also accepts no federal funding.

Workshops also accounted for about $65.7 million going into local economies through the purchases of utilities, equipment including trucks-vans and buses, and raw materials.

"To be employed in a sheltered workshop, the individual must have expressed clear choice to be employed; therefore, they may leave at any time," McGowin wrote. "After expressing choice they are vetted to assure they meet the qualifications for employment in a sheltered workshop. Most of the certified employees possess multiple disabilities - developmental/intellectual disabilities and mental illness/behavioral challenges are the most common examples of the multiple disabilities employees face."