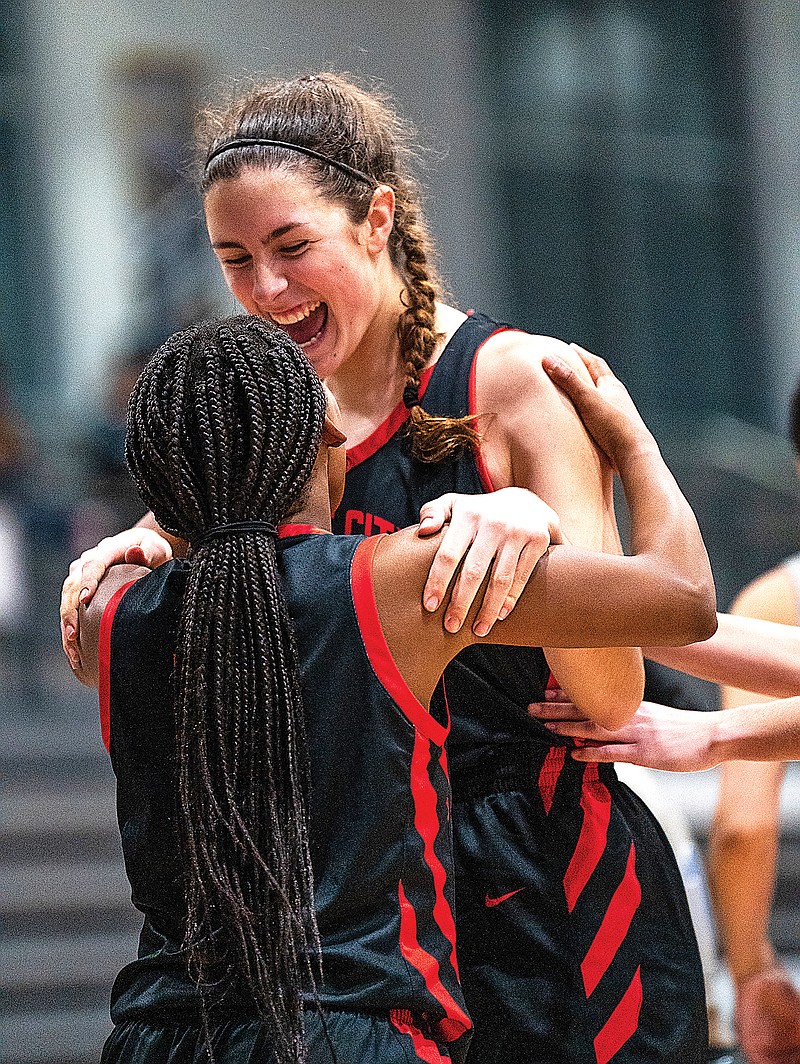 The Jefferson City Lady Jays picked up win No. 1 of the season Tuesday night.

Get win No. 2 today and the Lady Jays will win a tournament title.

“In overtime, that’s the team I see where we need to get to by the end of the year,” Jefferson City coach Kay Foster said. “What we all saw in the last four minutes is the team I know we can be, it’s just a matter of cleaning up some things.”

“Kudos to our guards, they played great defense in overtime,” Foster said. “We never really practiced what we were doing, but the kids did a great job of executing it.”

The Lady Jays had success defensively against the Lady Wolverines by putting pressure on their guards and overplaying to their right hands.

“That seemed to work and we kept doing it in overtime and it opened up the flood gates,” Foster said. “We know we have to hang our hats on our defense, defense is going to have to win us games.”

With the win, Jefferson City (1-8) advances to the today’s championship game against Helias (8-5). Helias advanced to the title game with a 60-46 victory in its semifinal Tuesday against Blue Springs South.

“That’s the dream final every year,” Foster said. “Helias is a good team, they have a great group of kids who are great athletes.

“It’s going to be fun to see how we match up with them. We’ve got a lot of stuff to do to get ready.”

The Lady Jays found their way into the winner’s bracket despite dropping a 48-42 decision to Hickman in Monday’s opening round. But Hickman had to leave the tournament Tuesday due to COVID-19 concerns, so Jefferson City took the place of the Kewpies in the semifinals.

Jefferson City found out about its good fortune around 1 p.m. Tuesday.

“Luckily, I had watched a couple of Vashon games on tape and we put together a game-plan in about 20 minutes,” Foster said. “Then we had a shoot-around, watched about 10-15 minutes of film and then we showed up here.”

Jefferson City trailed 7-3 midway through the first quarter before coming back to take a 10-9 lead going to the second quarter. The Lady Jays led by as many as seven points in the second quarter, that coming at 18-11, and took a 22-18 advantage into halftime.

The Lady Wolverines closed the third quarter strong, outscoring the Lady Jays 8-1 in the final three minutes to send the game to the fourth quarter tied at 32.

Vashon led by as many as three points in the fourth quarter, the final time at 45-42 with 1:27 remaining. But Emmarie Graham hit one of two free throws, then tied it with a basket with :40 left for Jefferson City.

Raychel Jones of the Lady Wolverines got a good look at the buzzer, but her shot rattled off the rim to send the game to overtime.

“She had a good look at it,” Foster said. “Sometimes you have to have a little luck.”

Hannah Linthcum got Jefferson City’s dominating overtime period started with a pair of free throws at the 3:44 mark. The junior, who has verbally committed to Missouri, finished the game with 27 points and 25 rebounds.

“She was a beast,” Foster said. “That’s how a Division I kid plays.”

Jones finished with 25 points to lead Vashon (5-4). Dyonna Moore added 11 points for the Lady Wolverines, who will play Blue Springs South at 4 p.m. today in the third-place game.