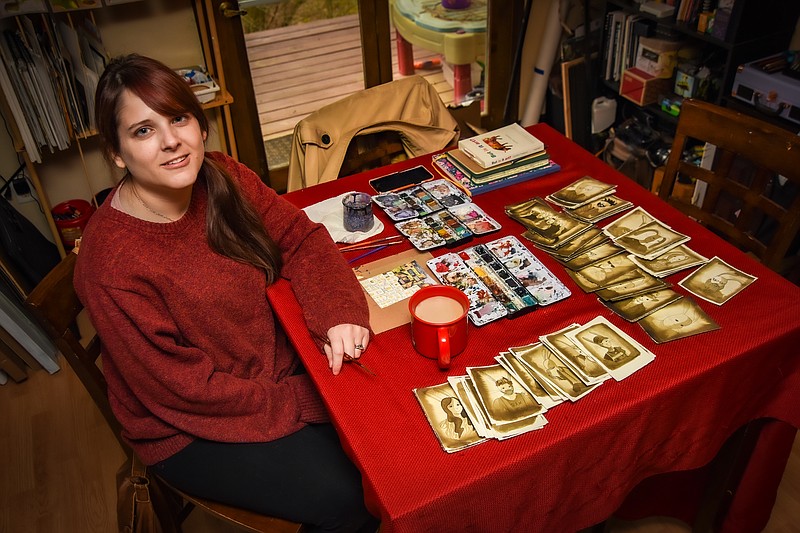 Julie Smith/News Tribune Lina Forrester is shown seated at her kitchen table, which doubles as her artist work table where she produces watercolor paintings.

The Jefferson City woman has long drawn bunnies. But it was a simple tweet during the pandemic that made her fans hopping happy, helping to fuel her growing art career.

Forrester was born in Spain, an "Air Force baby," but her family moved to Mid-Missouri when she was 3. After moving to Jefferson City, she got married and earned a degree in psychology from Columbia College. It wasn't long until she was a full-time mom.

But, despite a busy family life, the creativity from her youth followed her into adulthood. Even as a child, she loved drawing/sketching and photography. Her grandfather, a photographer, took her under his wing, teaching her the craft.

When she became a stay-at-home mom, looking for a way to make a little extra money for her family, she started painting. She opened her own Etsy shop in 2018, selling her first painting within a couple days.

She was enjoying creating "fun little bunny illustrations." Someone at the Art Bazaar told her: "These are great."

That gave her the boost of confidence to take her art to Capital Arts. Soon, her illustrations were gaining popularity there.

She won an honorable mention at her first exhibit, which took place in 2018 at Capital Arts. The next year, she had a showing at the Runge Nature Center. She also won first place, including prize money, for an entry at the Missouri State Fair.

Most of her work involves watercolor painting, and film and digital photography. Her art often features patterns with warm and muted tones, she says on her website, linaforrester.com. "But my mission remains the same: to promote playfulness and to get people talking. If that means I have to add bunny ears to a camera ... then so be it."

When 2020 came, she was ready. Her art was gaining traction, especially her landscape paintings.

"It was looking like things were going to explode for me that year," she said. "I had a business plan set out and everything."

Then the pandemic hit. "Everything got shut down," she said. "People stopped buying art."

So she started drawing bunnies again.

This summer, she messaged her fans and supporters on Twitter. If they responded to the thread by posting a photo of themselves, she would turn each of them into a bunny. About 150 people jumped at the chance to be "bunnified."

"I illustrated them all as bunnies," she said. "They thought it was the greatest thing. Everybody was sharing them with "#cottontailcult" hashtags and using them as their profile pictures."

Digital versions were free, and if people wanted the original, they just paid $5 for shipping.

The tweet stoked interest in her "bunnystrations" as well as her other bunny paintings, which often comically portrait rabbits as human-like, in lacy Victorian garb. It also fueled her interest in some of her more humorous work, including a "cat city," complete with silly puns. Her followers are voting on an official name for the city. Pawston? New York Kitty?

"I've loved the fact I could be creative and have an income," she said. "I think the making money part is the bonus for me. But the real payment is the interaction I get with the community.

She still does various other forms of art, including creating surface patterns for wrapping paper and experimenting with painting over digital photography prints.

But she hasn't stopped her bunnies or her "bunnystrations." For $10, anyone can be bunnified through ko-fi.com.

"I just love when the community comes together to laugh about something, something that's good," she said. "That's why the bunny ears work. They get people laughing, even when everything else has felt so dismal."