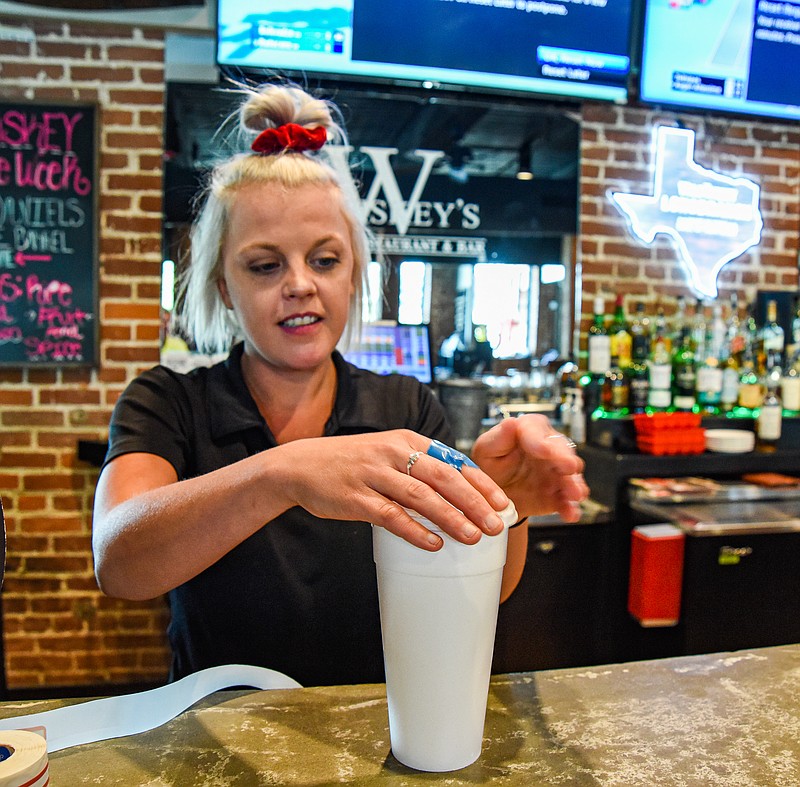 The law also extends Sunday liquor sales - previously 11 a.m.-midnight - to 6 a.m. Sunday-1:30 a.m. Monday, which is consistent with state regulations for alcohol sales during the rest of the week.

The extension of Sunday liquor sales includes sales by the drink, sales at retail stores and sales in convention centers.

To-go containers for alcohol must be rigid, saleable, cannot have openings for straws and cannot exceed 128 ounces, the law states.

Containers must also be put in single use, transparent sealed bags or sealed with tamper proof tape to indicate if they have been opened. Bars and restaurants are also required to display the company name and address on containers, as well as a warning that states the beverage contains alcohol.

Customers are required to purchase food prepared on location, classified as a meal in the new law, in conjunction with the purchase of alcohol to-go.

Bars and restaurants cannot fulfill to-go alcohol orders in amounts more than twice the number of to-go food orders and are required to provide a dated receipt.

The Missouri Department of Safety's Division of Alcohol and Tobacco first began allowing to-go alcohol sales in April 2020 in an attempt to help restaurants and bars struggling to attract customers during the COVID-19 pandemic.

The Division of Alcohol and Tobacco waiver was extended twice, allowing carryout alcohol sales through Tuesday.

State laws take effect 90 days after the end of the General Assembly's regular session - usually Aug. 28 - unless the bill contains an emergency provision allowing it to take effect immediately after being signed by the governor, or an effect date after 90 days is specified in the legislation.

SB 126 goes into effect three days before the end of the waiver, permanently solidifying carryout alcohol sales in the state.

O'Connell said the Division of Alcohol and Tobacco took an educational approach to addressing violations early on, explaining how to properly package alcohol to-go instead of writing people up.

If a bar or restaurant is found in violation now, O'Connell said, they go through an administrative hearing process in which the state supervisor can suspend alcohol licenses, revoke a license, issue a warning or impose a fine.

"It has not been a prevalent violation," O'Connell said.

According to data provided by DPS, the department has imposed fines for only seven violations since the start of the pandemic: one $100 fine, three $200 fines, two $400 fines and one $500 fine.

Tom Mitchell, general manager at Big Whiskey's American Restaurant and Bar, said the Jefferson City location will be offering alcohol drinks to-go, even if it's not well advertised.

Mitchell said Big Whiskey's took advantage of the state waiver and began offering alcohol with carry out orders during the pandemic.

"When it was just sort of standing room only - or to-go only - we were putting (carryout alcohol) on our website as far as an option to try and increase sales, but now we just, you know, if somebody asks for it we find a way to do it," Mitchell said.

Despite offering its full drink menu to-go, Mitchell said he doesn't expect carryout alcohol sales to have much of an impact on business at Big Whiskey's.

"It never really helped that much," Mitchell said. "People just don't ask for it very often."

Mitchell said the restaurant is also having supply issues, making its to-go cup with a logo difficult to keep in stock.

O'Connell said he's heard the popularity of carryout alcohol orders has waned as vaccinations become more common and people have returned to dining in.

Scott Drinkard, owner of Spectators Sports Bar and Grill, said last month he likely wouldn't be changing operations at any of his five locations as a result of the new law.

Drinkard said Spectators isn't well set up for carryout alcohol orders, but he would be interested to see how other bars and restaurants react to the permanent change.