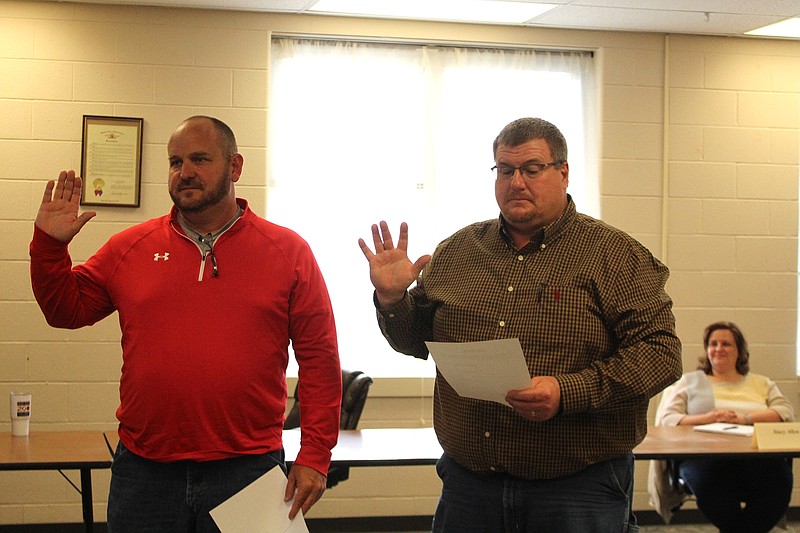 Former Board President Terri Sweeten and former member Amy Pendleton left the New Bloomfield R-3 School District Board of Education. As a result of the April 6 municipal election, Craig Abbott and Doug Glick joined the board.

With the new members seated, Tod Schattgen and Stacy Allen were nominated for the position of board president. Abbott, Glick, Schattgen and Josh Woods voted for Schattgen, while Allen, Gina Clark and Angie Robinson-Sullivan voted for Allen.

After Schattgen was chosen as board president, board members were again split over the choice of vice president. Woods and Robinson-Sullivan were nominated. Robinson- Sullivan received votes from herself, Clark, Allen and Abbott.

The board voted to approve bids for the roof and parking lot projects but is still discussing the concession stand.

The approved roof bid was with Watkins Roofing for $53,389. Materials for the project, which includes gutter work, will cost $64,093.

For paving the parking lot, the board approved a bid with Frech Paving for $91,820. Contractors will overlay the north road by New Bloomfield High School, remove speed bumps and seal the parking lot.

The district hoped to build a new concession stand and restroom, but costs have come in higher than expected.

"We thought we had a doable project cost," Schattgen said, acknowledging the discrepancy.

Bextermueller estimates the project as originally imagined would cost $521,208 - twice as much as expected. The difficulty of laying water and sewer lines is a large part of the cost, Bextermueller said.

Another complication is making the concession stand accessible as the current location is on a slope.

Board members were not enthusiastic about the cost and began brainstorming ways to make the project more feasible.

"That's not a good expenditure of money," Glick said. "There's got to be an alternative to that."

Abbott suggested seeing if there was a way to transform a storage space currently owned by the district into a concession stand and perhaps purchasing a replacement storage building.

"One issue that I kind of thought about was the red barn that's up there," Abbott said. "We currently have a structure. What about running the utilities to that and turning that into a concession stand?"

Bextermueller was left with several possibilities to research. The project will come back before the board in the future.

The board approved extended school dates for remediation before summer school.

From June 7-18, some students who are significantly below grade level will be invited to catch up. The effort - funded by COVID-19 relief dollars - aims to help close achievement gaps caused by the pandemic and interrupted school.

Though Superintendent Sarah Wisdom said the district has not seen substantial learning loss, some students are struggling, particularly in the kindergarten and first-grade classes.

When school shut down in spring 2020, current first-grade students missed out on the last quarter of their kindergarten year, a time when students typically make big strides in literacy. The interrupted school year also meant the district didn't hold any students back.

"We did not retain anybody last year," Wisdom said.

There will be three elementary classes and one middle/high school class for the remediation. The district hopes participating students will improve enough that they will be successful in the next grade level.

"These parents are very aware of our concerns," elementary principal Jennifer Fletcher said. "I have spoken personally to most of them or sat in on the parent-teacher conference. We would only do the ones we've identified as significantly below grade level. These are the same kids we brought to Monday Academy - we're doing after-school tutoring, we're doing everything we can to not have to retain them."