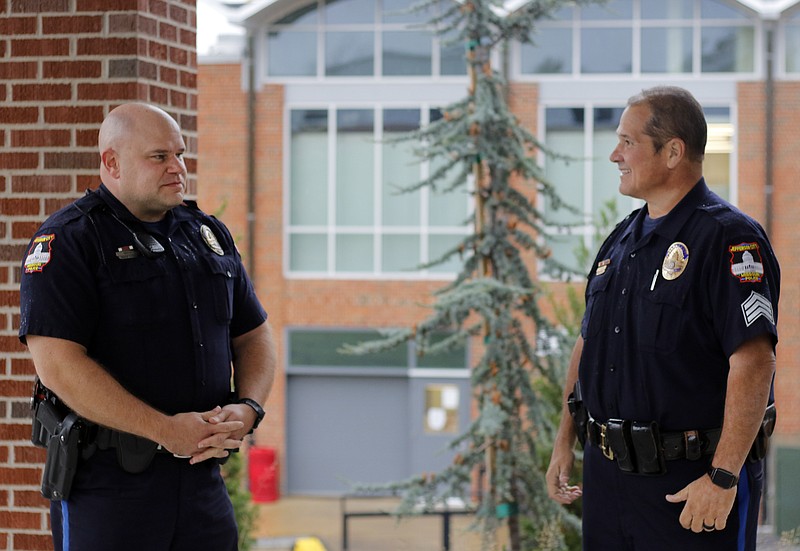 The main role of school resource officers is to provide security and build relationships with students - but some schools are eliminating them out of concern they present more of a threat than protection.

For most area schools, the presence of a school resource officer provides more benefits than disadvantages, educators say.

But shortly after George Floyd's death in Minneapolis, school boards in several cities voted to end their contracts with police departments, including Minneapolis, Oakland, California, Denver and Milwaukee, after the movement to defund the police gained momentum.

Nationwide, Black students are 3 1/2 times more likely to be arrested within school than white students, despite exhibiting similar behavioral patterns, according to the American Civil Liberties Union.

Carolyn Randazzo, a retired teacher who chairs Metropolitan Congregations United's Education Task Force based in St. Louis, said school resource officers are unnecessary. The task force is part of the Break the Pipeline Campaign that aims to end the school-to-prison pipeline.

"There are some (school resource officers) who are very good, who are members of the community that are really there to work with the students and to have a relationship with them - but so many of them aren't," Randazzo said.

A study by the Brookings Institute in November 2018 showed there was no discernible correlation between school resource officers and school safety.

School resource officers, who can arrest and use force on students, have disproportionately targeted low-income Black and brown students, LGBTQ students and students with disabilities, according to the Institute for Policy Studies report.

Seeing police officers in uniform at school may have an adverse effect on students of color who have had negative experiences with police officers, Randazzo said.

"If they've been in the car when their parents have been pulled over for no apparent reason other than the color of their skin, they don't have the feeling that this person is someone they can go to when they have problems or when they don't feel safe," she said.

This environment can lead to trauma and stress that contributes to behavioral problems and crime in students, she said.

In 2017, Black and Latinx students made up 40 percent of the U.S. school population, but they made up 58 percent of school arrests.

During the 2015-16 school year in Missouri, Black students were more than four times as likely to be arrested at school compared to their white peers, according to the American Civil Liberties Union.

Instead of having police in schools, Randazzo said, schools should use that money to put different measures in place to help students and prevent crime and violence.

"It would be safer for kids if there were more counselors and social workers to work with the kids to work through their problems and to make behavior changes that they might need to make to be more successful in school and to not get into situations that might turn violent," she said.

On the other hand, others believe school resource officers provide more benefits than disadvantages.

Blair Oaks R-2 School District Superintendent Jim Jones said he used to believe the need for police in the schools could be a sign of weakness and an indication that the school is in poor condition.

Over the years, his viewpoint changed, and he now believes students feel safer when a school resource officer is on campus.

"I have since changed my viewpoint from a sign of weakness to a sign of strength," he said. "Learning can only occur when students feel safe in their environment. A school resource officer cannot stop all acts that may go on in a school, but they can relieve the anxiety that exists when they are not present."

They sometimes arrest students and bring them to the juvenile detention center for crimes such as a serious assault or bringing weapons to school. A juvenile officer then decides what action to take from there, Matherne said.

The school resource officers try to release the student to a parent and refer it to the juvenile office when possible, he said. They also try to calm the student down by talking to them and bringing them outside of the school environment, which usually works, JC Schools SRO Chris Gosche said.

But in cases such as an assault where somebody was badly injured, the officers will usually take them to the juvenile office, he said.

Just as most people slow down or check their speed when they see a police officer while driving, the visual presence of a school resource officer helps student behavior, JC Schools Safety Director Frank Underwood said.

"The physical and visual presence of an SRO can help to curb unruly behavior or even prevent some spontaneous actions by allowing a student to think, even if just a few seconds, about an act they may have thought they were going to carry out," Underwood said.

The presence of a school resource officer can also prevent situations such as school shootings, Jones said.

"If you're thinking about doing something that may not be in the best interest of students, if you see a law enforcement officer's vehicle near the school, you might rethink that," Jones said.

Two of the school resource officers in the Jefferson City School District undergo active shooter training and provide the training to school staff and the police department.

Another benefit of having school resource officers is they are on site and ready to respond immediately.

The response time for Blair Oaks and rural Cole County schools is estimated to be seven to 20 minutes depending on the location, Jones said - which may not be enough time if the schools didn't have resource officers.

"You have somebody who is trained in emergency response - whether it be CPR or just first aid or something much worse - and they know the layout of the building," Underwood said. "They can be there within seconds instead of minutes or tens of minutes."

School resource officers also go to classes to teach students about topics such as law enforcement career opportunities, drugs and constitutional law; and they assess school safety measures, offer suggestions for improvement and answer questions from staff, students and parents.

"We get a lot of parent phone calls about stuff that happens outside of school that's not really something administrators can handle," Gosche said.

Another role of school resource officers is to build relationships with students and staff and act as a mentor, advisor and positive role model to students.

Matherne said this is beneficial to solving crimes and creating a better life for the student. Many people stay in contact with the school resource officers and reach out to them later in life, he said.

School resource officers have a community policing mindset with a focus on building relationships with students and community members and being a trusted adult for students to go to, Underwood said.

"Having SROs helps to build and maintain additional positive relationships between students and adults in our buildings and allows students to make connections with law enforcement officers," Underwood said. "It gives them somebody to go to if they need to get something off their chest or they just want to express how they're feeling today."