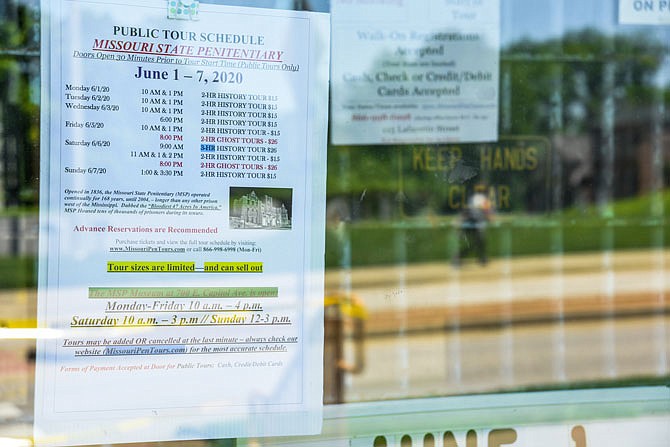 Signs at the entrance to Missouri State Penitentiary indicate the CVB will resume history tours beginning Monday, June 1, 2020, and Ghost Tours Friday, June 5, 2020. Like most everything else in recent months, tours were halted due to the worldwide pandemic.

As state and local leaders continue to assess the impact of the COVID-19 pandemic on tourism, both sets of authorities have said it's likely there will be an increase in people who travel by car instead of by plane.

Stephen Foutes, director of the Missouri Division of Tourism in the Department of Economic Development, recently told the group led by Missouri State Treasurer Scott Fitzpatrick - tasked with making recommendations on how to spend federal COVID-19 aid - that roughly a third of the workers in Missouri's tourism industry had filed for unemployment during the pandemic.

Local hotel demand had begun to decrease in March - as news of the severity and scope of the pandemic became increasingly apparent, and business and other daily activities slowed down - with local hotel occupancy for that month being at 41.6 percent, compared to 56.7 percent in March 2019.

He also presented data from Tourism Economics - a tourism research company based in Philadelphia that's of the larger Oxford Economics Ltd. economic research firm based in the United Kingdom - showing approximately $2.16 billion in tourism spending had been lost in Missouri between Feb. 29 and May 9, compared to the same time frame last year.

Tourism Economics reported the tourism industry had an approximately $17.7 billion impact on Missouri's economy in the 2019 fiscal year, Foutes said.

In Jefferson City, some major local events have been rescheduled for later in the year, and some major indoor local attractions such as museums and government buildings remain closed or have suspended tours - though the historic Missouri State Penitentiary is scheduled to open its museum and resume tours Monday.

Though the state began easing public health restrictions on business and daily activities May 4, Jefferson City CVB Executive Director Diane Gillespie said it's too early to tell if there's been any significant return of visitors to Jefferson City.

"Individuals are beginning to ease back into the travel planning period; we feel many people will start traveling more later this summer," Gillespie said.

"We are seeing travelers not venturing as far from home now, so we will likely see a rise in those traveling by car, thus seeing an increase in our drive market tourism," she added.

Gillespie said she expects more people to travel for outdoor experiences, such as the Katy Trail and Binder Lake, "more now than ever before."

Foutes also told the News Tribune it's difficult to say how long it might take for tourism to bounce back, but "research indicates people are going to be more likely to stay closer to home and to travel by vehicle rather than by air in the near future. Additionally, road trips and outdoor destinations - which Missouri has in abundance - figure prominently in people's travel plans."

"Missouri enjoys high levels of in-state travel and its geographic location makes it an easily drivable destination for the eight states with which it shares borders," he said.

Still, it's not necessarily enough for attractions to be open and events to proceed for things to return to normal. The novel coronavirus that causes COVID-19 can as easily travel via a driver or passenger in a car as it can via a person on a flight.

"Certainly, travel is reliant on consumer confidence. The research we have suggests traveling to a destination with low or no cases of COVID-19 and high levels of social-distancing compliance as being key for travel decision-makers," Foutes said.

"Additionally, consumers need to be assured the businesses they visit have enhanced their cleaning and sanitation procedures to comply with the most current recommendations," he added.

Given how severe the economic impact of the pandemic has been - particularly with unemployment or other hits to people's hours and pay - it's also not clear how many people might be able to afford to travel.

"Our research shows about 34 percent of consumers have changed or indicated they are likely to change upcoming travel plans due to financial issues," Foutes said.

He said it's difficult to make comparisons with the Great Recession in terms of what to expect for recovery because the economic decline caused by the pandemic "has been so steep and so sudden, as opposed to one that may have evolved more slowly."

"That said, tourism has the potential to play a major role in economic recovery as businesses realign their products to meet consumer demand and travel restrictions continue to be relaxed," he added.

He told Fitzpatrick's group the industry is "on the way to gaining customers," but support is still needed to fund marketing efforts that will get a steady stream of tourists coming back.