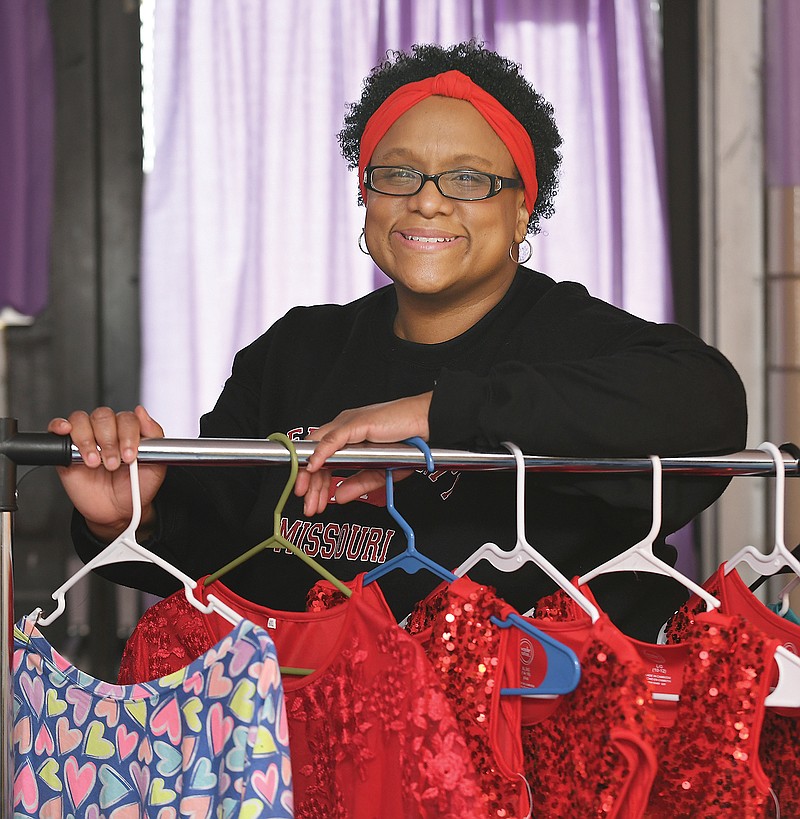 Sitting in a room filled with colorful costumes and children's artwork, Rhonda Allen wiped away tears as she talked about how proud she was of a student.

As a behavior interventionist, Allen played a role in helping this child improve her behavior by teaching her how to properly communicate her emotions.

"To see this little girl really change her behavior is the best part about my job," Allen said. "That's what keeps me coming back every day. I feel like we're really making a difference."

Allen said she lives by the motto to teach children how to be productive citizens.

"As a productive citizen, you have to be able to control your emotions and work through things," she said. "So when I feel like I'm setting them up to be successful outside of these walls, there's nothing better than that."

Allen loved playing school as a child, and she loved working with children in high school, but she always said she didn't want to be a teacher. Her mother was a teacher at the Jefferson City School District for 37 years.

"I always said, being a teacher's kid, I never want to be a teacher, because her life is just really dedicated to her job," Allen said.

After studying broadcast journalism at the University of Missouri, she quickly realized it wasn't what she was meant to do. She transferred to Lincoln University and decided to major in elementary education to see if she would enjoy it. It was a perfect fit.

"I never felt like I was doing schoolwork because I loved it so much," she said. "I feel like I have a natural knack for working with children."

Allen began her career as a temporary teacher at East Elementary School for two years. She then taught at Thorpe Gordon Elementary for 14 years.

Two years ago, she became a behavior interventionist at Thorpe Gordon. Her goal is to eventually be a principal.

She was named the district's Teacher of the Year in 2017.

Allen said her greatest passion is teaching children to be kind to others and making sure they know she cares about them - because students often don't get enough love at home.

She said her proudest accomplishment is when her former students thank her for helping them through tough times. One of her second-grade students struggled with the loss of his mother after she died of breast cancer, and he often thanks her for helping him through it.

"When kids come back and say thank you, I feel like there's no paycheck that can ever top that, knowing that you have shaped somebody you know that's doing well in the world," she said.

When Allen isn't working, she can often be found singing. She sings at church, weddings and other events, and she loves singing karaoke.

"I always was the kid that, when my parents would bring people over, I'd always want to perform for somebody or sing for somebody," she said.

Allen knew she wanted to be involved in theater after she played the trombone in a band scene for a musical her freshman year of high school. Every year after that, she tried out for the operettas.

Eight years ago, she became involved in community theater when she played an evil stepsister in "Cinderella" at the Little Theatre of Jefferson City.

Teaching at a high-poverty school where the children don't typically get to experience live theater, Allen wanted the students to have a chance to participate in it.

"I kept thinking, I love this so much, so how come I can't bring this to my school?"

Ten years ago, Allen created a drama club at Thorpe Gordon - the only Jefferson City elementary school that has a theater group. Her goal is to also start a community theater group for children who are in poverty.

She said drama club is not only fun - it teaches children public speaking, reading fluency, self-esteem and self-discipline. She also takes students in drama club to children's productions in the community.

The Thorpe Gordon Drama Club is working on a 10-year anniversary musical called "That Motown Sound" with a script Allen wrote. Twenty-six students will be in the musical, including four middle school students who used to be in the drama club. The rest are in fourth and fifth grades. These students were chosen by community judges after auditioning with a monologue and song.

"That Motown Sound" is about a grandmother who goes back in time to tell her grandchild about her high school days, incorporating songs by The Supremes, the Jackson 5, Martha and the Vandellas, the Temptations, and Stevie Wonder.

"Knowing that they will be performing a script that I produced feels like a wonderful accomplishment," Allen said. "As a child, I always wrote stories, poetry and plays of my own, so now it just feels almost surreal that, finally, a group will be performing something that I wrote."