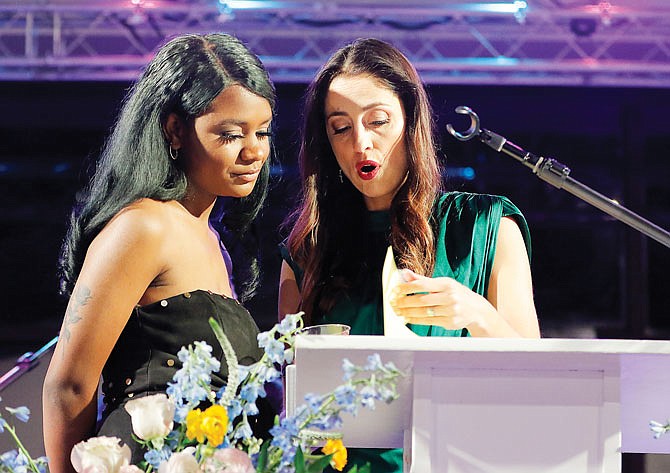 Rebecca Welsh, right, goes over the evening itinerary with Marjai Neal on Friday at the HALO Foundation's annual ArtReach Auction at the Capital Bluffs Event Center. Neal, a HALO Foundation beneficiary, performed a spoken word poem later in the evening.

Marjai Neal was homeless and only 9 when she - now a 19-year-old freshman at the University of Missouri - came into the fold at HALO in Kansas City.

Staff there raised and mentored her.

"HALO is my dream home," Neal said. "My dream world. My dream environment."

Now, Neal's spoken-word poetry takes her across the country.

She's traveled to New York City, Chicago, San Francisco, Houston, Atlanta and other cities. And the art has taken her outside the United States.

Neal's love of words led her to major in journalism at the university.

In its 15th year, the nonprofit organization supports homeless and at-risk children, with branches in Jefferson City, Kansas City, New York City and Portland, Oregon. It also has a global reach.

The organization began a Transitional Living Program in 2014, to address homelessness among teenage girls. In 2016, the organization moved into the former Rickman Center property, where it can reach up to 30 girls at a time.

HALO set out on a new venture in Jefferson City last year when it began renovations of a home that is to become a "house for boys." The house is intended to give boys a "stable, safe place to go at night" after school. It will begin accepting high school boys from Jefferson City high schools this month, said Darian Pruitt, the house's site and programs manager.

As with the home for girls, boys in the house are expected to attend family-style dinners, complete school assignments or do chores.

The very first homeless Jefferson City girl HALO took in, Caylin Smallwood, attended the auction. Smallwood's story is all-too familiar - she was pregnant at 14, drinking alcohol and abusing drugs. When she found out she was pregnant, courts put her in a rehab program.

Smallwood was 15 and had a daughter when her parents released custody of her to HALO, she said.

After she left the home, HALO continued to support Smallwood, she said. Staff helped her prepare for and get into college. She'll graduate in April from Columbia College with an associate's degree in business.

They also helped her prepare a resume for, and connected her with human relations at ABB, where she now works.

"It's been three to four years since I was in the program, and they're still helping me," she said. "They continue to help."

Unlike the girls' home, the boys' house is an after-school place where the boys can do homework, play games, participate in sports or even learn trades. Boys are expected to arrive at the house about 3 p.m. and stay until 8 or 9 p.m.

Pruitt has been meeting with teachers, coaches and students at the city's high schools and creating partnerships they hope will inspire boys to participate in the program, he said.

The ArtReach Auction showcases artwork created by clients at the HALO girls' home and by locally and nationally recognized artists. It annually starts with a silent auction of items donated by local businesses.

During the auction, the organization also recognized people who have made a difference for HALO over the past year.

The organization named Lisa Washburn its Volunteer of the Year for the girls' home.

Washburn volunteers at least once a week at the girls' home.

"I help out in the office or take the girls places or just do what I'm told," Washburn said. "I kind of do a lot of organizing and cleaning and what nobody else has time to get to. Whatever is a priority that day."

Washburn said she feels like her role is to free up other people to do other work.

It named the Host Lion's Club its Volunteer of the Year for the boys' house. Members of the club have spent months working on renovations to the house.

Rebecca Rademan is the nonprofit's Advocate of the Year.

Sue and Clyde Lear, of Learfield Communications, received the organization's Supporters of the Year award.

"I love what they do," Clyde said. "Sue and I are supporting these kind of activities in our community. What (HALO is) doing with young women, we're excited about. They've started this boys' house, which is really a wonderful, wonderful thing."

The Lears are lifetime residents of Jefferson City they said, having both been born at St. Mary's Hospital the same year.

They've created a place for boys who don't have family connections or places to live.

Darian Pruitt may be a father figure to many of the boys, he said.

"We love Darian," Clyde said. "And we love what they're about."