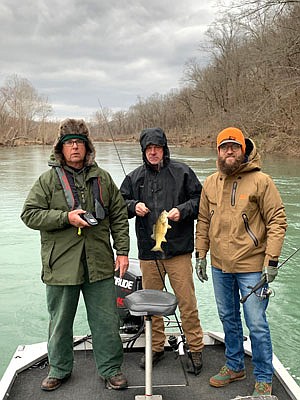 (From left) Billy Smith, Clay Newcomb and Hal Herring prove winter smallmouth bass fishing can be hot when the weather is cold.

Some trips are a must do every year. For me, fishing the Current River in the winter with Billy Smith is at the top of that list.

Smith owns and operates Scenic Rivers Guide Service and Tours, and no one I know has a better grasp on boating cold weather smallies than he does. With friends in from Montana and Arkansas, I knew there was no better way to show them a good time than going on the river with Billy.

Hal Herring and Clay Newcomb are both well respected members of the small outdoor media profession. Herring is a longtime writer, with bylines in most of the big magazines, like Field and Stream, Bugle, Nature and more. He hosts the Backcountry Hunters and Anglers podcast.Newcomb owns, publishes and edits Bear Hunting Magazine, and hosts the Bear Hunting podcast.

We all gathered at my place in Shannon County, and even through time was limited, we squeezed in a couple of hours with Billy on Current River launching out of the Two Rivers Access.

I had to introduce my friends to the river and this special fishing guide. We landed about 25 fish in only two hours.

Smallmouth bass are one of the most prevalent game fish in North America. Often regarded as the pound-for-pound toughest fighting fish around, these aggressive bass are found in lakes, reservoirs, rivers and streams from Maine to Montana and Alabama to Oregon.

Missouri certainly has more than its fair share, too. Although smallmouth may grow larger in reservoirs, many smallmouth anglers prefer chasing them in rivers. Smallmouth are a warm-water fish, but winter is the time to stack up numbers.

Chances are there is a smallmouth river within a short drive of your home. If you are not aware of any, explore the Missouri Department of Conservation website or call your local fisheries biologist. They will clue you into the best smallmouth waters around, but keep in mind, most rivers in the southern half of Missouri are going to hold smallmouth.

Locating smallmouth in rivers during the winter is fairly easy. Since most rivers are fairly shallow, finding deep pools of water is your key to success. Deep water can usually be found on the inside of a bend, behind boulders and around large fallen trees. Once you have located prime holding spots, you'll want to thoroughly work these pools from the outside in. This way you can cover the pool in its entirety.

Smallmouth are active throughout the year. The pre-spawn period generally kicks in during late February when water temperatures push into the upper 40s. Largemouth are still lethargic, making smallmouth the bass to seek during this time period. The pre-spawn smallies congregate on points and in deep holes, especially those consisting of a pea gravel bottom near cover.

Smallmouth begin to spawn once water temperatures reach the 60-degree mark. This is typically around the middle of April. They'll bed on gravel flats, while generally associating with some sort of structure, such as fallen logs and boulders. Females spawn out and leave the beds to recuperate in deeper water, leaving the smaller but more aggressive males to guard the nests. Any lures retrieved near enough to the nest to pose potential danger have a good chance of being hammered.

Strikes can be subtle during winter. Pay attention to your line, as there is a good chance you will see strikes before feeling them. Experiment with speed and retrieves but keep your bait on the bottom. Make numerous casts through prime areas and over promising points before abandoning hope and moving on. The action may not be fast, but during the winter you can find a bunch of smallmouth bunched up in a single deep hole.

Winter is a fantastic time of year to fish for smallmouth bass in rivers. Give winter fishing for smallmouth a try this winter. No matter what happens, it's going to be more fun than sitting on the couch. Catch a few, and chances are you'll be hooked.

No fish fights harder than smallmouth bass. They are so much fun to catch, and when you can catch as many as we did, it's hard to argue that anything could be more fun.

Wading streams in the summer may be my preferred way to target these fighters, but I'll take a cold winter day on the river instead of one on the couch. Smallmouth are a four-seasons fish.

Brandon Butler, the director of communications for Roeslein Alternative Energy, is an outdoors columnist for the News Tribune. Contact him at [email protected]