It's time to talk about ticks and mosquitoes 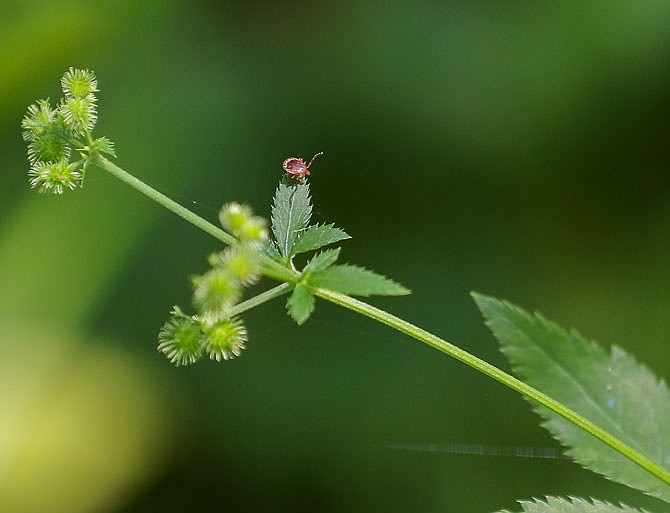 A male tick sits on a leaf Tuesday at the Runge Nature Conservation Center. The tick was performing a behavior known as "questing," in which the arachnid stretches out its arms in order to latch onto a potential host as it brushes past the plant.

If you want to enjoy Missouri's trails, lakes, rivers and other outdoor activities, consider arming yourself against ticks and mosquitoes.

Outdoor enthusiasts are aware of products that use permethrin, an insect repellent that is sprayed on clothing, gear and tents, said Becky Matney, assistant manager at Runge Nature Center. Permethrin is not to be used directly on skin.

"If you're fishing, hunting, scouting, this is what you would use," Matney said. "At Missouri Department of Conservation, if we're doing outdoor field work, our clothes are treated with permethrin before going out in the field."

If nothing else, go to an outdoor recreational store and buy permethrin-treated Bugout Gaiters to wear around your ankles before going into the woods, which may be washed up to 60 times before they lose their potency.

Matey offered the advice as the Missouri Department of Health and Senior Services released a reminder this week that during the tick and mosquito season, it can be fairly easy to prevent insect-borne illnesses.

Illnesses from bites can be severe and in some cases cause death.

West Nile virus is the most common illness spread by mosquitoes in Missouri. Up to 80 percent of people infected with West Nile virus will not develop any symptoms, according to the Centers for Disease Control and Prevention. There were five cases of West Nile virus reported in Missouri in 2019. (The five-year average was about 20.)

DHSS receives reports of tick- or mosquito-caused illnesses throughout the year, including during the winter; however, it is more frequent during the summer.

It may be early in the season, but the Cole County Health Department has already received reports of tick-borne illness, Director Kristi Campbell said.

"The best way to protect yourself and your family from the diseases carried by ticks and mosquitoes is to avoid their bites," the DHSS news release noted.

The department encourages everyone to protect themselves by using insect repellent, wearing long sleeves and long pants when weather allows, and performing tick checks after being outdoors.

Stay away from brushy areas, tall grasses and leaf litter to avoid ticks. Try to stay in the center of trails when hiking. After returning indoors, check your body carefully for ticks.

Eliminate mosquito habitat around your home. Drain standing water found in toys, buckets, flower pots, gutters or other items that may collect painkiller or rainwater.

Check window and door screens around the home. Repair holes or replace screens as needed.

Health departments recommend using products with 25 percent or more DEET when in areas with ticks and chiggers, Matney said.

The University of Michigan health blog says DEET may be used once a day on children 2 months or older.

To avoid ticks on the trails at Runge, stay near the center of the trails when walking, Matney said.

"Ticks and chiggers are on the sides. And we do try to maintain a mowed area along the sides of trails, so when people are walking along them, they won't be brushing up against (plants)," Matney said.

Ticks quest - they travel to a part of a plant, turn upside down on the plant, and put their legs out and wait until something passes by and picks it up, she said.

Ticks have three life cycles. They go from a larval stage, which people recognize as a "seed tick," she said. They have to grab onto a host and engorge themselves on blood, then drop off and molt.

Their second stage is the nymph stage, she said. They again find a host and engorge on blood, then drop off and molt into the adult form.

"The adult form is where they have to engorge enough blood in order to mate and lay eggs," Matney said.

"You get into deer, dogs and foxes, and things like that," she said.

In Missouri, there are several ticks that pass on disease pathogens, she said.

Lyme disease is rare in Missouri. It is associated with the white-footed mouse, which is uncommon in the state.

If a tick attaches to you, use fine-tipped tweezers to grasp the tick as close to the skin's surface as possible. Pull upward with a steady, even pressure. Do not twist or jerk the tick.

Print Headline: It's time to talk about ticks and mosquitoes