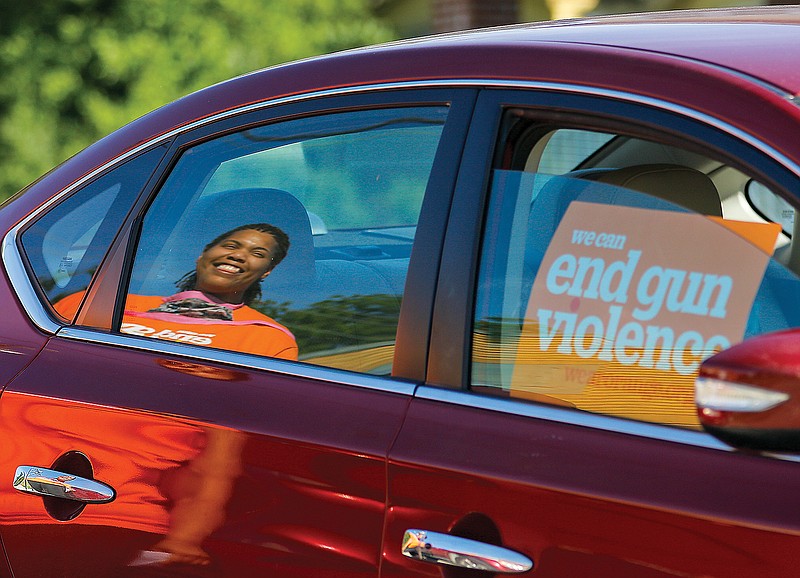 Alicia Edwards, reflected in a Moms Demand Action member's car, walks up to unload groceries from the trunk during the "food pantry parade" Tuesday, June 2, 2020. The food was given to Building Community Bridges.

Cars decorated with orange streamers, balloons, stickers and signs took turns stopping to unload their donations following a short procession from Central United Church down the road. Volunteers lost count of the number of cars but estimated it to be around 35.

The event was organized by Jefferson City Moms Demand Action for Gun Sense in America and Capitol Area Missouri National Organization of Women. The Wear Orange Food Pantry Parade was held to not only donate goods to the local nonprofit but draw awareness to gun violence.

Members of MDA and CAMNOW wore orange shirts, masks, pins and other accessories as they donated from their orange-decked vehicles. The orange color is meant to honor the victims of gun violence - a symbol that began after the 2013 shooting death of 15-year-old Hadiya Pendleton in Chicago, whose friends wore orange following her death.

Debbie Crossnoe, co-lead with MDA, said MDA partnered with Building Community Bridges about a year ago.

"Gun violence affects people of color disproportionately - they are more affected - and so are people in areas that are maybe economically depressed, so we started looking for somebody like that that we could partner with," Crossnoe said.

Building Community Bridges was established to aid youth in the community. The nonprofit also provides resources for low-income residents including a weekly food pantry 10 a.m.-2 p.m. Thursdays. The food and other products donated Tuesday will go into that pantry.

"Our mission statement hasn't changed," Wright said. "We're here to uplift and encourage the community and continue to build the infrastructure in our community."

Building Community Bridges Executive Director Alicia Edwards said the event and the partnership are a chance for education.

"With as much that goes on within low-income communities, and particularly in our community, we want to make sure everyone is aware of gun safety and this group, Moms Demand Action, is here to provide tips on gun safety - how to make sure that your gun's locked up, how to make sure your child isn't a victim of a senseless crime because you didn't know how to protect yourself," Edwards said.

The event is also a chance to promote the group's message while providing for the community. The drive-thru style was adapted to follow COVID-19 pandemic guidelines of social distancing.