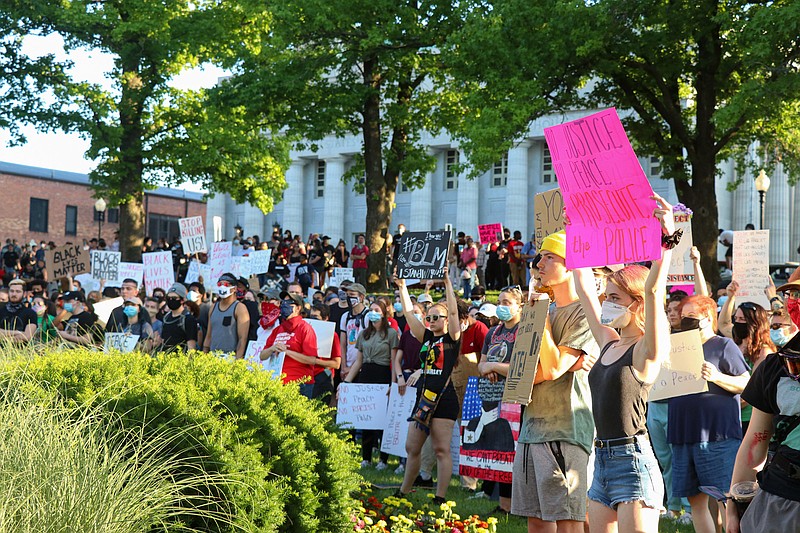 Hundreds of protesters gather at the Missouri State Capitol in Jefferson City for the Rally for Black Lives on Monday, June 1, 2020.

More than 1,000 people gathered Monday night in Jefferson City to speak up for their black neighbors - and pointing to the Missouri state Capitol to say the decision-makers in state government do not listen to the voices of black people.

The events were held in light of the May 25 death of George Floyd, a handcuffed black man who was filmed pleading for air as a white Minneapolis police officer pressed his knee against Floyd's neck for several minutes. The officer has been charged with murder.

"It's good to see Jefferson City and Mid-Missouri are concerned about civil rights violations that are happening here and around the country," said Nimrod Chapel Jr., Missouri NAACP president and one of many who spoke at the gathering. "This is a good cross-cut of the community because we have black and white along with young and old residents. It's a great opportunity for people to come together, and we'll see if some of the issues are addressed."

Back-to-back events held on the southeast lawn of the Capitol were intended as peaceful protests, although Jefferson City police later reported a few incidents of property damage in the downtown area afterward.

Nicki Wooten, of Columbia, was among the first to arrive to the first event, called "Rally for Black Lives." She had been to a similar event in Columbia last week and hoped this was the start of changes in how society deals with race matters.

Wooten works at a Department of Corrections facility in Fulton, and "there's a lot of people in there, both working and incarcerated, who have some of the same beliefs, and I'd like to represent them today," she said.

Others did not wish to fully identify themselves.

A woman who identified herself as Kari, of Central Missouri, said, "I'm angry and I feel very passionate about this issue. I believe every human has the right to be a human, and they don't need to be policed to the level they are policed now. I think anyone, of any age, can support causes they believe in. The younger generation is maybe more vocal about it, and I think that is a good thing."

When the event started, there were 300-400 people in the crowd. But as the evening progressed, the crowd grew. The group heard several speakers talk about how they had suffered from racism, and there were many chants led, including "Black lives matter" and "No justice, no peace."

Organizers urged those in attendance to vote today in municipal elections and in the August and November elections as one of the best ways to affect change - by putting in representatives to government who believe as they do on these matters.

Around 5:30 p.m., armed law enforcement officers wearing protective head gear and carrying shields began forming a line along the sidewalk in front of the Capitol and in the rear of the area where the event was being held. Street traffic continued to flow along High Street during the event.

Some in the crowd began to turn to face the officers and eventually the crowd came down, all encouraging officers to take a knee in support of their cause. Some officers did, which brought cheers from the crowd and some going up to shake the officers' hands or offer a fist bump.

By this time, the crowd had grown to an estimated 1,000-plus.

"I have people who I consider my brothers and sisters who live in fear now," organizer Chantilly Watson said. "They fear for their lives daily - and I don't. So it's my job to fight for them as I do."

When asked what she thought of the crowd, Watson said, "I love to see black and white people coming together to support the cause of Black Lives Matter."

Watson and others organized the event as a march from the Capitol to the Lincoln University quad.

Watson said they needed to stay on the sidewalks because they didn't have a parade permit, but that didn't stop the majority of the crowd from forming in the middle of High Street and marching east toward the LU campus, yelling chants. Some vehicles followed along with the group honking horns.

Some businesses along High Street had put up protection in their store windows and others hadn't. Some business owners stood in front of their businesses, holding signs of support.

The group of protesters turned onto Lafayette Street, eventually making their way to the corner of Lafayette and East Dunklin streets, where they gathered in and around the parking lot of Yvonne Walker Hoard Tennis Courts.

Most people lay face down in the parking lot and street as an act of protest. The gathering was peaceful and energetic.

People in the crowd and protest leaders called on people to vote, to record law enforcement activities and hold police accountable, and for the white community to listen to the black community.

"People respected authorities when they got to Dunklin and Lafayette streets and stayed that way throughout the event," Hill said. "There were no injuries or arrests."

After the gathering, Jon Freeland, of Jefferson City, said it was important for him to be there to amplify the voices of his black friends and community - his responsibility, especially as a white man.

Judy Hargrove, 70, of Jefferson City, said the same problems have been occurring since she was a young girl, and it's upsetting to her that nothing has changed in all those years - including since she was 13, when she made it on the cheerleading team at Simonsen as the first black person to do so, but was denied the opportunity.

Fremon Young, a 2010 graduate of Lincoln University, reflected on his first protest.

Young said he had been harassed by law enforcement in the area before, and nothing ever gets done to resolve the issue.

"Something has to be done soon, or it's going to get worse," he said.

Some protesters returned to the Capitol after the march ended. Jefferson City police reported some in the crowd threw water bottles, but there were no reports of injuries.

As of 9:30 p.m., there were three reports of property damage - broken windows at some High Street businesses, police reported.