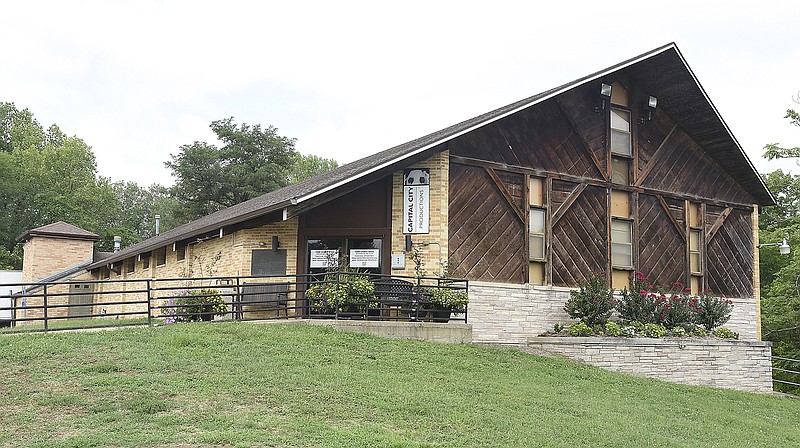 Although Catholic Charities of Central and Northern Missouri closed Jan. 10 on the purchase of Shikles Auditorium, activity at the 1200 Linden Drive site has not been obvious.

A $200,000 donation from the St. Mary's Hospital Foundation to the nonprofit may help move changes along a little more rapidly.

"We're narrowing down our concepts pretty quickly. We're still a ways a way from doing much. We're really excited," he said.

The Jefferson City Housing Authority announced in August the nonprofit - a social services agency that provides a range of programs and services to those in need in 38 counties regardless of faith, culture or situation - would be buying the property. The property had been leased to Jefferson City Parks, Recreation and Forestry Department, which in turn leased it to local dinner theater group Capital City Productions. However, the authority determined the property was not helping fulfill its missions of providing housing or fighting blight.

However, the facility's location in the midst of low-income housing makes it an ideal location for a hub, where the nonprofit could provide services.

The foundation donation, which is to be presented today to Bishop W. Shawn McKnight of the Diocese of Jefferson City, will pay for the purchase of the structure.

The community includes a number of low-income apartment units.

"The Housing Authority grew up around that space," Lester said. "We knew that was a neighborhood that would benefit from the services Catholic Charities could provide."

And, the site offered an opportunity for Catholic Charities and the St. Mary's Hospital Foundation to create a partnership. The foundation agreed to pay for the building if Catholic Charities' proposal to the Housing Authority were accepted.

Foundation Director Bev Stafford said the center fits with lessons learned during community health assessments. The Affordable Care Act (ObamaCare) requires the assessments every three years. As the assessments have been conducted, it became clear access to health care and programs aimed at disrupting substance abuse were priorities.

Also among challenges were a lack of access to transportation and life skills education, Stafford said.

"What we did further on our end, as part of St. Mary's Hospital and SSM Health (the St. Louis-based owner of the hospital) - was ask how we take our limited resources and make a greater impact on our health improvements," Stafford said. "Where might there be areas of opportunities? That is a particular area of need, in that neighborhood. There is Housing Authority. There are seniors. There are economic challenges - right in the center of the city."

And, all of that is relatively close to the hospital.

"It does a lot of things for us. It keeps us focused on where we can make the greatest impact," Stafford said. "It is something that we are very proud of - helping establish a community-based access point within the neighborhood that has these social needs."

The site will have four "universal use rooms," Lester said - "those really flexible exam-type rooms that different health care providers can utilize."

Part of the agreement with St. Mary's Hospital Foundation in funding the purchase is to provide an ongoing connection between Catholic Charities and Catholic health providers, he said.

Providers aren't going to be limited to all Catholics, McKnight said. He said last week a goal of the center will be to get multiple faiths involved in providing services to people in the community.

"If you look across the country right now, there's a real push to find ways to collaborate," Lester said.

Plans for the site include installing a kitchen, to show people how to cook healthy meals but also to set up a permanent food pantry. Currently, the Food Pantry for Central Missouri and Northeast Missouri sends a mobile food pantry to Little Explorers Discovery Center (about a block away) the first Saturday of every month.

The food pantry has been working with Catholic Charities to plan to establish a more permanent food pantry.

"If we get a more permanent pantry space established there, that gets the mobile units freed up to expand their range. They may reach even more people in need," Lester said. "It's a win-win for everybody."

The pantry could be a great way to get people in the door. Once inside, community members should find resources beside the pantry they can benefit from, Lester continued.

Folks who come in may receive flu shots, housing counseling or referrals for other services.

"We want to make Jefferson City a great community to live in for everybody," he said.

The foundation sees the site as an opportunity to extend the hospital's mission and outreach - and to address community health improvement needs outside its walls. It was a unanimous decision among foundation board members to support the center's purchase, Stafford said.

"It was an easy vision to embrace," Stafford said.

The center fits with the goal of the hospital's work - to improve community health by working inside and outside the hospital.

One of the things Lester said he's really looking forward to as he and collaborators design the space is making sure it could function as a hub for first responders during disasters, like the May 22 tornado and last summer's flooding.

Catholic Charities is the agency providing case management for long-term recovery after the twin disasters. The organization continues to connect disaster victims with resources and services.

"Heaven forbid we experience another disaster event in our area," Lester said. "We want this space to be a place where folks can get food, find temporary shelter or find a centralized space. We'll have that in mind. That's one of the things we learned from this disaster experience - just about any service that we provide and implement, in the back of our minds, we've got that disaster piece in mind."

The charity considers how the site will apply for the next disaster or how the health rooms may be used.

"If people need to get medical checkups, this is a place they can come," Lester said. "We're going to be good neighbors."