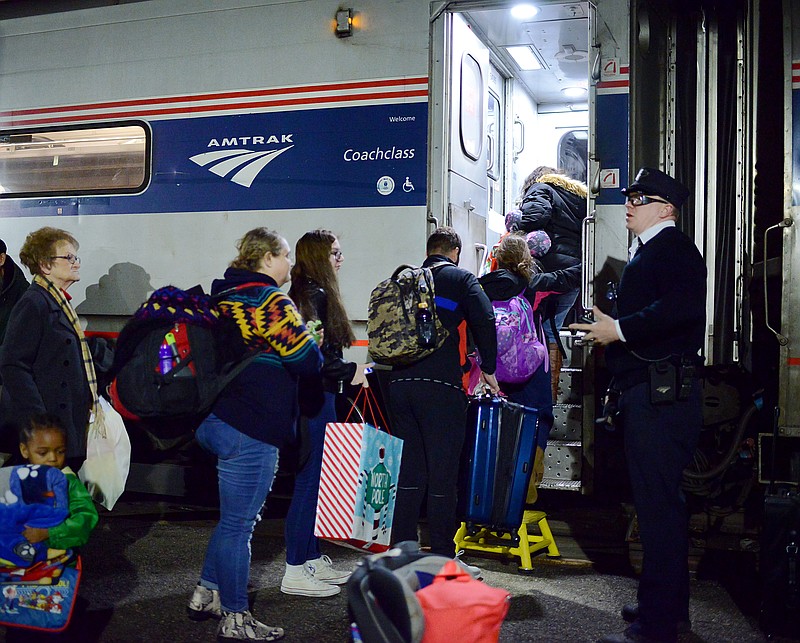 Passengers form a line Thursday, Dec. 26, 2019, as they board their train to St. Louis at the Amtrak station.

For the last decade, Missouri hasn't paid its full contract for the Amtrak River Runner service, leaving the state with several million dollars in overdue bills.

Missouri Department of Transportation Director Patrick McKenna said in a House Budget Committee hearing on Thursday that the situation was an "embarrassment" that will eventually put the passenger rail service in jeopardy.

Amtrak operates the Missouri River Runner passenger line under contract with the state. Amtrak trains on the Missouri River Runner line make two daily round trips between St. Louis and Kansas City, with eight stops in between the two hubs, which also connect to Amtrack's national routes. Since 2010, the Legislature has appropriated less than the cost of the contract, McKenna said.

Now, the state owes Amtrak $6.5 million in unpaid bills, plus the $11.65 million contract to run the service this year. And Amtrak, under directions from Congress to try to break even or turn a profit, started charging 12 percent interest on the state's arrears last year, McKenna said.

MoDOT has convinced the Legislature to appropriate $9.1 million to pay the contract since 2017, and it asked for the same core funding this year. In that time, the contract has risen along with operating costs and inflation from $10.6 million in 2017 to $12 million next year.

Since the funding hasn't matched the contract, MoDOT's payments first go to their unpaid debt, McKenna said. The remainder goes toward the contract, which was only enough to cover three months of service this year, putting the state back into debt to cover the rest of the year.

MoDOT asked for an additional $12.2 million on top of the core funding for Amtrak to pay off its overdue debt and cover the gaps in 2020 and 2021, McKenna said. So far, Amtrak has been very patient working with MoDOT. They haven't threatened to stop service, but, McKenna said in an interview, he believes they would at some point if the bill remains unpaid.

"You generally don't continue to get services you don't pay for," he said.

Another bill hangs over the state if it gets to that point. The Legislature agreed in 2014 to take $50 million from the federal government to make improvements to stations along the Missouri River Runner line, McKenna said. In exchange for the funding, the state agreed to keep the line operating for 20 years. If the state defunded and shut down the service this year, the state would have to pay back a prorated $36 million, McKenna said.

Lawmakers on the budget committee were somewhat divided on the situation. Representatives from areas directly served by the line emphasized its economic benefit, while a southwest Missouri representative questioned why the state set aside general revenue dollars for the service.

Rep. Aaron Griesheimer, R-Washington, and Rep. Deb Lavender, D-Kirkwood, both come from towns with River Runner stops, and both emphasized how important the line is for tourism in the area. Lavender said there's an entire cottage industry built around people going from Kirkwood to Washington and Hermann to drink wine and taking the train back.

Jefferson City has the fourth-most traffic of Missouri's stations, behind Kirkwood and far behind Kansas City and St. Louis, according to Amtrak.

Griesheimer said his constituents have a passion for the service, and he hoped the Legislature would allocate additional funds to pay off the arrears. He said it was "almost an embarrassment" the issue had gotten to this point.

"It actually is an embarrassment, not almost," McKenna said. "We have to deal with these folks at the federal level. We're not paying our bill."

Rep. Dirk Deaton, R-Noel, questioned if the state should keep funding the service and said there should be a serious discussion about it. The $9 million-$20 million Amtrak funding is a relatively small portion of MoDOT's $3.66 billion budget, but it's funded by the state's general revenue, while the vast majority of MoDOT's functions are funded by dedicated user fees, fuel taxes and federal funds.

That means the state pays for Amtrak with the same money it uses to pay for schools, and in the case of last session, roads and bridges, Deaton said in an interview. Budgeting is setting priorities, and Deaton questioned if Amtrak should be as high a priority to the state. That's especially true as the Legislature is taking on $300 million in debt in the form of bonds to fund bridge repairs, which are a critical need, he said.

The state's per-rider cost of operating the service has increased from $48 in 2014 to $53 this year. It would be $124 next year under MoDOT's plan to pay off all its arrears in one year and $70 if the state paid its full contract. Tickets from Kansas City to St. Louis run from $36-$87, so the state is paying more for each ride than many passengers, Deaton said.

The state clearly subsidizes the service, and that's a central issue for many lawmakers in considering if the service is worth funding, McKenna said. Amtrak sets the ticket prices, and MoDOT has input on that. They've raised the fares in recent years but try to balance making as much money per ride as possible while not pricing out so many people the service becomes less useful, McKenna said.

Deaton recognized it serves several communities, and it clearly has their support. Instead of the state bearing the full cost of its contract, maybe those communities should look at taking some of that on, he said.