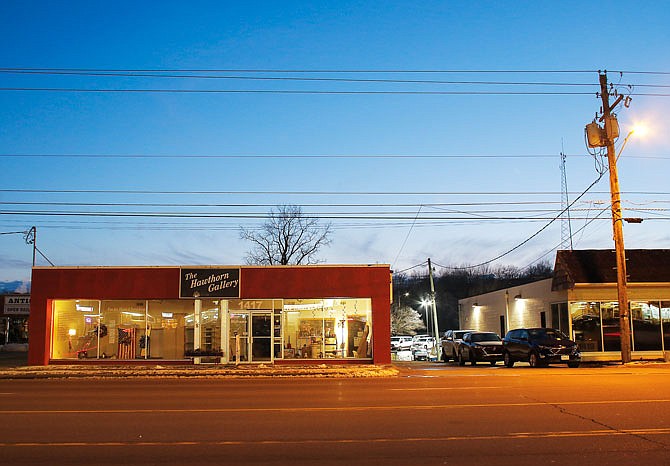 Two sites in the 1400 block of Missouri Boulevard will house Cole County's only medical marijuana dispensaries. One is in Jefferson Plaza, 1406 Missouri Blvd., and the other, seen here, is at 1417 Missouri Blvd., the former Hawthorn Gallery building.

Two sites in the 1400 block of Missouri Boulevard will house Cole County's only medical marijuana dispensaries.

The Missouri Department of Health and Senior Services (DHSS) on Friday finished notifying applicants whether they had been approved for - or denied - the dispensary licenses.

Missouri Health and Wellness LLC, which received multiple licenses, will operate in the Capital City out of Jefferson Plaza, at 1406 Missouri Blvd. It will also operate dispensaries in Sedalia, Belton, Kirksville and Washington.

The other Jefferson City dispensary is to be across the street at 1417 Missouri Blvd., where the SK Home Store now stands.

Having a freestanding structure simplifies opening a dispensary at the location, said Nevil Patel, one of the partners in Shangri-La Jefferson City, the applicant for the site.

Shangri-La received approval for all five of its dispensary applications - which also included two in Columbia, one in Cameron and one in Nevada.

"We should be opening around the end of May or early June," Patel said. "It depends on cultivators."

Dispensaries are required by Missouri's medical marijuana amendment to offer only Missouri-grown products. The DHSS section for medical marijuana regulation issued licenses for 60 cultivation facilities in December. It takes up to six to eight weeks to grow medical marijuana to maturity, but the products also have to be tested. And, cultivators have up to a year to begin producing.

But Shangri-La has already created relationships with cultivators, and is confident it will be able to open dispensaries soon, Patel said.

The Jefferson City location will need some work, possibly including expanded parking, Patel said. But that should come along quickly.

Patel, who has a background in retail, said the team he's involved with also includes professionals in health care (one is a Jefferson City physician), nursing and pharmacies.

"We have a team to get us of the ground," he said. "Nobody in our ownership is from out of state. We're very proud to be Missourians."

The amendment, which passed in November 2018, received 1,572,592 votes statewide (65.54 percent). It made marijuana use legal for treatment of cancer; epilepsy; glaucoma; intractable migraines (persistent migraines that don't respond to other treatments); chronic medical conditions that cause severe, persistent pain or persistent muscle spasms, including, but not limited to those associated with multiple sclerosis, seizures, Parkinson's disease and Tourette syndrome; debilitating psychiatric disorders (when diagnosed by a state licensed psychiatrist), including but not limited to post-traumatic disorder, human immunodeficiency virus or acquired dependence (if a physician determines cannabis would be effective and safer); any terminal illness; or (in the professional judgment of a physician) any other chronic debilitating medical condition.

DHSS awarded 192 licenses for medical marijuana dispensaries - 24 in each of the eight congressional districts in Missouri.

The intention is that dispensaries will be nearby and available for people suffering from severe medical conditions. However, of the 114 counties (and the independent city of St. Louis) in the state, 36 rural counties lacked any applications for dispensaries. The dearth of dispensaries is most prominent in blocks of the north-central and south-central areas of the state.

A map on mogreenway.com (a Missouri cannabis industry publication) shows the blind application process did well in spreading the dispensaries within the districts, said Lyndall Fraker, director of the DHSS section for medical marijuana.

"It tells the story," he said. "There are 46 in Kansas City, 50 in St. Louis. If you follow the population, that's probably a little light."

Places with larger communities ended up with the most dispensaries.

There appear to be gaps in the Mark Twain National Forest and northwest of Columbia, but populations in those areas are sparse.

"We've had some really good comments (about the results)," he said. "There is an assortment of good businesses - including some mom-and-pops."

In Eldon, Heya Eldon Retail LLC received a license for a dispensary at 1812 U.S. 54. The dispensary license is one of 11 the company received approval on, according to CEO Steven Meyer.

"We're a home-grown Missouri team. We think it's a great location," Meyer said. And, with its location near U.S. 54, "It has potential to drive in a lot of patients."

Having multiple licenses makes Heya "fully vertical," he said. In addition to licenses for several dispensaries, the organization has licenses for cultivation and three manufacturing facilities.

The site in Eldon is in a building that will require some renovations. So, it may take time to open. The industry is very competitive right now, Meyer said. All the recipients of licenses are watching each other to see how rapidly others are moving.

There is rapid growth in the number of residents receiving medical marijuana licenses, and each of the competitors hopes to be first in the market.

The industry is going to blossom rapidly, he said.

"I've been saying for some time - watch to see what happens," Meyer said.

More than 31,000 Missouri patients have applied for medical marijuana cards. Of those 29,457 had been approved.

The section for medical marijuana continues to process about 1,000 applications each week, Fraker said.

More information about the program is available on the DHSS website.