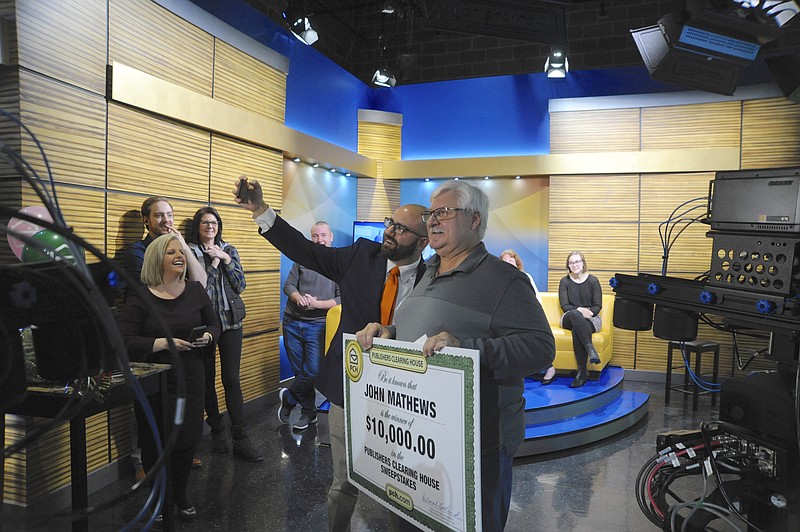 Before the big reveal, PCH Prize Patrol member Matt Kelly met with invited media at River City Florist in downtown Jefferson City to collect a bouquet of roses and fill up a rainbow of PCH balloons for the winner.

When he revealed the winner's name and address to the reporters, KRCG-TV's reporter Gracee Mattiace recognized the name of the Holts Summit resident.

After some research and calls back to the station to double-check, Mattiace's suspicions were confirmed - the winner of the $10,000 check from Publishers Clearing House was John Mathews, the station's chief engineer.

The plan was quickly changed. Instead of showing up unannounced at Mathews' home, the PCH Prize Patrol would surprise him at work. Mattiace set it up for a meeting to be called in the station's studio, making sure the real reason for the meeting was kept secret from everyone else - especially Mathews.

After the staff was gathered, scattered around the studio and wondering what they'd all been called for, the door opened and in walked Kelly - big check, flowers and balloons in hand.

"Excuse me, is there a John Mathews here?" he called into the room.

Mathews stood from his seat and identified himself.

Mathews was surprised, along with the rest of his co-workers. Kelly asked him how he felt about winning.

Mathews, who has worked for the station for almost 41 years, said he likely enters every day. He started back in May 2018 when he was off work for medical reasons.

"I didn't think it would really happen," Mathews admitted. "I thought, 'Boy, it would be nice.' So I just kept entering."

Mathews had an idea of what he'd use the money for.

Mathews also said a portion will be donated to his church. When asked what he might buy his wife, Mathews said, "Whatever she wants."

Since PCH started doing giveaways in 1967, the company has awarded more than $456 million in prizes, according to its website. Contestants enter by filling out forms or playing online games.

"Is it OK if I keep entering?" Mathews asked Kelly after he received his check.