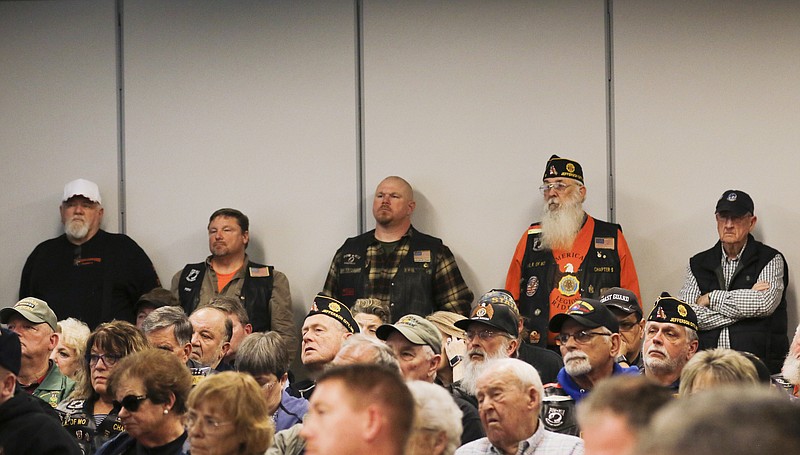 Supporters of the relocation of East Miller Park stand in the back of the room during presentations Tuesday at the Jefferson City Parks, Recreation and Forestry Department's meeting at The Linc. The room was so full during this portion of the meeting that several audience members had to stand in the back.

On one side of a room, a large group of veterans - easy to spot wearing hats and vests adorned with decorations of their service - take up rows of seating and some standing room in the back.

Nearby, a cluster of people stand with a cardboard sign reading "Don't move our park."

On the other side of the room, Jefferson City Parks and Recreation Commission members sit, waiting to hear from both sides about a controversial proposed relocation of East Miller Park to expand the veteran's cemetery.

Only one member of each group will speak during Tuesday night's commission meeting, but their presence speaks volumes in support of their causes.

The Jefferson City National Cemetery is out of space for burials.

The veteran's cemetery, at 1024 E. McCarty St., sits on 2 acres next to Woodland Old City Cemetery and across East Miller Street from East Miller Park.

Burials at Jefferson City National Cemetery began in 1861, and it was officially designated as a national cemetery in 1867 following the end of the Civil War. At the time, approximately 350 interments had been completed.

In 1996, the cemetery ran out of sites for cremated remains.

The cemetery now has 1,792 white granite headstones and is closed to new interments. The only interments accepted now are subsequent ones for veterans or eligible family members at existing grave sites.

The proposed solution involves relocating East Miller Park and expanding the cemetery into the current park space. East Miller Park would move to the other side of U.S. 50, which runs alongside the park.

A green space on the other side - along East Elm Street, roughly between Clark Avenue and Chestnut Street - is currently vacant and owned by the city. This is the proposed site of the relocated park.

It's a space of about 0.75 acres compared to the current 2.5 of East Miller Park.

During Tuesday's meeting, Parks Department staff gave a short presentation focused on East Miller Park's possible relocation. As part of their examination of the park, staff used ParkServe Interactive mapping made by The Trust for Public Land to calculate service areas.

A service area for a park is the population living within a half mile, or 10-minute walk, of the park. For East Miller, the service area includes a population of 1,840. The proposed new location on East Elm Street would have a service area of 1,540.

However, numbers aren't everything. Parks, Recreation and Forestry Department Director Todd Spalding said it's about the people.

"We want to make sure the priority is the parks user," Spalding said. "The veterans cemetery expansion is an honorary initiative, and while we consider their request as a staff, it's also absolutely imperative that all area residents affected by the potential change are provided with a better park experience than before."

Hans Overton, a Jefferson City resident who has lived in the area for more than 30 years, has been the most vocal opponent of the relocation of what the community calls "the Black Top."

For him, its about preserving a community, not disrespecting the veterans.

Starting in the beginning of December, Overton started protesting the move outside city hall - a lone figure with a cardboard sign reading "Don't move our park" and a cellphone set to live-stream on Facebook.

While Overton may be the face of the opposition, others are vocal online. Overton created a petition titled "Save the Black Top/East Miller Street Park" through the platform change.org. As of Tuesday, it had gathered 632 signatures. His Facebook live-streams and posts about the park also frequently collect positive comments.

During his presentation to the commission, a young man stood to his side holding that cardboard sign.

For Overton, it's about more than parks proximity to the neighborhood or the available playground equipment.

"Some have stated they are building another park," Overton said. "It's not about another park. It's about the Black Top."

Relocating the park to East Elm Street isn't an agreeable option for Overton, who objected to the park being placed behind the large wall that exists along the highway there.

"This wall makes these people invisible to the rest of Jefferson City," Overton said, referring to the low-income housing near the proposed park location. "I do not have a problem with low-income housing. My problem is that society has stated that these areas are not conducive for certain people to visit or live in."

Overton proposed, if the park must move, relocating it to the historic Foot district near Lincoln University, which housed a thriving business district for the African American community until the 1960s.

"The community request that our history remain intact by allowing the Black Top to remain where it is," Overton said. "If it should die, allow it to be reborn on the land of the ancestors, and not behind a wall that will cast those who will visit it as untouchables.

"It's not about disrespect to the military. It's about perseverance - preservation of a space."

Representing the large group of veterans who turned out to the meeting, Don Hentges, president of the Jefferson City Veteran's Council, spoke in favor of the cemetery expansion.

"All of our members have stated to us and the organizations for years that we need to have a place in Jefferson City to bury our veterans," Hentges said.

There are several state cemeteries, the closest being in Fort Leonard Wood, which are open for burials, but they are upwards of 60 miles from Jefferson City.

The veterans want to be closer to home.

The veterans group wants to see the cemetery expand, but Hentges said he understands the value of parks.

"I know parks are important, and we need parks," Hentges said. "But our soldiers walked a long way to defend this country, so I think the people in Jeff City can walk a few more steps to a park."

Regardless if the park moves or not, East Miller Park is set to be upgraded within the coming years as part of the master plan the department rolled out in 2018. East Miller was listed as a top priority to receive an update.

In November, the Jefferson City Council approved a bond, not to exceed $7.5 million, for parks improvements through that master plan.

"There's not a lot going on in that park and this would be a great opportunity to make things better there," Spalding said.

The master plan suggested a large play structure themed around firefighters and other first responders - a reference to the nearby fire station and museum - as well as meeting plazas, a new trail, basketball court and shelters. Estimated costs were $2.5 million-$3 million.

No decision has been made by the parks commission on the issue. On Tuesday, Commission President Chris Leuckel said they would table the discussion until the next meeting due to a few commission members being absent.

Spalding said once the decision is made, they won't be involved for a while, as the veteran's groups seek the approval and funding of the U.S. Department of Veterans Affairs, which regulates national veterans' cemeteries.