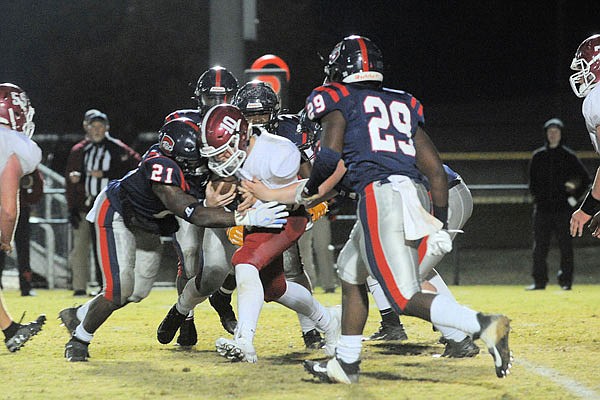 Central of Clay County High School's J.D. McNealey (21) helps to bring down a player from Sardis High School during a Nov. 8, 2019, game in Lineville, Ala.

LINEVILLE, Ala. (AP) - Fans are encouraged to come on the field before the football games at Central High School of Clay County and form two lines, creating a path from the back of the end zone toward midfield.

From there, the Volunteers make a grand entrance, bursting through a red and blue banner that is wider than the goal posts and taller than the crossbar. A puff of smoke is added for effect as the band plays "Battle Hymn of the Republic."

The team has helped bond two communities that were once fierce rivals, then reluctant partners and now proud supporters of a two-time Class 5A state champion. It has taken the better part of a decade to get used to.

"A lot of folks, the only time they're on this campus is at a football game," said Tommie Wood, the public address announcer for Clay Central's football games, on a chilly November night as he prepared for the Volunteers' first playoff game. "Whether you're from Lineville or you're from Ashland, and you came right here and had an opportunity to sit by folks who you never sat with at a game before.

"I think that is the one common thread that has really bound this together. To me, that's kind of the thing that's solidified this entire merger."

Small-town football is thriving in this east Alabama county, population 14,000 and home to Mount Cheaha, the highest point in the state. While overall participation in high school football has been on the decline in the U.S., the trend has not been as dramatic in the Deep South and Alabama seems to have bucked the trend altogether.

Alabama is also producing more major college football players than ever before.

Clay Central has been a modest contributor: There were three scholarship players on FBS rosters this season who went to Clay Central, including North Carolina defensive back D.J. Ford.

It wasn't that long ago the football tradition around here seemed to be in danger. In 2012, Clay County High School in Ashland and Lineville High School in the neighboring town were merged in brand new buildings.

Pooled resources and upgraded facilities were touted as benefits, but the trepidation was real. The Clay County-Lineville rivalry, after all, had come to define the towns and their residents.

"You'll hear people say it was the worst thing that ever happened," said Jeff Colburn, who for years was a local radio announcer, calling games for both schools.

The football games epitomized the rivalry, but it ran even deeper.

"It wasn't just a school rivalry on Friday night," said Kris Herron, who was head coach at Clay Central from 2013-17. "It was city councilors, competed for businesses. The schools compete in everything. Athletics, academics. Whose valedictorian had the highest GPA. I mean, it was a century of it."

Herron said no one was cut, but players who had been starting and played a lot when each school had about 40 players became reserves on the larger squad. That led to hard feelings among parents and residents.

For years, there would be groups of fans still wearing the blue and white of Clay County and others sporting Lineville's red and black (the merged school's colors are officially red, white and blue, because who can argue with that?).

Fortunately, the team was good, a consistent winner and playoff team. That helped ease fears the program would sink.

Herron, promoted to head coach after the first season when Giddens retired, kept the job until after the 2017 season, when he decided to step down. Danny Horn, who had coached Clay County through its most successful period in the 1990s, was lured back to his old community.

Horn was revered in his native Ashland. He led Clay County to six state championships, including a record 55-game winning streak.

"When Danny Horn came back to here, there were a lot of folks mad from Lineville because he had beat 'em," said Josh Nelson, a Clay County man who has been video recording the football games for coaches since 1990.

Still, there is nothing like a championship to get everybody on board. Horn's team delivered last season and did it again this season in a last-play thriller behind a senior class that currently has no FBS offers but plenty of confidence that comes with suiting up for program that is the pride of two towns.

"You know, football down in the South is a little bit more important," Horn said. "And especially, you got small communities, really that's their lifeblood."