Missouri lawmakers confirm up to 60,000 children wrongfully removed from Medicaid 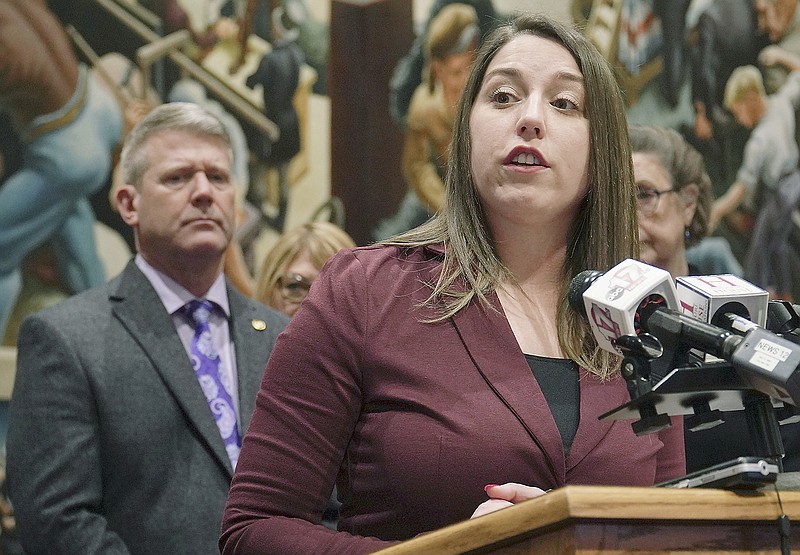 Crystal Quade, D-Springfield, House Minority Leader, and several other members of the House Minority Caucus held a news conference Monday in the House Lounge to publicly raise the alarm about the Medicaid enrollment crisis. According to the caucus, an estimated 100,000 Missouri children have recently lost access to coverage, but House Democrats said they are encouraged by recent movement by Republicans to address the problem.

Missouri's Republican leadership is coming around to verifying what Democrats have been saying for more than a year - the state wrongly kicked thousands of children who qualify for Medicaid out of the program.

About 125,000 children were removed from the state's Medicaid rolls over the past year, state Rep. Crystal Quade, D-Springfield, the House minority leader said Monday.

"In recent weeks, Republican leaders have finally admitted we have children without Medicaid who should have it," Quade said. "We appreciate the public acknowledgment of this crisis being real."

Every Missouri child wrongfully removed from Medicaid should have the insurance program restored, she said.

Leading up into last year, about 30,000 adults who didn't qualify for MO HealthNet, Missouri's Medicaid program, were added to the program, said state Rep. David Wood, R-Versailles, vice-chairman of the House Budget Committee.

Wood, who is also chairman of the House Subcommittee on Appropriations - Health, Mental Health and Social Services, said when a new system went into place in 2018, the wrongfully added adults' families lost coverage because the parents didn't qualify in the first place.

However, because Mo HealthNet for Kids provides medical care for children younger than 19 whose family makes up to 300 percent of the federal poverty level, the children still qualified. Parents just didn't know to reapply for the children.

"We probably didn't do as good a job as we could have to notify them to reapply for their children," Woods said. "We should probably do a better job of that."

Still, it's the parents' responsibility to find health coverage for their children, he said.

A challenge is that parents are required to re-enroll their children every three months.

"This will greatly reduce children going on and off the program," Quade said.

Every time eligibility is reviewed, there's a chance mistakes could be made, which results in a drop in coverage, according to Unsicker. Unsicker has introduced House Bill 1670, which would allow a child who is eligible for the state's Medicaid program to remain eligible for benefits for 12 months after enrollment, unless they move out of Missouri or turn 19.

"We believe many of the Medicaid drops in Missouri are because of mistakes," she said.

She added that a survey of health care providers found 87 percent of patients who lost coverage still qualified for coverage but lost it because of changes to the renewal process.

States that have year-long coverage "experience more efficiencies, less administrative burden and fewer gaps in coverage," Unsicker said, "which means the states save time and money."

And it means parents don't have to worry about whether their children's health is covered one month to the next, she said.

Democrats are asking that Gov. Mike Parson pause removal of children from the program until the situation is resolved. A previous Missouri governor did so, and so has the state of Louisiana, Quade said.

However, the governor's office has not budged, she said.

"We have a chance during the coming weeks to do right by Missouri's children - and I hope the Republican leadership will make this a priority," she said.