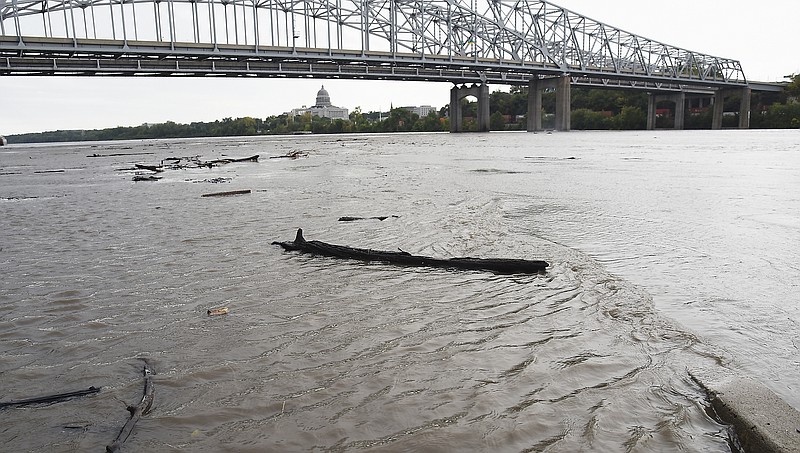 2018 FILE: A light rain began to fall on the swollen Missouri River in Jefferson City.

The U.S. Army Corps of Engineers has increased releases from the southern-most dam on the northern portion of the Missouri River in South Dakota in preparation for the upcoming season.

"All water from 2019 emptied from the system in late January," said John Remus, chief of the Corps' Missouri River Basin Water Management Division. "The higher-than-average winter releases from Gavins Point will allow us to maintain more flood storage for a longer period. This will provide flexibility to respond to runoff events downstream of Gavins Point while giving consideration to the ongoing levee rehabilitation construction efforts farther south.

"Conditions permitting, releases from all our northern dams will likely remain high during the remainder of winter," Remus added. "We will continue to monitor the basin conditions and will remain aggressive in our releases to the extent it is practicable."

New construction on many levees damaged by flooding in 2019 along the Missouri is expected to start within the next few weeks. However, the Corps estimated it will take two years to restore all those levee systems, more than 100, to their conditions prior to the floods. The cost could be around $1 billion.

Corps officials do not expect these levees to be repaired prior to this spring.

Not only were they overtopped, but the levees also suffered breaches and deep scour holes, which are areas where water has eroded bed material underwater along a levee.

Levees can be built back to their pre-flood conditions, according to current rules the Corps follows. The cost to repair is shared between the federal government and the local levee sponsor. The federal share is 80 percent, and the non-federal share is 20 percent of the actual construction costs.

In addition to the 20 percent cost-share, the local sponsor is responsible for providing without cost to the federal government, all lands, easements and rights-of-way necessary to complete the repairs.

The Missouri River at Jefferson City was starting to slowly drop Thursday afternoon from a crest of 16 feet Wednesday. The river rose 4 feet, starting at 12 feet Saturday. The river was expected to slowly fall to around 13 feet by Tuesday.