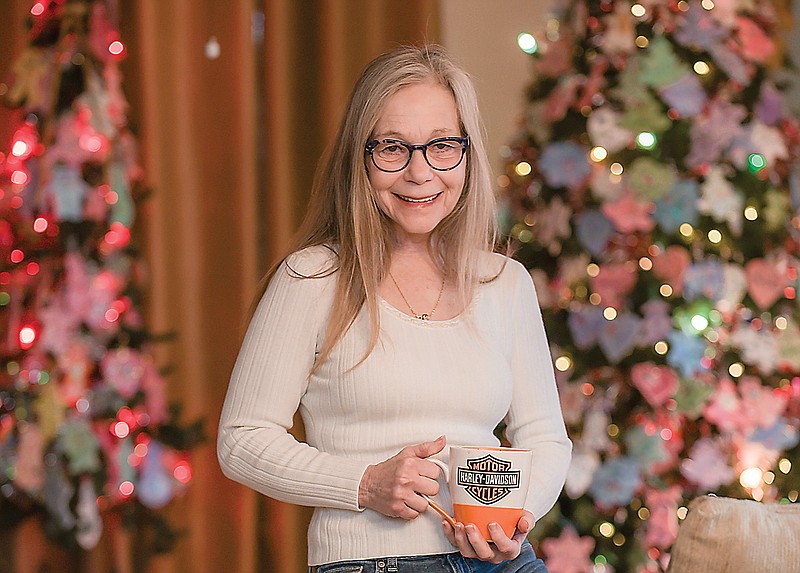 Marianne Asher Chapman poses in front of Missouri Missing's Christmas Trees of Hope containing cookie ornaments with the names of missing and recovered individuals. Chapman, who lives in Holts Summit, co-founded Missouri Missing after her daughter, Angie Yarnell, went missing, and she now advocates on behalf of the missing and their family and provides resources to aid in the search for them.

Missouri Missing, a nonprofit charitable organization, has helped and comforted thousands of Missouri families searching for their missing loved ones since it started in 2007.

Its board of directors has undergone many iterations over the years, but through it all, Marianne Asher-Chapman has been the stabilizing force that has kept it going.

Asher-Chapman's daughter, Angie Yarnell, disappeared in 2003. Asher-Chapman made flyers, rented billboards and did everything she could to spread the word about the case. That persuaded her and another woman to start the missing persons advocacy group in 2007 to help families in their searches and to memorialize those who were never able to return to loved ones.

Yarnell is still missing, although Yarnell's husband at the time, Michael Yarnell, admitted to causing his wife's death and served four years in prison. He was released in 2013.

Despite a promise Asher-Chapman said Michael Yarnell made to lead authorities to Angie's remains, the time authorities spent searching for her body, and the countless hours Asher-Chapman has spent digging, looking and searching, Angie Yarnell's remains have never been found.

While Asher-Chapman continues to seek answers in her daughter's case, she works to help others like her.

During each of the past seven years, the Missouri Missing has operated Christmas Trees of Love and Hope. Asher-Chapman takes the names of people who are missing or deceased and writes them on a "cookie" ornament, which she then places on her living room Christmas tree.

She uses ornaments as a way to remember people because it meant so much to her when her own son and daughter made ornaments for her at school in 1980.

"They are really truly my material life's most prized possessions," she said.

The ornaments are handmade; they look like sugar cookies but don't contain sugar. She then bakes and decorates them.

"They're not great works of art, but they're labors of love," she said.

The program has grown each year and now contains more than 200 names. Last year, she started a second tree to fit them all.

She has requests from across the nation to honor people. It's time-consuming, but she's glad to fill each one.

The trees contain mostly names of missing people, but some people use the program to honor loved ones who have died.

She acknowledges the tree program is a lot of work but says it's also a labor of love.

With the cooperation of families and law enforcement, the 501c3 organization creates flyers about missing persons, shares information on social media, even helps with searches.

It also attends various events, displaying a large poster with thumbnail photos of missing persons in Missouri. Often when people approach their booth, the first thing they do is look at the photos for their missing loved one.

"It sort of makes you feel good, even though it's sort of a sad thing. It's a feeling of hope," Asher-Chapman said.

It's that sense of hope that drives her work with Missouri Missing, as well as personally.

She continues to seek resolution for herself and others with missing loved ones. And each year, she continues to buy a present for her daughter at Christmas and on her birthday, May 20. She always will.