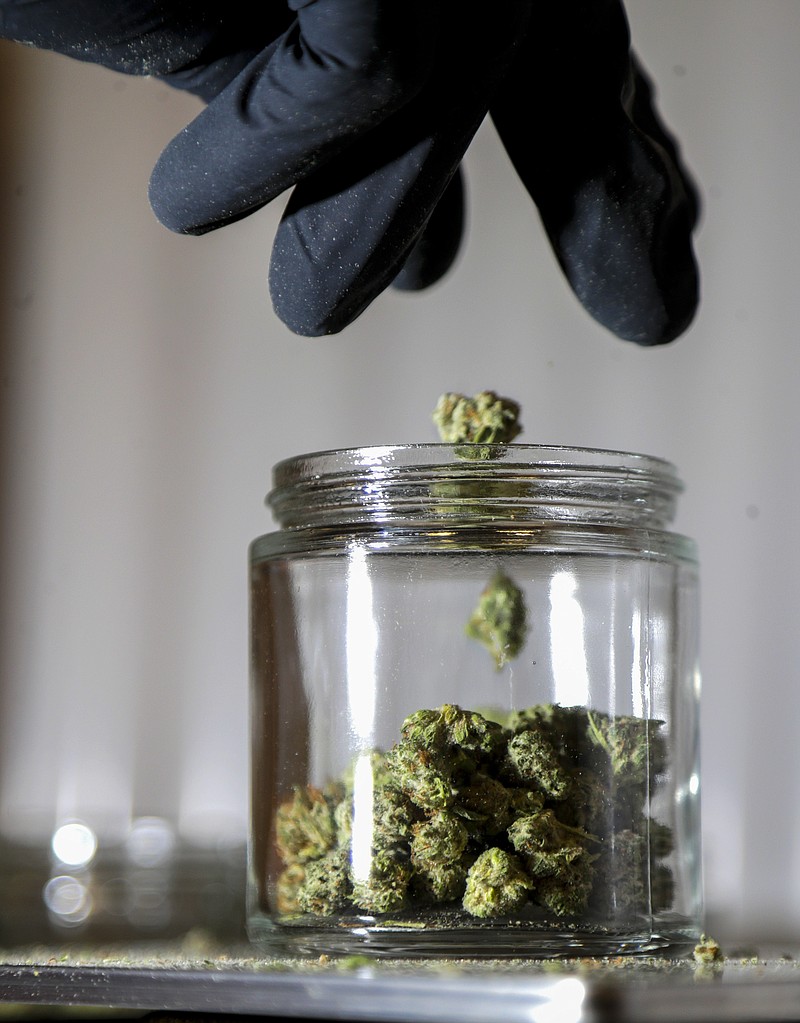 FILE - In this March 22, 2019 file photo, shows marijuana buds being sorted into a prescription jar at Compassionate Care Foundation's medical marijuana dispensary in Egg Harbor Township, N.J. Voters in four states could embrace broad legal marijuana sales on Election Day, setting the stage for a watershed year for the industry that could snowball into neighboring states as well as reshape policy on Capitol Hill. The Nov. 3, 2020, contests will take place in markedly different regions of the country, New Jersey, Arizona, South Dakota and Montana and approval of the proposals would highlight how public acceptance of cannabis is cutting across geography, demographics and the nation's deep political divide. (AP Photo/Julio Cortez, File)

A federal lawsuit filed last week seeks to strike down a Missouri requirement that medical marijuana licenses go to businesses owned by residents of the state.

A constitutional amendment approved by voters in 2018 that legalized medical marijuana requires facilities to be "majority owned by natural persons who have been citizens of the state of Missouri for at least one year prior to the application."

Mark Toigo, a marijuana investor from Pennsylvania, is suing to overturn that requirement.

According to state records, Toigo is a minority owner in Organic Remedies MO Inc., which was awarded three dispensary licenses, one cultivation license, and one marijuana-infused product manufacturer license.

Toigo argues that by enforcing the residency requirement, the state is discriminating against non-residents and violating the dormant commerce clause of the U.S. Constitution.

He filed his lawsuit Friday against the Missouri Department of Health and Senior Services, as well as its director, Randall Williams, in the U.S. District Court for the Western District of Missouri.

"The real effect of the residency requirement has been and will continue to be to stifle Missouri's medical marijuana program by severely restricting the flow of investment into the state," the lawsuit says. This will mean that Missouri's medical marijuana businesses will not be able to access the capital necessary to build a vibrant, viable, and successful industry."

Toigo's lawsuit joins a spate of similar litigation around the country challenging similar restrictions on marijuana licenses. In Oklahoma, for example, a lawsuit filed earlier this year by a Washington-based company is challenging the state's two-year residency requirement.

In Maine, a federal judge threw out a similar residency requirement earlier this year.

It's little wonder, given how lucrative licenses to grow, sell and manufacture medical marijuana have become.

Toigo argues in his lawsuit that Missouri's medical marijuana market is expected to reach retail sales of $175 million to $275 million a year. But because of the residency rules he is prohibited from investing more money into any Missouri company if it increases his ownership stakes above 49 percent.

The St. Louis Post-Dispatch reported that as of Friday 17 medical marijuana dispensaries had opened in Missouri, along with 11 cultivation sites and one manufacturer of cannabis-infused products.

While businesses begin to come online, the rocky rollout of the medical marijuana program in Missouri continues to draw scrutiny.

A lawsuit in Cole County Circuit Court seeks to strike down a cap imposed by the state on the number of medical marijuana licenses awarded to businesses.

Meanwhile, more than 700 appeals of rejected licenses are still pending with the Administrative Hearing Commission.

And hovering in the background is an FBI inquiry that has involved at least one grand jury subpoena and a host of interviews with state lawmakers, lobbyists and those involved in the industry.