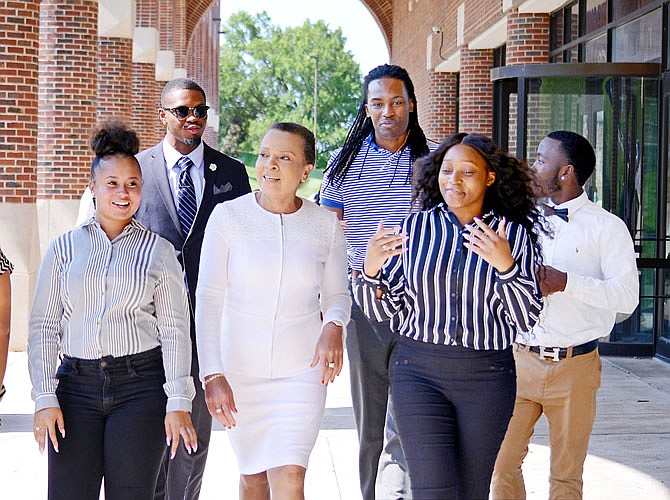 Jerald Jones Woolfolk said her time as president of Lincoln University has been a whirlwind.

Officially installed last October, but on the job since June 1, 2018, Woolfolk has been serving as the university's 20th president for just over a year.

Woolfolk's first year at LU ended in another kind of whirlwind when the President's House at 601 Jackson St. was hit by the May 22 tornado. The historic home, built in 1916, is currently uninhabitable, and because it's on the National Historic Registry and requires specific restoration, it will be some time before she can move back in.

Woolfolk survived the incident without a scratch and is looking to the future.

As LU began classes three weeks ago, she started her second year with the same goals for the university as she had a year ago - stabilizing enrollment and increasing student retention, graduation and fundraising efforts.

The goal is to stabilize enrollment - because, as even Woolfolk said, it's hard to change enrollment trends. However, she hopes the university will be able to fix another problem - student retention.

"That's what we are suffering with, is not being able to retain our first-year students," she said.

The reasons aren't certain, but Woolfolk has her theories: A high number of first-generation students and students in lower socioeconomic class, which are both risk factors for retention, as well as LU's open-enrollment system.

Some students may come to LU underprepared for what college requires and may be unsuccessful in the classroom.

For Woolfolk, one way to keep retention up is to be a hands-on administrator and encourage a "culture of caring" on campus.

"I'm a hands-on type of person. I like to touch my students and feel them and talk to them," she said. "I call it a 'culture of caring,' and I think that we need to have a more hands-on approach with students. We need to monitor, because we already know what the risk factors are when they come."

This means engaging with students and making sure solutions work for each student, as well as realizing not everyone comes to college with all the answers.

"When I talk about a culture of caring, I'm talking about as staff and administrators, we understand that, and we understand the students that we serve, and we go the extra mile to help them," Woolfolk said.

She'll go the extra mile, if needed, to make sure she's supporting students.

"If I have to hold your hand and walk you to the class, if that's what you need me to do, then that's what I'm going to do, and I encourage everybody to do that."

Woolfolk's hands-on approach is apparent when she walks around the LU campus. When greeting a group of students, including Student Body President Jordan Smith, she hugs students and greets many by name.

Smith said he felt good about Woolfolk when he met her last year.

"She just has a good spirit about her," Smith said. "I'm someone who's big on energy, and when I first met her, her energy was just good."

The two have worked on projects together, and Smith said he feels sure any projects they work on together this year will be successful.

Woolfolk's other goal is fundraising. Right now, the university is in the first stage of its fundraising campaign, which will go public in October.

A year into her time at LU, Woolfolk feels positive about what she's been able to do, even if some may not notice.

"I think that we made some progress in doing some things," she said. "Oftentimes, they're not things that you can see because they're infrastructure. We're building a stronger infrastructure, I believe, that will carry Lincoln over into the next century."

For the upcoming school year, Woolfolk is excited for the Lincoln University School of Nursing to celebrate its 50th anniversary in November, as well as an increased number of recruiters, including one who will focus on Jefferson City and the surrounding counties.

But what she's most excited for is student success.

"I've been working in higher education for about 37 years, and what excites me is student success - seeing students come in at one level and watching them grow to another level," Woolfolk said. "To be in this space and to be able to motivate students and faculty and staff, and to see people get excited about the work we do, that excites me."