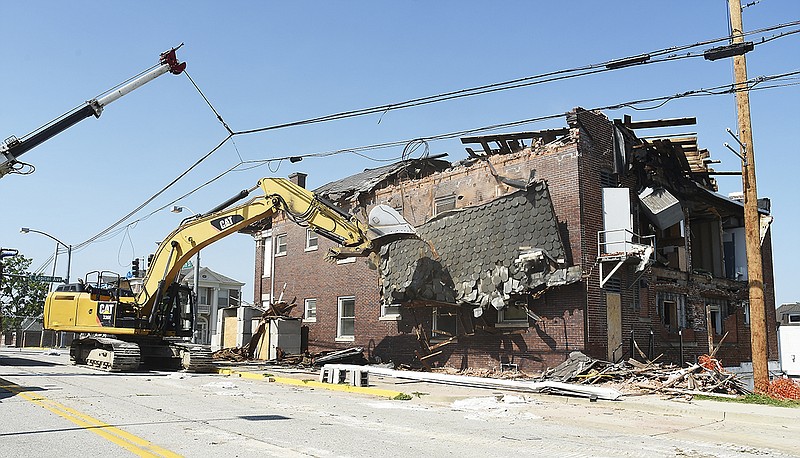 Avenue HQ co-owners Holly Stitt and Quinten Rice fought back tears Wednesday afternoon as they watched their years of hard work and dedication come crashing down.

Early Wednesday afternoon, Twehous Excavating Company was in the process of demolishing 623 E. Capitol Ave., where the Avenue HQ offices were located.

The company then planned to demolish 621 E. Capitol Ave., which previously housed the Avenue HQ venue.

"I never thought I would be standing here watching my building come down, especially when I purchased it years ago," Stitt said. "Even after the tornado, I was hopeful I would be able to save it, and here I am watching it go down. It's very surreal."

The buildings at 621 and 623 E. Capitol Ave. were deemed structurally unsafe due to the EF-3 tornado that struck Jefferson City May 22 and subsequent rain.

The tornado destroyed the second story of 623 E. Capitol Ave., and portions of the roof were collapsing. Last month Stitt put up a barrier along the side of the building facing Lafayette Street due to the roof shifting.

"It's the giant reset button that I never expected to happen, but it all happens for a reason and we'll get it figured out and keep moving on," Rice said, pausing to watch a large chunk of the wall crash to the ground and create a cloud of smoke.

She and Rice plan to rebuild 623 E. Capitol Ave. and return it to its original glory.

"I think it's kind of a mission and a goal to help and be a positive part of this area again," Rice said.

They salvaged several architectural features from 623 E. Capitol Ave., and Twehous Excavating even helped with the salvaging, giving Stitt several corbels they saved while demolishing the building.

Stitt said she is not sure when she will start rebuilding.

"No matter what the future holds, this is still my corner and this is where I feel like home," Stitt said.

As other East Capitol Avenue property owners work to repair their tornado-damaged homes, Jefferson City residents are waiting to see what other historic properties will come down. Property owner Frank Burkhead previously told the News Tribune he plans to demolish the Dallmeyer House at 600 E. Capitol Ave. 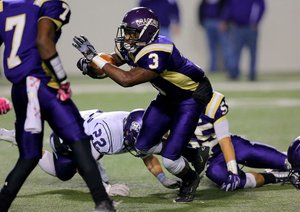 Photo by Stephen B. Thornton
12/13/14 Arkansas Democrat-Gazette/STEPHEN B. THORNTON Junction City&#x27;s JaQwis Dancy moves through defenders on his way to his team&#x27;s second touchdown during their 2A state championship football game in 2014 at War Memorial Stadium in Little Rock. Junction City vs. Hazen
ADVERTISEMENT