A month late, participants Race to the Dome 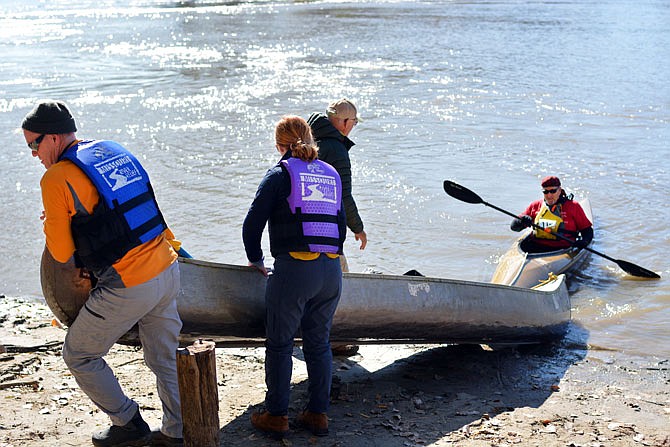 Boaters carry their canoe and kayak in from the river Saturday as they reach the finish line at the Wilson's Serenity Point at Noren Access during 10th annual Race to the Dome event.

After having to postpone due to poor conditions on the Missouri River, the 10th annual Race to the Dome charity canoe/kayak event was held Saturday to the delight of many river enthusiasts.

Missouri River Relief Executive Director Steve Schnarr said they normally hold the race on the first Saturday in October, but this year, at that time, the river had reached unsafe levels for the small watercraft to travel.

"It was chilly, but the sun helped a lot, and there wasn't a head wind," Schnarr said. "The river was still high, and that meant the current was fast, which people liked."

On Saturday, reports from the National Weather Service in St. Louis showed the river was at 19 feet in Jefferson City.

Last year, there were 122 boats entered, but race organizers said just under 100 signed up for this year's event. They said having to move the race back a few weeks was the main factor in having fewer racers since many of them had other commitments.

The race, which benefits MRR's education and clean up efforts on the river, has two courses. One stretches 15.8 miles from Hartsburg to Jefferson City, and the other goes 27.6 miles from Providence Access on Perche Creek to Jefferson City. Both races started simultaneously and ended at Wilson's Serenity Point at the Carl Noren Access on the north side of the river.

Schnarr said depending on the distance and paddlers' experience, it usually takes racers about two hours to complete their journey.

John McCoy, of Hannibal, and Larry Waters, of Illinois, were the first paddlers to make to the finish. They started paddling from Hartsburg at 10 a.m. and got to Jefferson City at 11:24 a.m.

McCoy, who sells boats, said the river has been his life for the last few years. Both men have competed in the Race to the Dome for many years.

"We just love this place," McCoy said, pointing to the surroundings at Wilson's and noting the many volunteers and family members who came out to support the racers.

When asked the secret to success in the race, Waters said, "Lot's of practice. You have to get in shape. You don't go out and just go for a float; you work."

"The current was faster than we've ever had," McCoy said. "It made it squirrelly at times, but Larry knows which side of the river to go on, and that's a big part of the strategy of this race - know where the fastest parts of the river are."

Both men said this is a fairly short race having done participated in the MR340 race, which takes racers from Kansas City to St. Louis on the Missouri River. Both men also plan to Race to the Dome next year.

"The scenery really added to the experience," McCoy said. "We're used to doing the race in October, and the colors of the trees along the river haven't quite changed at that point. Today, it was really pretty."