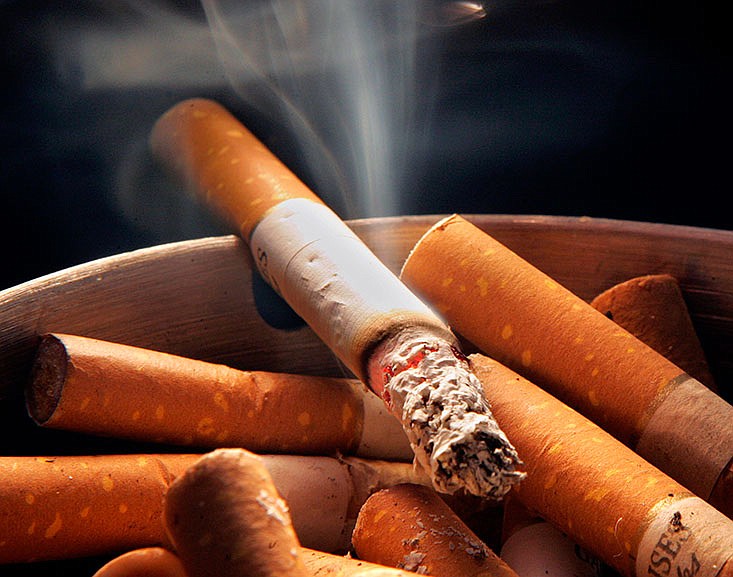 The volume of money tobacco companies and businesses that profit from tobacco donate to political campaigns in Missouri is staggering, according to a report from Tom Kruckemeyer.

Kruckemeyer, formerly an economist for the state Budget Office and for the Missouri Budget Project, said it's hard to ignore that the state has the lowest tax rate for tobacco products in the nation, while its residents are dying of tobacco-related illnesses at rates that surpass national averages.

"The thesis I'm advancing is that the Legislature has been bought off by the tobacco interests," Kruckemeyer said. "The correlation there is pretty hard to dispute."

Early this year, Kruckemeyer completed months of research into the state of smoking in Missouri. He gathered information from the Centers for Disease Control and Prevention, Missouri Department of Health and Senior Services, Missouri Ethics Commission, Missouri Budget Office, Campaign for Tobacco Free Kids, followthemoney.org (a nonprofit website that tracks donors to candidates) and other sources and presented his findings to lawmakers - either directly or with a link to an executive summary of his study at tomkmotobaccoreport.com.

In Missouri, Kruckemeyer said, about 11,000 deaths annually - 204,000 over 18 years since 2000 - are caused by lung cancer, heart disease, chronic obstructive pulmonary disease and cerebrovascular disease/stroke - conditions he categorizes as tobacco-induced.

With these health concerns and the state annually floundering at the bottom of the health charts for the United States, you would think lawmakers would make more of an effort to improve residents' health, Kruckemeyer said.

But they haven't, he added. Not a single local lawmaker supported raising the state's tobacco tax in 2012 - an issue that earned more than 49 percent of votes but narrowly failed, he said.

"I am firmly convinced that if some politicians came out in support of this, it would have passed," he continued.

Additionally, although the state has received about $2.9 billion from the Master Settlement Agreement - reached in 1998 between 46 states, five U.S. territories and the District of Columbia and the five largest cigarette manufacturers in the United States - it has spent only about 0.3 of a percent ($8.3 million) on programs intended to stop smoking.

Of the money received, more than $1 billion has been transferred into the state's General Revenue account, $1.2 billion has been used to help Missouri meet its Medicaid responsibilities, and $222 million on early childhood education, according to data Kruckemeyer provided.

Kruckemeyer, admittedly, has been an anti-smoking activist for many years. In 1976, while a college student in St. Louis, he led successful efforts to prohibit smoking in classes.

"It was terrible. People smoked in classes," Kruckemeyer said. "It was unhealthy. A lot of instructors would smoke while they were doing classes."

Money is making it nearly impossible to get lawmakers to consider legislation that would curb the state's addiction to tobacco, he worries.

He suggests contributions tobacco companies and companies that profit off tobacco, such as convenience stores, may influence state lawmakers.

The News Tribune went to followthemoney.org to try to duplicate some of his findings. The site indicated over the course of decades in politics, Gov. Mike Parson's various campaigns have received about $152,000 from the tobacco industry.

While candidates who haven't been involved in politics as long as him received less - for example, first-year Rep. Dave Griffith, R-Jefferson City, received $750 from the industry during his inaugural campaign. And first-year Rep. Rudy Veit, R-Wardsville, received $1,250.

However, his office said the governor is currently very concerned about flavored nicotine products and the significant rise in youth vaping, which the CDC has labeled an epidemic. He signed an executive order about two weeks ago, calling for a coalition of state government departments to create and launch a campaign aimed at reducing youth vaping.

Several local lawmakers, including Veit and Rocky Miller, R-Lake Ozark (who according to the followthemoney website has received $13,351 since his first campaign about eight years ago), said they knowingly accept donations from the tobacco industry, and as with donations from anybody else, the donations don't influence them.

"If it could influence you, you don't have any business in politics," Miller said.

Veit said he's not concerned about money given openly to campaigns. More concerning to him is money that finds back doors into campaigns.

"I'm more concerned about what they call dark money," he said.

Dark money is when politically connected nonprofit organizations that are not required to disclose identities of donors raise money for the purpose of influencing elections.

He and other lawmakers said they don't intend to create any additional laws to address smoking rates in the state.

Campaigns for Rep. Sara Walsh, R-Ashland, whom voters elected in a special election in 2017, have received $1,300 from the tobacco industry, according to followthemoney.

"I personally don't smoke or drink alcohol, however I believe adults should have the ability to use tobacco products if they so choose," she told the News Tribune. "I think adults are well-informed of the associated risks."

Followthemoney.org shows tobacco companies have given hundreds of millions of dollars to lawmakers over the years, Kruckemeyer said.

Despite what lawmakers say, those companies must have expectations for that money, he said.

He points out Reynolds American has contributed more than $120 million to political campaigns over 28 years across the nation. Altria has contributed about $80 million and Cheyenne International about $4.5 million.

George Parman, a senior manager at Altria argues followthemoney.org may be misleading. He points out Altria has been recognized as one of the most open about its political contributions. And, contributions to individual candidates are nowhere near what the website shows.

More than half of the money Altria contributes to campaigns is spent on policy-oriented ballot measures, he said.

State Sen. Mike Bernskoetter, R-Jefferson City, who spent eight years as a representative before his election to the Senate last year, said tobacco companies' contributions to his campaigns ($6,350, according to the site) have been negligible - at about 1.3 percent of his entire fundraising.

"The influence that has on my decision-making is the same as that of every other donation - zero," Bernskoetter said. "As the chairman of the Senate Agriculture committee, I recognize that there are still tobacco farmers in Missouri, and I give their concerns and views the same weight as those of every other farmer.

"But at the end of the day, I don't smoke or vape, and I don't encourage anyone else to start."