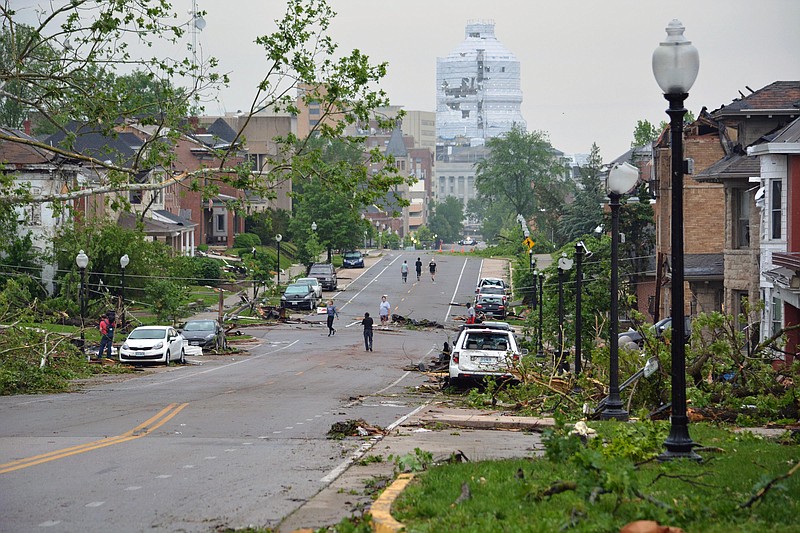 Kevin Young stood on the steps outside 518 E. Capitol Ave. with his hands on his hips, looking at the remains of his home. A large, gaping hole in the east wall exposed the top floor of the structure that housed the apartment where he had lived, and white bricks that once stood firm lay crumbled on the grass.

When Young and his girlfriend, Sharon, heard a tornado was near the intersection of U.S. 54 and Missouri 179 on Wednesday, they took shelter at the train station.

"Literally 30 seconds after being there, you could hear the freight train," Young said, looking up at what remains of his home. "It was madness, and coming home to this was heartbreaking."

A tornado barreled through Jefferson City late Wednesday night, leaving East Capitol Avenue residents to pick up the remains of their homes and businesses.

Property owners and volunteers sprinkled the street Thursday, analyzing the damage to some of Jefferson City's oldest and most historic homes.

The National Weather Service has preliminarily ruled Wednesday's tornado as an EF-3, with peak winds reaching 160 mph. The tornado damaged properties in Jefferson City between the Missouri River, Madison Street, Lafayette Street and the 2200 block of Christy Drive.

While some structures had minor damage - a couple of broken windows or downed trees in the yard - other homes and businesses took the brunt of the storm.

Young pointed out the randomness of the tornado and added he had two fish tanks in his home. While one was damaged, the other was unscathed.

Up the street, the fence guarding the hole in the Missouri State Penitentiary historic wall was caved in on itself and caution tape surrounded the damage. Across the street, men worked to remove trees that fell on the Marmaduke House, home to the Jefferson City Convention and Visitors Bureau.

The state owns the Missouri State Penitentiary, and the Missouri Office of Administration was continuing to assess damage to state buildings, OA spokeswoman Brittany Ruess said.

The fence guarding the hole in the Missouri State Penitentiary's historic wall caved in on itself, and caution tape surrounded the damage. A section of the old stone wall also collapsed.

Avenue HQ owner Holly Stitt had a storage vehicle backed up to the office at 623 E. Capitol Ave. and salvageable items were stacked inside the vehicle. The glass entrance was shattered, the second story was shredded, and the back of the structure was torn off, exposing the building's skeleton.

Next door at 621 E. Capitol Ave., home of Avenue HQ, the roof caved in, preventing Stitt from entering the building.

"It's a little bit heartbreaking because of all the hard work I've put in over the last eight years into this building and then to just see it all gone in one night, it's pretty amazing," she said. "It's devastating. But everybody is safe.

"It's just a building. It may be historic, may be my passion, but everybody is alive, and that's most important."

Nearby, men tossed plywood onto the roof of Tyler M. Woods Funeral Director, at 611 E. High St., and began boarding up the busted out windows. Several of the funeral home's vehicles were damaged, owner Tyler Woods said. Recent renovations to the building - including new flooring, light fixtures and landscaping - were also destroyed.

The building "lost a lot of history," Woods said, including a 125-year-old stained glass window that was a gift to the builder in 1900. However, he added, the structure of the building was in "far better condition than any of our neighbors."

While the building received heavy damage to the roof and windows, Woods said, the funeral home will remain in operation.

At Campus Coworking Space, 619A E. Capitol Ave., co-owner Missy Creed hugged friends and exchanged stories about the tornado, describing the wind and their amazement to the aftermath.

While many things inside Campus Coworking Space were lost in the wreckage, Creed said, they were able to save some gifts people gave them when they opened in January. However, Creed said, she was thankful that everyone was safe.

"We'll be fine," she said optimistically. "It's just going to take some time to clean up. We'll be OK. We'll figure it out."

Ward 4 Councilman Ron Fitzwater walked around East Capitol Avenue, analyzing the damage and shaking hands with property owners. Sidestepping downed power lines, Fitzwater said he "just could not believe it, in our city."

"I've seen things like this on TV, but you just cannot imagine the power of one of these things until you see it live," he said.

Creed has received numerous calls and texts from individuals wanting to help clean up the business. Jefferson City residents carefully carried out furniture and potted plants, working to avoid the twisted branches and bike racks in front of the business.

Workers with Love2Nourish set up tents on Lafayette Street, near the Missouri State Penitentiary, and passed out free water and food to property owners and volunteers helping with cleanup. Despite being only a block away from East Capitol Avenue, Love2Nourish was spared, owner Laurel Dunwoody said.

Love2Nourish recently moved to its new location at the intersection of East High and Lafayette streets after it had to vacate 202 E. High St. due to the building being declared a dangerous structure after the west wall of 200 E. High St. partially failed.

"Whereas that wasn't near what this is, I just can't imagine how devastating this is to everybody, so this is just one little thing we can do," Dunwoody said. "We just felt like it was the right thing to do."

While the scene was heartbreaking, Fitzwater said, the way people were jumping in to help property owners is a "testament to the willpower of this community."

Even though people are helping property owners clean up the buildings, Fitzwater urged individuals to stay home and not venture downtown.

"We have a responsibility to come downtown and make sure everything is taken care of, but if you don't need to be downtown - I mean, we've got flooding coming on top of this," he said. "Our police and fire, these guys and gals have been working all night long, and they do not need unnecessary folks and sightseers."