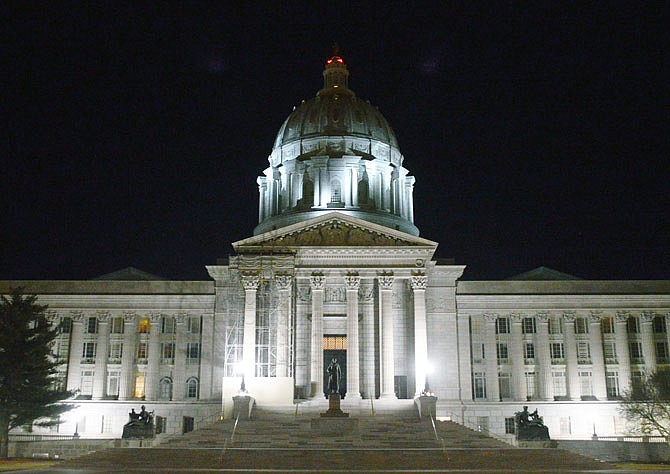 LED exterior lights illuminate the Missouri Capitol in this photo from January 2018.

Senators approved the legislation 24-10 early Thursday with just hours left before lawmakers' Friday deadline to pass bills. It needs at least another vote of approval in the GOP-led House before it can go to Republican Gov. Mike Parson, who supports it.

Parson on Wednesday had called on state senators to take action on the bill, the latest GOP-dominated state emboldened by the possibility that a more conservative Supreme Court could overturn its landmark ruling legalizing the procedure.

The Missouri proposal includes exceptions for medical emergencies, but not for pregnancies caused by rape or incest. Doctors would face five to 15 years in prison for violating the eight-week cutoff. Women who receive abortions at eight weeks or later into a pregnancy wouldn't be prosecuted.

Parson said the bill gives Missouri the chance to be "one of the strongest pro-life states in the country."

Senate Democrats launched into an attack on the bill before Republican supporters had a chance to bring it up for debate on the Senate floor. Lawmakers had faced a Friday deadline to pass legislation.

"So much of this bill is just shaming women into some kind of complacency that says we are vessels of pregnancy rather than understanding that women's lives all hold different stories," St. Louis-area Democratic Sen. Jill Schupp told colleagues. "We cannot paint with a broad brush and interfere by putting a law forward that tells them what they can and cannot do."

Missouri is among several states where abortion opponents are working with renewed enthusiasm following President Donald Trump's appointment of more conservative high court justices. Kentucky, Mississippi, Ohio and Georgia have approved bans on abortion once a fetal heartbeat is detected , which can occur in about the sixth week of pregnancy. Similar restrictions in North Dakota and Iowa have been struck down in court.

Alabama's governor on Wednesday signed the most stringent abortion ban in the nation , making performing an abortion a felony in nearly all cases.

Supporters say the Alabama bill is intentionally designed to conflict with the 1973 Roe v. Wade decision that legalized abortion nationally in hopes of sparking a court case that might prompt the justices to revisit abortion rights.

Missouri's bill also includes an outright ban on abortions except in cases of medical emergencies. But that would kick in only if Roe v. Wade is overturned.

If courts don't allow Missouri's proposed eight-week ban to take effect, it includes a ladder of less-restrictive time limits ranging from 14 to 20 weeks. Roe v. Wade legalized abortion up until viability, usually at 22 to 24 weeks.

Other provisions in the wide-ranging abortion bill include a ban on abortions based on race, sex or a "prenatal diagnosis, test, or screening indicating Down Syndrome or the potential of Down Syndrome."

The bill would also require that both parents be notified for a minor to get an abortion, with exceptions. Current law requires written consent from only one parent.

Gov. Mike Parson made it clear during a 14-minute, late-afternoon mini-rally in his Capitol office: There is no room for compromise on pro-life legislation.

"Thanks to the leaders in the (state) House and Senate, we have the opportunity to be one of the strongest pro-life states in the country," the governor said, to the applause of lawmakers and pro-life supporters gathered in the office.

"The unborn deserve (an) up-and-down vote - and I will call upon those senators who are standing up in a filibuster, to allow this issue to come up for a vote."

Parson said a vote on the proposed "Missouri Stands for the Unborn Act" was needed "so that the will of the people can be heard, and so that we can make a bold stand for life."

M'Evie Mead countered: "In terms of who gets to make the decision, when a woman faces an unintended pregnancy, we firmly believe - like the majority of Missourians - that that decision belongs with the woman and her health care provider.

"We're talking about health care - and health care is critical for all women, families and societies to function."

"Planned Parenthood advocates that women and their doctors make those health care decisions with people's health and lives at the center," Mead added. "That is what we believe.

"And a majority of Missourians believe that."

However, Susan Klein, executive director of Missouri Right to Life, told the News Tribune: "There is no compromise, whenever you're talking about people who want to take the life of babies through abortion, and those of us who want to protect the lives of the babies who are unborn - and protect the moms."

Opponents of the proposed new abortion law began efforts to block it in the Missouri Senate about 11:45 a.m. Wednesday - even though the bill had not been officially brought up for debate.

They ended their filibuster at about 4 p.m., when it appeared a compromise had been worked out.

However, a planned half-hour recess stretched more than five hours into the night, with no resumption of debate or any indication when the Senate might resume its discussion of the abortion bill or any other measure - even though Missouri's Constitution requires the lawmakers to end their session at 6 p.m. Friday.

What the bill does

Rep. Nick Schroer, R-O'Fallon, told those gathered in the governor's office his bill began as a "heartbeat" bill but was expanded during the legislative process.

"It starts off with a roughly eight-week abortion ban, once the heartbeat or brain activity can be detected in the child," Schroer explained. "If, for any reason, any court were to overturn that, we have a tiered severance package which would kick it to a 14-week ban."

If that limit, "which is linked to our scientific and legislative findings," he said, also were blocked by a court, the law moves the limit to 18 weeks, then to 20 weeks.

The bill also would "ban abortions in the state of Missouri if, for any reason, Roe v. Wade is overturned (or) the Supreme Court dictates that it is going to be up to the states to legislate in the area of abortion," Schroer said.

The bill's provisions include allowing criminal charges to be filed against a doctor who performs a nonemergency abortion, with a potential prison sentence ranging from five to 15 years.

The measure includes an exception for an abortion in an emergency situation, but it does not include any exceptions for an unwanted pregnancy caused by rape or incest.

Klein said, "If a woman's life is in danger, then the abortion option is still an option.

"As far as rape and incest, we don't believe that two wrongs make a right - and why put somebody through the trauma of an abortion that has so many side-effects and the ability to affect their longterm future?"

Mead said: "Politicians do not belong in the exam room with women and their doctors, and they especially don't belong (there) when a woman is facing the survival of rape or incest.

"That is the absolute worst place for politicians to intervene in someone's health care decision."

Sen. Bob Onder, R-Lake St. Louis, said, since the 1973 Roe decision, Missouri lawmakers over the years have passed bills that, "bit by bit, have protected the health and safety of Missouri women, and we have encouraged Missouri women to choose life for their unborn children."

Onder - who just a day earlier was part of a nearly 28-hour filibuster against Parson's workforce development bill because a half-dozen senators objected to some of its parts - said the bill's opponents wanted to "weaken or dilute, or even gut altogether, the bill. We can't let that happen, can we?"

Schroer said he's confident the bill will withstand a legal challenge - even though its opponents argue it's unconstitutional under the current U.S. Supreme Court rulings in Roe v. Wade and Planned Parenthood v. Casey (1992).

"We have had multiple attorneys - both in Missouri and Washington (D.C.) - look at the language of this bill," she said. "We believe this bill can be upheld by the court."

Several times during her interview, Klein said: "This bill is about protecting unborn babies and protecting the moms."

She added: "The moms have lots of opportunities to look at carrying their babies to term.

"There's lots of help that this (Legislature) has put into place - alternatives to abortion, 'Show Me Healthy Babies' (and) adoption programs out there."

Opponents of Missouri's proposed new abortion law began efforts to block it in the Missouri Senate on Wednesday morning - even though the bill wasn't officially brought up for debate.

The discussion began with Sens. Jill Schupp, D-Creve Coeur, and Lauren Arthur, D-Kansas City, talking about pro-life bills passed in Alabama this week and in Ohio earlier this year.

They talked at length about an Ohio case where an 11-year-old girl was raped - but some said the assault was the girl's fault because she was rebellious.

Arthur said the proposed law likely is "unconstitutional and against the (current) law."

The bill likely to be debated formally at some point would prohibit an abortion after the unborn baby's heartbeat is detected - and would trigger a statewide, outright ban on abortions if the U.S. Supreme Court overturns the 1973 Roe v. Wade decision that said women had a constitutional right to have an abortion.

State Sen. Scott Sifton, D-Affton, noted that, in his St. Louis County district, "opinions on this issue are evenly divided - and "3 percent (of them) want to hear about other things" than abortion.

"All of these cases are difficult," Sifton said, "particularly when it comes to rape, incest (and) sex trafficking."

State Sen. Brian Williams, D-University City, said the conversation should be "about impacting the issues in our whole state."

And state Sen. Karla May, D-St. Louis, said the discussion should be about people's faith.

"We find ourselves in peril - not just when it comes to abortion," May said. "The big issues is, when you're trying to resolve those issues that life is bringing you, where do you go? And most people turn to their faith."

May then talked about people's need to have faith in Jesus' teachings, noting he never denied his followers the right to make a choice.

Going into the early afternoon, none of the bill's supporters had taken the floor to talk about their view of the issues.

But earlier this week, state Sen. Bob Onder, R-Lake St. Louis, said he and colleagues were ending their effort to block an economic development bill with provisions they didn't like because it was "time to turn our attention to protecting human life."

In a news release announcing the 5:30 p.m. news conference, Parson said: "As certain senators filibuster the pro-life legislation, blocking Missouri's ability to pass one of the strongest pro-life bills in the country, Gov. Parson will join House and Senate legislative leaders in standing for life, protecting women's health, and advocating for the unborn."