Protests erupt in Pittsburgh after cop cleared in shooting teenager 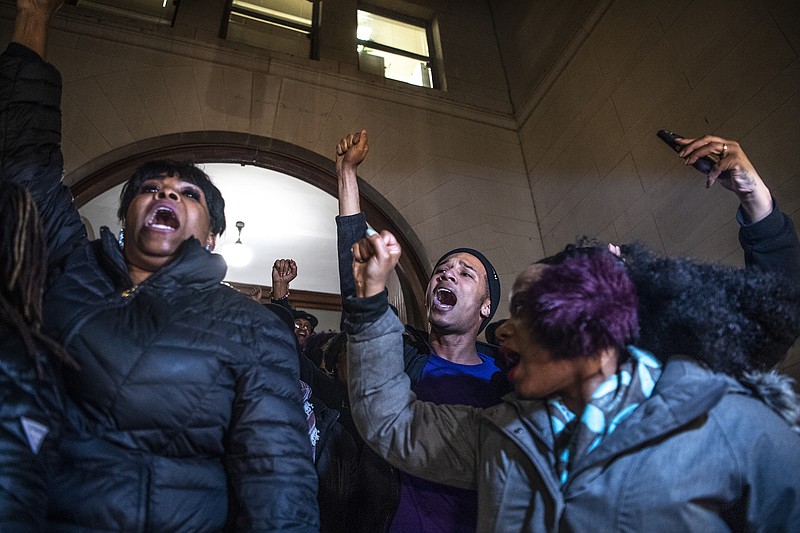 People, including Khalil Darden, 18, of Penn Hills, Pa., center, and Pennsylvania State Rep. Summer Lee, right, protest after they learned a not guilty verdict in the homicide trial of former East Pittsburgh police Officer Michael Rosfeld, Friday, March 22, 2019, at the Allegheny County Courthouse in downtown Pittsburgh, Pa. A jury acquitted Rosfeld, a former police officer Friday in the fatal shooting of Antwon Rose II, an unarmed teenager as he was fleeing a high-stakes traffic stop outside Pittsburgh, a confrontation that was captured on video and led to weeks of unrest. (Alexandra Wimley/Pittsburgh Post-Gazette via AP)

PITTSBURGH (AP) — Shots were fired overnight through the office window of the attorney for a white police officer acquitted in the killing of an unarmed black teenager, and several hundred people gathered in protest Saturday over the verdict that left Pittsburgh a city on edge.

The jury’s decision late Friday in the deadly shooting of 17-year-old Antwon Rose II upset his family and touched off a nighttime demonstration by about 100 people. It was followed by another protest Saturday afternoon at an intersection called Freedom Corner in the city’s Hill District neighborhood, the historic center of black cultural life in Pittsburgh.

One man held a sign with the names of black men killed by police around the U.S.

“It’s very painful to see what happened, to sit there and deal with it,” Rose’s father, Antwon Rose Sr., told the crowd. “I just don’t want it to happen to our city no more. It’s happening like every other day. We’ve got to do more in our community so they have more stuff to do.”

Addressing the “young brothers,” the teenager’s father said: “Streets ain’t it. Read books, man. Do everything you got to do, but leave those streets alone. It ain’t worth it.”

The mostly white crowd then began marching toward downtown Pittsburgh.

Overnight, five to eight shots were fired into the building where defense attorney Patrick Thomassey works, police in nearby Monroeville said. Police said they had been staking out the place as a precaution when they left to answer another call around midnight, and that was when the gunfire erupted. No one was hurt.

Former East Pittsburgh Police Officer Michael Rosfeld was charged with homicide for shooting Rose as the teenager ran away from a traffic stop last June. Rosfeld walked out of the courtroom a free man Friday after telling the jury he thought Rose or another suspect had a gun pointed at him and he fired to protect himself and the community.

“I hope that man never sleeps at night,” Rose’s mother, Michelle Kenney, said of Rosfeld, according to the Pittsburgh Post-Gazette. “I hope he gets as much sleep as I do, which is none.”

The verdict leaves Rose’s family to pursue the federal civil rights lawsuit they filed against Rosfeld and East Pittsburgh, a small municipality about 10 miles from downtown Pittsburgh, where the trial was held.

Rose’s death — one of many high-profile killings of black men and teens by white officers in recent years — spurred angry protests in the Pittsburgh area last year. Immediately after the verdict, scores of protesters blocked intersections and entered two hotels, chanting “17” for Rose’s age. No arrests were made.

Rose was riding in an unlicensed taxi that had been involved in a drive-by shooting minutes earlier when Rosfeld pulled the car over and shot the teenager in the back, arm and side of the face. Neither Rose nor another teen in the taxi was holding a weapon when the officer opened fire, though two guns were later found in the vehicle.

The 12-person jury — including three black members — saw video of the fatal confrontation. The jury took less than four hours to reach a verdict.

Thomassey, the defense lawyer, told reporters Rosfeld is “a good man. He said to me many times, ‘Patrick, this has nothing to do with the kid’s color. I was doing what I was trained to do.’” Thomassey said he hopes the city remains calm and “everybody takes a deep breath and gets on with their lives.”

Pittsburgh was in the spotlight less than five months ago, when a gunman ranting about Jews killed 11 people at a synagogue.

Rosfeld had worked for the East Pittsburgh Police Department for only a few weeks and was sworn in just hours before the shooting.

Prosecutor Jonathan Fodi argued that the video showed there was no threat to the officer. But a defense expert testified Rosfeld was within his rights to use deadly force to stop suspects he thought had been involved in a shooting.

Prosecutors did not call their own use-of-force expert — a decision the American Civil Liberties Union of Pennsylvania questioned. But Mike Manko, a spokesman for the district attorney’s office, said prosecutors were confident they had what they needed to make their case.

Shortly before the traffic stop, another person in the taxi, Zaijuan Hester, rolled down a window and shot at two men on the street, hitting one in the abdomen. Hester, 18, pleaded guilty last week to aggravated assault and firearms violations. He said he, not Rose, did the shooting.

Prosecutors had charged Rosfeld with an open count of homicide, meaning the jury had the option of convicting him of murder or manslaughter.