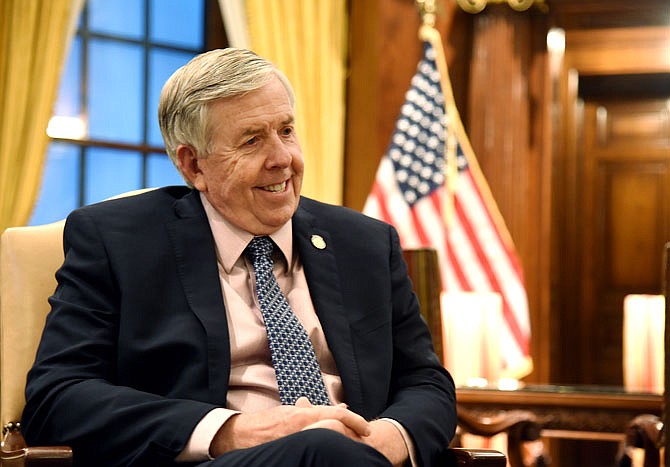 While seated for an interview Thursday, Gov. Mike Parson reflects upon his first year as governor and some of the things that have transpired in that time.

Gov. Mike Parson told the News Tribune last week it sometimes is hard to believe he's been governor now for more than a year because it seems like much of the time has sped by.

But his governorship began in a figurative whirlwind.

On the first weekend in June last year, Mike Parson and his tiny staff were scrambling.

Taking over the governor's job

"There was only like a handful of people - maybe four or five - who stayed on."

Parson, now 63, had about a dozen employees in the lieutenant governor's office, while the governor, historically, has had a much larger staff.

But he became governor with no legal team, communications team or legislative team, he said.

"Those were big shoes to fill - and you had to fill them in two days," he recalled. "Once I got sworn in, (we) literally were on the phones all weekend, asking somebody to come to work for you at the governor's office," starting the following Monday.

Parson is proud of the team he's put together in the governor's office, "who had the experience that I thought were key people to making us run as smoothly as we had the first year."

Without them, the governor said, "It would have been an impossible task."

It's no secret that Greitens didn't communicate much with Lt. Gov. Parson.

But, when Greitens resigned last year, and Parson became governor, one of his early decisions was to keep the department directors Greitens had chosen.

"But the one thing I found out early on - they were all professionals in their own right. They were all trying to do a good job for the people of the state of Missouri."

There have been some changes since then - Drew Juden left Public Safety and Sandra Karsten took over. Joel Walters left Revenue, and Steve Corsi left Social Services this month.

After serving six years in the U.S. Army, including two tours overseas, Parson returned to Missouri and settled in the Bolivar area.

In 1992, he was elected as Polk County's sheriff and served 12 years in that job before winning a seat in the state House of Representatives.

After six years there, he won a seat in the state Senate, and served there six years before becoming lieutenant governor in January 2017.

"Of the other jobs I've had in this (Capitol) building, nothing compares to this job," the governor said. "I feel like I worked pretty hard in those other positions - but there's no comparison.

"The demands on this job are pretty incredible, just the daily grind that goes with this and what comes across your desk."

The workload is a combination of political issues, policies, department head/Cabinet issues, proposed laws that must be signed or vetoed, or the concerns of "one of the 57,000 state employees," he said.

Now, 54 weeks after becoming governor, Parson is in Europe this week, representing Missouri on his first overseas economic development trip.

"When you talk about the Boeing type, the aerospace industry, (and) some of the investment firms that we have overseas that are doing business here," he said, "I think there's some opportunities there to probably try to expand some of the business footprints they already have in our state."

A news release announcing the trip said it is being paid for by the nonprofit Hawthorn Foundation, which has organized similar trips for administrations of both parties for the last several decades.

Parson and the business and government leaders traveling with him plan to make several stops in France, Germany and Switzerland.

"It's not always about what the incentives are," the governor explained during last week's interview.

"It's more about, what do you have to offer for the employees nowadays? Because, if you meet a good CEO or a good business leader, they're going to talk to you about, 'Why do I want to move my company to Missouri? What's it going to be like if I bring employees to Missouri? What is that atmosphere like?'"

Parson said the competition among the states is "tough" and "pretty fierce."

He explained: "Right now, you've got a good economy out there. We're all trying to find qualified workers to meet the demands of these industries."

Parson said his personal background as a small business owner will help during his conversations with the CEOs and other business leaders he meets during the trip.

He's been a cattle farmer all his life, the governor noted, adding: "I used to be in the gas business, so I understand what that side of it is - dealing with the (federal) EPA (and the state) Department of Natural Resources, with Social Security, with taxes and what that all really means to affect a business - and what the regulatory environment means for businesses.

"I think, when you can go in there and relate to that with those CEOs and those business people, it's a huge advantage if you've been in business before and you're talking to them."

Missouri has been in the national spotlight over abortion laws and the possibility the state would not relicense the only abortion clinic in the state - Planned Parenthood's facility in St. Louis.

Parson said his goal has been to keep politics out of the debate.

"This is not about the political. This is all about, are we running a clinic that's safe in the state of Missouri?"

He said he understands the politics of passing a law - which he signed last month - that would prohibit most abortions after eight weeks of pregnancy and has no exceptions for women who've become pregnant through rape or incest.

But the controversy over the St. Louis clinic really is "about the safety of women in this state," Parson said. "This is about making sure that if you go into a clinic, that you have the ability to think that this clinic should be operating like any other clinic in the state."

Parson said he doesn't believe Planned Parenthood is meeting the state's standards while the organization says it has done everything the state has asked it to do.

"If you meet the standards, you have every right to open your doors," the governor said. "As governor, I have to make sure they can do that."

Planned Parenthood filed a lawsuit in St. Louis Circuit Court over the state Health and Senior Services Department's failure to renew the clinic license, and the court has issued a temporary injunction allowing the clinic to remain open while the legal battle continues in the court.

When Parson became governor last year, Greitens already had signed about half the bills that lawmakers had passed during the 2018 session.

That left the rest, including the 2018-19 state budget, to Parson - who had not been involved in much of the discussions about those laws, but had to act on them by the middle of July.

"That was extremely difficult," he recalled. "Again, it was such a steep learning curve.

"We were working long hours every day trying to analyze all those bills."

After a year in the chief executive's office, he's more comfortable with the process now.

"This year, we knew what the legislation was and we were following it," he said. "And we knew a lot more about the appropriations process."

"Legislators worked (well) with the governor's office on this," he said. "We really came out with what I believe to be a good budget for the state."

Parson said he's proud of that budget, which included some funding for bridge improvements and for helping develop the state's future workforce.

The governor thinks one continuing challenge is restructuring government.

In the first year, he issued an executive order moving a number of agencies out of the Economic Development Department, so it can concentrate on its core mission, while some of its more regulatory functions were moved to other state departments.

Parson noted the governor has the power to make changes and, because he didn't make any political promises running for the office, "That's been an advantage I've had," he said.

"If you're really trying to focus on what is the right thing for the state of Missouri, you'll find out there is a lot of common ground between a lot of people to do that."

He expects that improving teachers pay will be an issue that must be addressed in the coming years.

Parson acknowledged state government's workforce has been trimmed by more than 9,000 jobs - mostly through attrition - starting in Matt Blunt's administration from 2005-09.

"I think we will do more," he said. "The only reason I say that is because of the patterns we've set."

He cited the Economic Development reorganization and the decision to close one of the state's two prisons in Cameron - freeing up money to give extra pay raises to some of the Corrections Department's lowest-paid employees.

"Next year, we're probably going to take a look at Medicaid, Mental Health and other agencies like that," he said. "It means being more efficient (and) accountable.

"So, if that means less employees, that's fine, if we can still do the job."

Outsourcing some state jobs also may be a solution that should be looked at, Parson said.

"That's just the times that we're in," he explained.

He's not sure now what streamlining and fixing those problems will mean for the state's future employees.

One thing he intends to do is ask current employees more about the jobs they do and the work that needs to be done.

"If you'll listen to the employees that have been out there awhile, a lot of them can tell you what's efficient and what's not," Parson said. "And when they do tell you that, then you've got to be willing to say, 'OK. Let's make some changes.'"