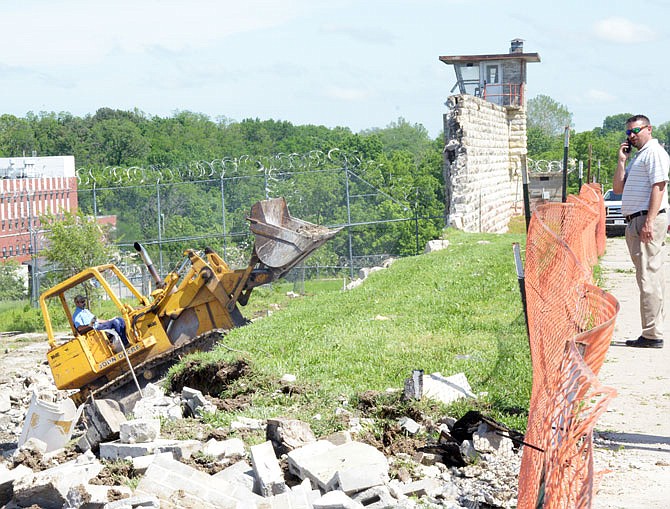 Workers clean up debris at the Missouri State Penitentiary following the May 22, 2019, tornado that swept through Jefferson City.

Tours of the Missouri State Penitentiary have been temporarily suspended due to the damages inflicted from the May 22 tornado, officials with the Jefferson City Convention and Visitors Bureau announced Friday morning.

"We didn't know the full extent of the damage, and we had to go through the facility before we could make the official announcement," CVB communications manager Brittney Mormann said.

Part of the old MSP wall along Capitol Avenue collapsed, and there was damage to the fence in the rear parking lot off Chestnut Street. But the main reason for the closure was the damage to the prison's Unit 4, better known as A-Hall.

"This is where Sonny Liston spent time in the prison and where the dungeon cells are located," Mormann said. "We spend most of the time on our tours in this building. It has significant roof damage, and how long it will take to repair it, we just don't know right now."

"Since the tornado hit Jefferson City last week, the Office of Administration has demolished a damaged guard tower and stabilized a damaged wall to improve safety at the Missouri State Penitentiary," OA spokesperson Brittany Ruess said.

The tower taken down was known as guard tower 2, which is just east of guard tower 1 at the corner of East Capitol Avenue and Lafayette Street. The tower was part of the wall along East Capitol that was damaged by the storm.

"OA will bring in a structural engineer to assess the penitentiary, which will help us better understand the extent of damage to the site," Ruess said.

Mormann said they are working with Jefferson City and Office of Administration officials to try and determine how long it will be before they can resume tours.

CVB officials said the tours not only have attracted daytime visitors to Jefferson City but have encouraged people to stay overnight. Of the MSP tourists who filled out a CVB's survey, 25 percent stayed overnight, with many expressing interest in the old prison's nighttime paranormal tours.

"Our mission continues to focus on the preservation and restoration of the historic MSP," Mormann said. "We're not sure how much money we'll be losing by not having tours, but we would much rather see the community get back on its feet than worry about an attraction."

For those who have already purchased tickets for tours, Mormann said they can contact the office for refunds.

"If they haven't contacted us, then we'll be working on sending them a refund," Mormann said.