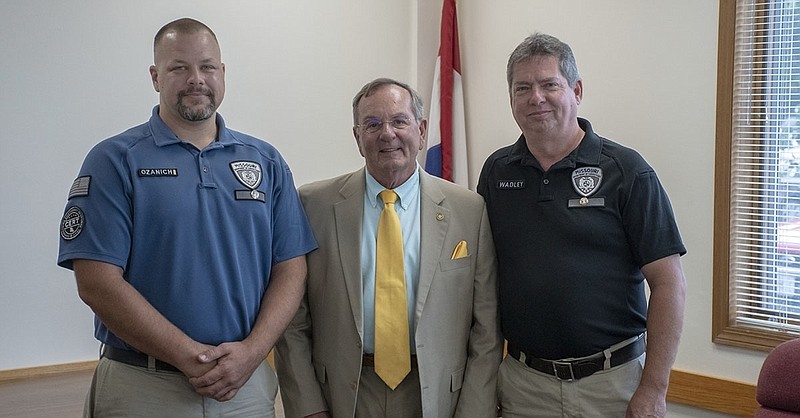 <p>Courtesy of Missouri Department of Corrections</p><p>Jefferson City Correctional Center officers Levi Ozanich, left, and Jerry Wadley, right, pictured with state Rep. Dave Griffith, R-Jefferson City, were recognized with 2019 Director’s Awards of Valor from the Missouri Department of Corrections for their efforts after a fellow prison staff member was assaulted by a prisoner July 27, 2018.</p>

Two Jefferson City Correctional Center officers have been honored with 2019 Director’s Awards of Valor from the Missouri Department of Corrections.

Jerry Wadley and Levi Ozanich were recognized for their efforts after a fellow prison staff member was assaulted by a prisoner July 27, 2018.

The prisoner, who was serving time for two murder convictions and had a history of violence, escaped from an outdoor recreation cage in administrative segregation at JCCC and attacked a member of the support staff, pulling her to the ground and holding an improvised weapon to her throat, according to DOC officials.

A dozen officers responded. Two of them — Wadley and Ozanich — were instrumental in diffusing the situation.

Because Wadley and Ozanich knew the prisoner and had established a rapport, they were able to keep him calm while also ensuring their colleagues kept a safe distance, according to a DOC news release.

“I said, ‘I know that you have stuff that you need to get off your chest, but this is not the way to do it,’” Ozanich recalled.

After Wadley and Ozanich talked with the prisoner for a few minutes, he handed over his weapon, a piece of wire taken from the cage he had escaped from, and released the staff member and submitted to restraints, DOC officials said. No one was injured in the incident.

“It’s all about reading people,” Wadley said. “We did what we had to do, and everyone got out of there unharmed.”