Barnes reflects on 8 years in Legislature 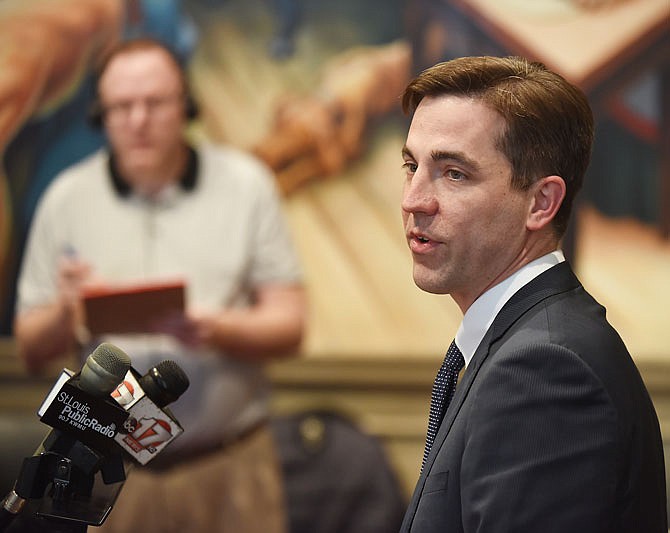 At noon Wednesday, Jay Barnes no longer will be a Missouri lawmaker.

His eight years as a state representative will end - with Dave Griffith succeeding him as the 60th House District representative.

"I will not miss this at all," Barnes told the News Tribune in a recent interview. "Knowing what I know now, I'm not sure I would make the same decision" to run for the House that he made in 2010.

But, Barnes added: "Was it the wrong choice? No, I don't think so.

"I've done my best. I think I leave here a better person, a better lawyer than when I arrived."

Being a state representative has been "a tremendous privilege and opportunity," he added, "a privilege to be the voice of 40,000 people in the community in which I grew up - and to stand on this floor and fight for them."

Barnes said he came to the Capitol with two specific goals in mind: "Redevelopment of the prison property - because that was one thing that I thought I could control, (and) I wanted to help state employees get pay raises - but that's not something that any one state representative can either make happen or not make happen."

Last year, he noted, lawmakers passed and the governor signed a bill that hands 32 acres of the former prison property to Jefferson City, "and I think good things are happening there. So, that goal was accomplished."

Barnes doesn't have any "great regrets" about not being able to get something passed that he really wanted.

"There's a lot of things I wish were better about state government," he said. "The state spends enough in hand-outs to businesses - that are likely to add jobs, anyway - that it could shave a significant portion off the state income tax for individuals.

"And I think that ought to be the policy - instead of the state trying to pick winners and losers in the economy, with these tax handouts to businesses, that we ought to shoot for the lowest marginal tax rate for everyone."

Lawmakers will have to deal with "a state budget problem" in the next few years, Barnes said, noting the continuing demands for money for roads, education and Medicaid assistance - "the same issues as always."

He recalled that his predecessors in the House seat, Bill Deeken and Carl Vogel, occasionally would talk with him about issues - but didn't tell Barnes how to be the area's state representative.

"Everyone is their own person," Barnes noted. "I did the best that I could.

"I put politics aside and considered myself the representative of this community, whether they voted for me or not, and always tried to do the right thing for them."

Barnes said he has "a lot of good memories" of his time in the Legislature - including his ability to shape legislation without always having his name on it.

But his legislative career also didn't keep him out of the headlines.

In his freshman year, Barnes was tasked with chairing a special committee to investigate Mamtek - an artificial sweetener factory planned for Moberly with the help of state dollars - that never materialized.

And his final year was filled with his selection as the chairman of the House Special Investigative Committee on Oversight - created by then-Speaker Todd Richardson, R-Poplar Bluff, to investigate the legal situation surrounding then-Gov. Eric Greitens, after he'd been indicted by a St. Louis grand jury for a felony invasion of privacy charge, based on allegation he'd taken a photo of his mistress, who was partly or mostly nude, without his consent, while both were in the basement of his St. Louis home while his wife was out of town.

The grand jury later would charge the governor with computer tampering, another felony, for taking email and donor list information from The Mission Continues, a veterans service charity Greitens helped found in 2007, and using that information in 2015 for his then-new candidacy for governor.

Although both charges eventually were dropped - the latter in exchange for Greitens' resigning from office June 1 - Barnes' committee found information that substantiated both of those criminal complaints.

"The task assigned to us was to make fact determinations based on documents and witness testimony," he said. "That's exactly what we did.

"The committee was unanimous in every report that it issued."

Barnes had been an early supporter of Greitens' campaign for governor, and he remains frustrated Greitens chose not to work with the House special committee.

Greitens had called the committee's work a "witch hunt."

But, Barnes noted: "He had the opportunity to show up. On Day 1, they said he would participate and they welcomed the inquiry.

"And he failed to show up," even after several formal committee requests.

Barnes has asked the Missouri Ethics Commission to investigate possible violations of state campaign finance laws involving A New Missouri Inc., a not-for-profit organization formed in 2017 to support Greitens and his policies, using federal tax laws that allow it to raise money while keeping the identity of its donors hidden from public view.

"We had documents that, I think, were proof of violations of campaign finance laws here in Missouri," he told a reporter, "and I thought it was appropriate to file a complaint with the Missouri Ethics Commission."

For its part, the commission, by law, can't even acknowledge to the public that it received Barnes' complaint or is doing anything with it.

Barnes said there were some similarities between the Greitens-related committee last year and the Mamtek probe eight years earlier.

"Mamtek was a very detail-oriented process," he recalled. "We were going to get as much information as possible to figure out what actually happened.

"And I viewed it as my job as chairman to take the politics out of it and have a factual investigation to which everyone on the committee could agree."

To the "committee's credit," Barnes said, "everyone put politics to the side, and we issued a report that was fact based, that didn't try to burn Gov. Nixon in ways that were not necessary."

Barnes said both committees felt political pressure either to damage the governor when it was Nixon, or to protect Gov. Greitens.

But, he said, he wasn't interested in doing either.

"I think that my character was formed as a kid growing up in this community," Barnes explained. "It's funny, this idea that I was ever going to get pushed around.

"In many ways, I don't know that I am all that different now than I was - some of the qualities I had as a 15- to 18-year-old who was somewhat rebellious against authority and unafraid of anything

"It's just that I'm not going to let political pressure scare me away from anything.

"There are a lot of things in life that are scarier than anything that can happen in politics in the state of Missouri."

Term limits, approved by voters in 1992, prohibited Barnes from running for another two-year term in the House.

As he explains in a column on page A10 of this newspaper, Barnes thinks term limits helped force him to make decisions about his future but, overall, are a bad idea.

"The theory behind it was that you'll get citizen power to come up here and take charge," he said. "The reality is, it gives most of the power to lobbyists, who know how the Capitol operates, and to donors, who are necessary for people who want to rise to the next level, and to executive branch officials who can out-last any legislator."

It takes time for people to learn how the system really should operate, to propose, debate and pass meaningful laws, he said - and by the time lawmakers really have figured out the complicated process of getting ideas vetted and laws passed, term limits mean "it's time to go."

And that doesn't benefit the people.

"I have no intention to run for any other political office, ever," Barnes said. "I don't want any other job in politics."

In thinking about his own political future, and whether he should run for the seven-county 6th District Senate seat, Barnes ultimately decided he wouldn't have been happy with that job.

"From the beginning, I was not the greatest event-attender" even in the Jefferson City House district, Barnes said. "I had one kid at the beginning. Now I have four.

"And, if I lost anyone's vote because I was at a (child's) soccer game instead of at a chicken dinner, well I guess I just lost that vote.

"Because my kids' childhood is more important than any single, or series, of chicken dinners that come as part of the territory of any legislator."

His future will include a number of coaching assignments for his children's sports activities.

"I look forward to coaching multiple teams, every basketball season from now until 2031," he said - when his youngest will be in high school, and he'll settle for being another parent in the stands, cheerleading for his child and the team.

Barnes also will return to being a full-time lawyer.

"I've joined a national law firm, called 'Simmons Hanly Conroy' - over the past nine years, I've been involved in a number of consumer class action (lawsuits), with a focus on consumer privacy," Barnes explained. "It's really hard to do that kind of work in a law firm with one to three lawyers.

"So, I've joined a larger law firm as a shareholder, and am working on the same kind of cases, there. We represent consumers who have been wronged."