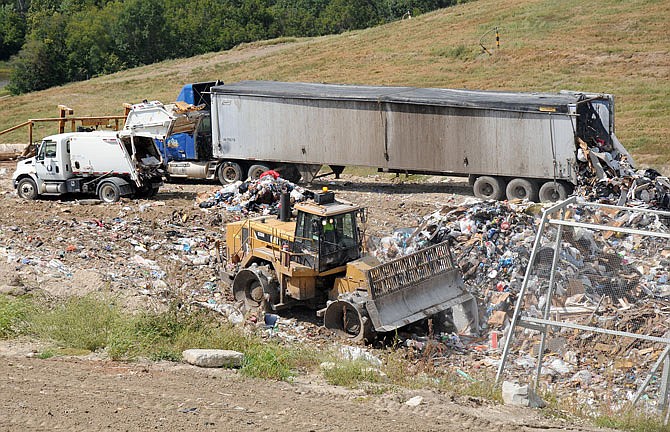 There are "no plans for Jefferson City to lose its single-stream recycling," she added.

The city has a solid waste agreement with Republic Services that runs from 2016-26.

"There's are no changes officially coming down the line regarding recycling services in Jefferson City provided by Republic," Johnston said. "We continue to work with Republic on our contamination outreach to decrease contamination on recyclables."

Republic Services has been promoting "Empty. Clean. Dry." The promotion encourages residents to empty recyclable items, and wash and dry them before placing them in recycling.

The recycling industry has been scrambling after China stopped accepting many recyclable materials from the United States because the items were too contaminated.

Wardsville City Clerk Shirley Stockman also confirmed the village had been notified of the change. Both said the company planned to notify customers in each of their communities.

After each community's recycling service day during the week of March 25, Republic is asking customers to leave the recycle carts at curbsides so Republic can pick them up within three days of the final service.

In a letter sent to the city officials in affected towns, Republic officials said the main reason for the move was, "China's recent import restrictions and bans has exposed that the residential recycling model in the United States is broken."

Reese said Thursday: "Republic officials told us China had been accepting recycling with 30 percent contamination, but they've lowered the contamination amount to .7 percent and the company said that's unattainable."

Both Reece and Stockman said Republic officials told them the only way they could continue offering the service in the towns would be to add $11 to each residential trash bill in the communities.

"We have 210 people serviced by Republic in St. Martins, and for most, they couldn't afford the increase to recycle," Reece said.

In their letter, Republic officials said the model for doing recycling has changed from when they first began years ago. This includes higher costs for processing material and lower commodity values.

"Recycling in the future must focus on sustainable material management, not simply diverting material that may have no beneficial use," Republic officials wrote.

As far as options for these towns, there aren't many.

"The only one now would be to work with the Mid-Missouri Solid Waste District in Columbia who could possibly get us a grant to pay for public recycling bins," Reece said. "However, other cities have tried that in the past and it's hard to keep illegal dumping from taking place. For people who want to do the right thing for the environment, the options are really getting constricted."