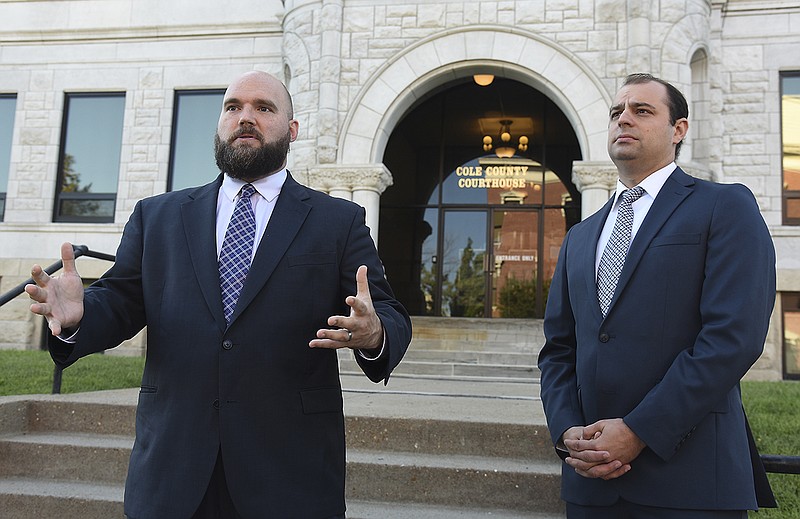 Dave Roland, left, and Patrick Ishmael address the media Wednesday morning outside the Cole County Courthouse in Jefferson City, where Roland filed a lawsuit on behalf of Ishmael and the Show-Me Institute, for which Ishmael is director of government accountability. Roland is director of litigation and co-founder of Freedom Center of Missouri.

The Show-Me Institute announced Wednesday it has filed a Sunshine Law case against the state's Office of Administration.

The Show-Me Institute describes itself as a think tank "dedicated to promoting free markets and individual liberty."

The institute sought from OA lists of active bargaining unit employees sent to the American Federation of State, County, and Municipal Employees Council 72 labor union in 2016, 2017 and 2018, according to a copy of the Show-Me Institute's records request to the OA, filed with the lawsuit in Cole County Court.

AFSCME describes itself as the United States' largest public services union, with 1.4 million members in about 3,400 local unions and 58 councils and affiliates.

The labor contract stipulates that once each quarter the OA "will provide the union with a current list of active bargaining unit employees," along with information for each employee including their name, pay, work address, pay location address, home address and mailing address.

Show-Me Institute Director of Government Accountability Patrick Ishmael requested that OA's custodian of records provide copies of that information "in precisely the same format as they were provided to AFSCME Council 72," according to the institute's Sunshine request, dated June 6, 2019.

A response, dated the next day, from OA legal counsel Kelly Hopper - included in the Show-Me Institute and Ishmael's lawsuit filing - stated the records would be provided, but with individually identifiable personnel information redacted, pursuant to Missouri law and OA policy.

On Aug. 8, Dave Roland - director of litigation at the Freedom Center of Missouri, who is representing the Show-Me Institute and Ishmael in the lawsuit - wrote to OA's Brandi Caruthers that the records received were about 90 percent redacted, and claimed, citing the Sunshine Law, that the OA could not use its policy to justify withholding information, because the same information had already been provided to AFSCME.

"If the Office disregards its own policy for the benefit of one private entity, it can - and must - disregard the policy for any other private entities that might seek access to the same information," Roland wrote, adding that litigation would be pursued against OA if the office did not comply as desired.

An Aug. 12 response from Hopper stated it was not accurate to assume the information provided to the labor union was done so under the Sunshine Law, but that it was instead provided pursuant to the labor agreement with the union.

"I can assure you that the Office of Administration has not entered into a contract granting anyone, including AFSCME, 'the exclusive right to access and disseminate any public record,'" Hopper wrote.

The Show-Me Institute and Ishmael's lawsuit names the OA and Caruthers as defendants - Caruthers as the custodian of records for the Division of Personnel within the OA.

OA Director of Communications Brittany Ruess told the News Tribune in an email that the office had not been served a lawsuit by the Show-Me Institute and therefore had no comment on the case.

The summons was issued by the Cole County Circuit Court on Wednesday, according to online court records, which also did not show that the summons had been served.