Trucks rumble to Capitol so drivers can be heard 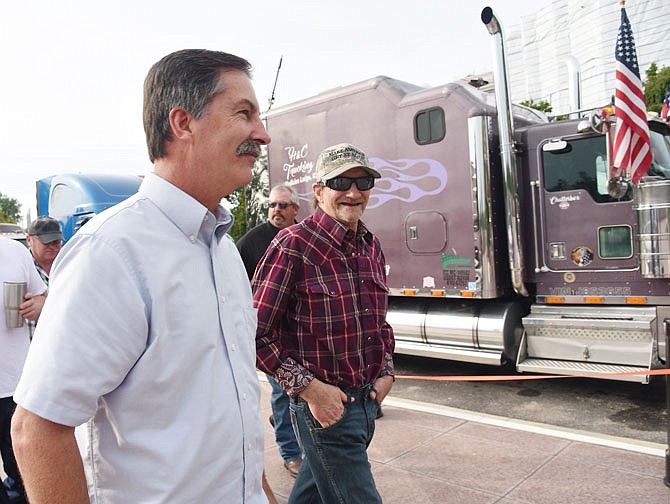 Rep. Mike Moon, R-Ash Grove, left, listens to the concerns of John Koch, right, a retired trucker from Springfield who spent 34 years as an independent driver. He joined other drivers and trucking representatives Tuesday at the Capitol where they encouraged lawmakers to pass legislation barring automated trucks from the state's roadways.

Truck drivers from across the country gathered at the Missouri Capitol early Tuesday morning for a "parked protest" to let lawmakers know they oppose the introduction of automated trucks on the state's highways and roads.

More than a dozen drove their personal vehicles and "bob-tail" rigs - tractors without trailers - to the lot on the north side of the Capitol to demonstrate their concerns over "semi-autonomous" systems that operate driverless vehicles.

"It's a problem all over," said Harry Menkhoff, of Medicine Lodge, Kansas. "If they have an accident, it doesn't register until 10 minutes later that they've had an accident."

Menkhoff was joined by a number of trucking company owner-operators who said they believe "mega-carriers," such as FedEx and UPS, wish to use the vehicles for their entire fleets.

Billy Bogar, a Golden City truck driver, said many companies are lining up to try automated trucking because a number of federal grants available will make it worth their while.

It was recently reported UPS has been using self-driving trucks on a route between Phoenix and Tucson, he said.

"UPS has been testing it behind the scenes," he said. "They are delivering freight now."

He said driverless trucks are also already operating in California and Florida. Texas is preparing a route between Dallas and Houston, Bogar added.

Independent truckers oppose the vehicles for a number of reasons.

However, the most important issue is safety, the drivers said.

They were in Jefferson City on Tuesday to encourage lawmakers to pass legislation barring the vehicles from the state's roads. They also said - for the safety of the other vehicles around them - they would like to see requirements that truck drivers be able to read and speak English fluently.

And they said two federal House resolutions would be disastrous to independent trucking. HR 3781 would raise the minimum amount of liability the truck drivers are required for their rigs. The drivers said they were worried because it would raise the requirement to $4.9 million and would include wording that states it is to be adjusted regularly for inflation.

Drivers also said they are concerned about HR 1511, which would require drivers to provide barriers on their trailers that would prevent "under-ride crashes" - those that involve cars traveling under the trailers.

Side-impact crashes are rare, and the skirts required by the legislation would be too expensive for operators to provide, they said.

State Rep. Mike Moon, R-Ash Grove, greeted the men and women as they arrived at the Capitol. Moon took the visitors inside the Capitol for a quick rally to air their concerns.

As he addressed them, Moon said getting Missouri lawmakers on board for trucking safety and improvement was an uphill battle. He tried in the past session to push through legislation that would - hopefully - ease requirements on truckers that came about from a federal electronic logging. That legislation didn't even receive a hearing.

"Our House leadership, who pulled all the strings, didn't see any need. We passed a resolution that didn't amount to a pile of trash," Moon said.

The resolution asked federal lawmakers to give agriculture - the state's largest industry - an exemption from the mandate. Resolutions from lawmakers in the state Legislature don't get read on Capitol Hill, he said.

"To my knowledge, they don't look at them. This legislation urged them to ease off and to give ag a permanent exemption," Moon said.

The people from federal agencies who are writing the rules and regulations aren't elected, he continued.

"Elected officials have delegated their authority to make law to someone else. These rules are actually laws. They carry a full force and effect - they've got fines associated and sometimes jail time," Moon said.

"They're the monster that we created. The feds are supposed to answer to us," he said. "But they have been given so much power and authority - they're like Frankenstein running across the countryside, and we can't do anything about it."