Church reflects on its history of slavery for Angela Project 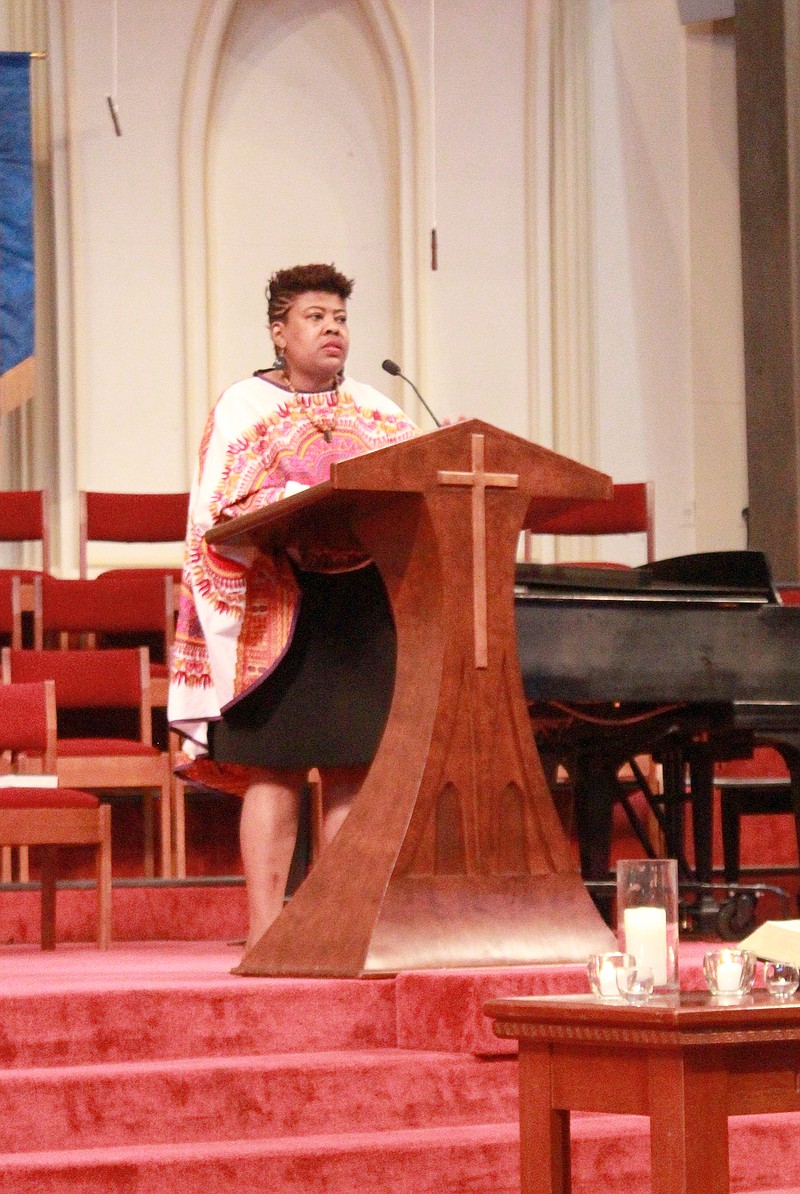 The Rev. Cassandra Gould spoke about "Reflections on a Pilgrimage," Monday during the Angela Project Community Worship at First Baptist Church. She explained the work of the church is to change the course of history.

A three-year effort by Baptist groups to commemorate and discuss the arrival of the first enslaved African to set foot in the New World comes to a conclusion Wednesday.

Angela stepped off a ship on Aug. 20, 1619, in the British colony (at Point Comfort) in Virginia.

On the eve of the anniversary, First Baptist Church of Jefferson City hosted an Angela Project Commemoration Service and faced the truth about the history of the church.

The service featured readings from whites in the gathering, who repented the enslavement of black people.

"We repent for kidnapping you from your native land of Africa, putting you in chains and under the brutality of the whip, forcing you to like down chained together in the dark, damp bottom of cargo ships for months," they read, "where millions of you died as we transported you to America to be exploited as free labor in the cotton fields that built white wealth."

"On behalf of the black people, we forgive you," blacks in the congregation replied. "We repent the hatred and unforgiveness that we have harbored toward you for the enslavement of black people and for injurious actions that you inflicted upon us through multiple generations."

The event began with a reflection on the history of slavery at the First Baptist Church, presented by Brian Kaylor.

"It's a way of being honest about our own history," he said.

The church in Jefferson City has existed since 1840, he said. Four of the first seven pastors of the church were slaveholders, he said.

Few records remain about the three black charter members, only their first names were taken down.

There was a woman named Jenny, a man named Adams (or Adam) and a man who was called General. Shortly after the church formed, five women - including two black women named Milly and Phillis - joined the church. And records show a black man, Louis, who was held in bondage by the man who donated the site where the church stood later joined a black regiment of the Union Army.

"If we're going to make America again," Gould said. "I think it starts with those who represent the church. The church that went to my beloved Africa and built a church right over a slave dungeon.

"The church that forcibly took people like Angela from Angola, and for other unknown, unnamed, uncounted - countless people who were brought to America after Aug. 20, 1619."

Listeners were in the same church that has a history of slave-owners, that "out of the arrogance of white supremacy and white privilege thought that they could invent inferiority and tell people that look like me that they were not human."

So, she asked, "What will be the work of the church moving forward?"

Gould asked listeners what the work of the church would be in 2020, when the United States is involved in possibly the most contentious election in post-modern times. Is the work of the church to make its members feel better by offering missions to places where people have less? She asked if the work is recorded in the church's reports about food pantries.

"What does it look like for the church to lead the way in the country?" she asked. "To actually change the narrative - to change the statistics of the number of black and brown bodies that perish in the streets every day?"

The work of the church is to make that which is unholy holy, Gould said, to write a new song - a song that actually speaks to equality. It is to no longer conduct business as usual.

"The work of the church is to actually change the course of history," she said. "So that - not just 400 years from now - that our grandchildren are not reading poems that were written more than a half century ago that still mean the same thing."