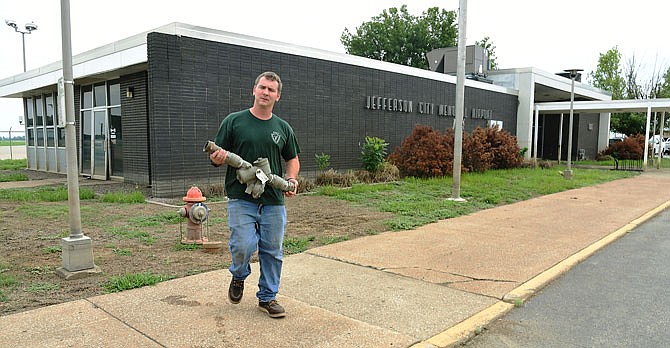 Matt Haller carries a backflow prevention device back to his vehicle Aug. 8, 2019, after picking it up at the airport terminal in North Jefferson City. Haller works for Central Missouri Plumbing which had loaned public works crews the device for when they were washing away the mud and debris after the floodwater receded. City staff is recommending the Jefferson City Memorial Airport terminal be demolished after seeing the damage that resulted from this most recent flood.

Jefferson City Public Works staff recommended the terminal building at the Jefferson City Memorial Airport be demolished after massive flooding damage exceeded 50 percent of the structure's value. The committee did not take any action and plans to continue the discussion at further city meetings.

Jefferson City Public Works Operation Director Britt Smith updated the Public Works and Planning Committee on Thursday about the next steps to repair the airport facilities.

The Federal Emergency Management Agency's substantial improvement rule states property owners of structures in a floodplain require the structure to be raised above the base flood elevation or protected from future flooding damages.

"The terminal building is just not conducive to elevating nor protecting at this time," Smith said. "We as staff are going to be recommending that we demolish that structure and hopefully replace it with something in the future."

Demolition could be seen as an opportunity to improve the terminal, Smith said. He has ideas of a potential two-story terminal with room for aircraft or storage on the first floor.

The city has not received an estimate of what insurance will cover. However, the city's policy with the national flood insurance program will allow the city to apply for $30,000 to demolish the terminal building.

Cole County and 65 other counties were approved for public assistance grants through FEMA. Those funds will help cover the cost to repair damaged roads, bridges, other public infrastructure and emergency response costs associated with the recent storms and flooding.

Other sources include an emergency grant through the State Aviation Trust Fund, which Smith said the city has already applied for, and the Missouri Department of Transportation's Non-Primary Entitlement Grant the airport receives annually.

City staff is currently repairing Taxiway C and runway 9/27, Smith said. Those improvements are expected to be completed Aug. 16, he added.

Currently, the airport is without an aircraft control tower, Smith said. Those damages total less than 50 percent of its value and will be restored within a month, he added.

Staff is also seeking temporary office space due to limited space and access to restrooms on-site.

Repairs to the Capital View Levee are expected to begin in late fall or early winter, Smith said.

The levee district will seek a U.S. Army Corps of Engineers grant to fund repairs.

"We have approximately five breaks in the levee," Smith said. "The biggest one being about 1,000 feet in length. The repair is more than likely going to require a realignment of the levee."

Floodwaters breached the Capital View Levee around May 24. The levee can hold about 30 feet.

A total of 6,000 regular hours, 1,370 overtime hours and 8,700 equipment hours have been completed by the street department in tornado and flood response and cleanup, Smith said.

That time set back general maintenance throughout the city, he added.

"We're certainly not where I want us to be in our potholes throughout town, but when you take that many hours out of our normal maintenance schedule, it does put us behind," Smith said. "We're going to work really hard to get caught back up."

In other business Thursday, the Jefferson City Transit Division submitted a reimbursement request for more than $47,896 from the Missouri Office of Administration for shuttle rides during the flood.

Because of high Missouri River levels in May and June, OA requested emergency shuttle rides to the Truman State Office Building for state employees from Capital Mall and the Missouri State Penitentiary.

State parking lots downtown were flooded when the river crested at 28.13 feet May 3. Levels continued to lower and rise through mid-June, reaching a height of 33.44 feet.

JeffTran provided a total of 522 hours and 8,548 rides from May 28 through June 28, according to Transit Director Mark Mehmert's memorandum to the committee. JeffTran operates at $90.79 per hour, Mehmert said.

The committee also approved the Transit Division to apply for a Federal Transit Administration Grant to replace some outdated bus equipment.

Projects would increase the overall efficiency of the system. The current system, a paper punchcard, is outdated and not user-friendly, Mehmert said.

An upgrade would allow riders to load a swipeable card for cashless transactions.

In other business, a recent inspection revealed the railroad crossing near the railroad spur west of Militia requires major repairs to the tracks. The project would include replacing the ties and rail at the cross, and some concrete road panels would have to be replaced.

Jefferson City and Cole County partnered to extend the railroad spur for Morris Packaging. The cost of that project is $335,343, Morasch said.