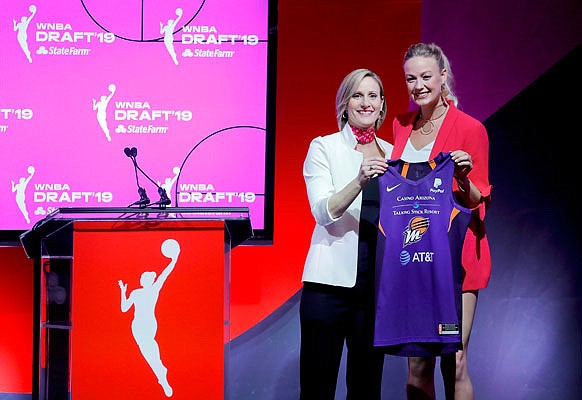 Sophie Cunningham poses with WNBA COO Christy Hedgpeth after being selected by the Phoenix Mercury in the second round of Wednesday night's WNBA draft in New York.

Two of the first 13 picks in Wednesday night's WNBA draft had a Mid-Missouri flavor.

Napheesa Collier was picked with the No. 6 overall selection by the Minnesota Lynx, while Sophie Cunningham went at No. 13 to the Phoenix Mercury in the draft held in New York.

Collier, who played her freshman season at Jefferson City High School before transferring to Incarnate Word Academy in St. Louis, recently wrapped up her collegiate career in the Final Four with the Connecticut Huskies (35-3).

Collier, a 6-foot-2 forward, was a three-time AP All-American with the Huskies and didn't miss a game in college.

As a senior, Collier led the Huskies in scoring at 20.6 points and rebounds with 10.8 as she totaled 25 double-doubles. She also blocked nearly two shots per contest and won the Katrina McClain Award, presented to the top power forward in women's college basketball.

"Napheesa is a little bit of everything as a player," Lynx coach Cheryl Reeve said in a video on the team's website. "She's just a player. We're excited."

Collier finished her UConn career ranked third in program history with 2,401 points, third in field-goal percentage at .613, fourth in rebounds with 1,219 and seventh in blocked shots with 251.

According to a release from the UConn women's basketball team, the Huskies have had 25 first-round picks since the WNBA was founded in 1997.

Cunningham became the highest-ever WNBA draft selection from the University of Missouri when she went to the Mercury on the first pick of the second round.

"It's a surreal feeling," Cunningham said in a video posted to the MU women's basketball Twitter account. "I'm so excited to get out there and start working."

Cunningham, a Rock Bridge graduate, closed her Missouri career with 2,187 points, tops in program history. She also finished fourth in scoring average at 17.0 points and in total assists with 390.

The 6-1 guard was a three-time AP All-American for the Tigers, selected as honorable mention after her sophomore and junior seasons and before earning third-team honors as a senior. Missouri made four NCAA Tournament appearances with Cunningham.

"I will bring a physical mentality, I will go out there and work hard and I know there's room for improvement," Cunningham said.

Among the players on the Mercury roster are former UConn guard Diana Taurasi and ex-Baylor center Brittney Griner.

Amanda Lassiter was the previous highest selection from Missouri, going 15th to the Houston Comets in 2001. Missouri's last WNBA draft selection was Bri Kulas in 2014, selected in the third round by the San Antonio Stars.