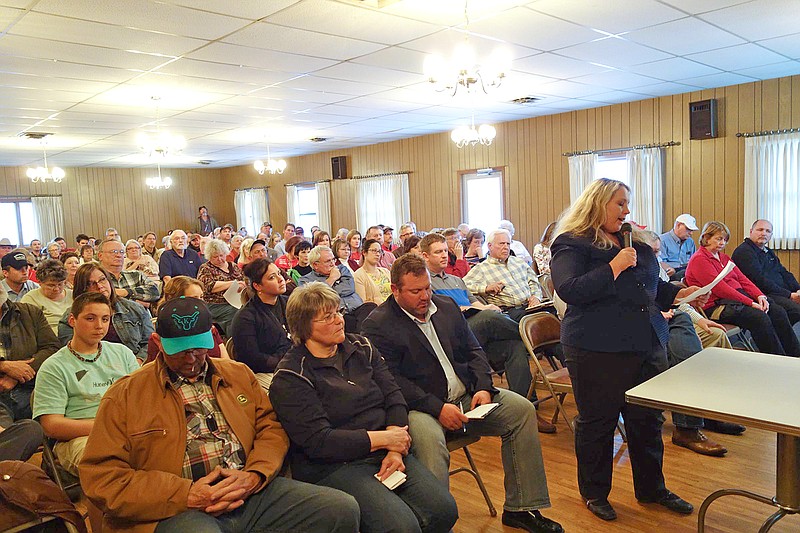 In this April 18, 2018 photo, Susan Hodges speaks against the proposed Tipton East CAFO for reasons such as potential water contamination and the potential to over-draw from the water table upon which area residents rely. She spoke during the public comment period of the Missouri Department of Natural Resources' meeting at Tipton Country Club.

As Missouri state senators prepare to debate a bill limiting county officials' power to regulate concentrated animal feeding operations (CAFO) within their county boundaries, Moniteau County's commissioners last week got an earful about why they should have that power.

State Sen. Mike Bernskoetter is sponsoring a bill that would prohibit county commissions and county health center boards from making regulations for CAFOs that are inconsistent with - or more stringent than - any state law, rules or regulations relating to environmental controls that the state's Natural Resources Department manages.

That would change current state law, which gives county governments a say in how CAFOs operate.

"I think we need to have a statewide policy for agriculture," Bernskoetter, R-Jefferson City, told the News Tribune last week.

Jeanne Heuser, a retired technical information scientist who worked with the U.S. Geological Survey, told Moniteau County commissioners Thursday CAFOs present a number of health problems that should concern local officials - including being a potential source for air and water pollution.

CAFOs proposed for Mid-Missouri - including a site near Hatton in Callaway County and near Tipton in Cooper County - would raise large numbers of pigs or hogs, then sell the animals to become meat products.

In Iowa, she told the commissioners, 95 percent of the CAFOs involve raising pigs - and 30 percent of the workers in those facilities have developed some degree of respiratory problems.

Additionally, Heuser said, children are reported to breathe in 20-50 percent of the "poop" air, creating a much higher risk for exposure leading to asthma.

Pigs naturally carry several kinds of influenza that humans also can be affected by, Heuser told the commissioners, and those diseases are "pretty common in CAFOs and other animal facilities like that."

But, he said: "There's still going to be a process. The Department of Natural Resources is not going to approve them without a process."

Member Jack Meizenbach, of Columbia, told the Senate's Agriculture, Food Production and Outdoor Resources Committee last month: "The track record of the Department of Natural Resources in regulating CAFOs is dismal, and DNR doesn't adopt rules for a specific place.

But varied regulations from one county to the next don't work either, Craig Overfelt, of the Missouri Bankers Association, told the committee.

"MBA supports Senate Bill 391 because it provides statewide standards for Missouri's agriculture industry," Overfelt told the News Tribune. "This bill provides certainty for our banks that work with farmers to finance their operations.

"Banks throughout Missouri are committed to meeting the financial needs of farmers in their communities."

And, Bernskoetter said, his bill would help improve Missouri's economy in other ways.

CAFOs can help get younger generations involved in agriculture as the family's business, he said.

"A lot of times, there's more than one employee, and then they buy feed locally and they shop locally," Bernskoetter explained. "And, especially, in some of these small counties, where there's not a lot of population, it helps the whole economy in those small counties."

Bernskoetter said it's important to remember "agriculture is our number one industry, and I think the Department of Natural Resources can do a good job of regulating these animal feeding operations."

Again, the Sierra Club's Meizenbach disagreed, telling the Senate Agriculture committee last month Bernskoetter's proposed law "prevents communities from making decisions to protect the public health of their residents and the environmental health of their communities."

In his testimony at the March 5 Senate committee hearing, Meizenbach noted Bernskoetter's proposal, if it becomes law, "will destroy agricultural related existing health ordinances in 20 counties that have been passed by local, elected officials. Not only will existing ordinances be removed from the books, but the ability to pass any ordinances in the future to protect the health and welfare of the communities' citizens is being taken away."

Senate Floor Leader Caleb Rowden, R-Columbia, told reporters he hasn't scheduled debate on Bernskoetter's bill yet, but understands the issues and the agriculture industry sees its passage as a priority.

"It's one of those things where we've had issues over the course of the last few years, where you see this tapestry of regulations across county lines or across municipal lines, and we've taken action," Rowden said. "I think we have to be careful about doing that.

"All of us want to respect local control as often as possible, but there are times, certainly, when industry goes across (political) lines and when those regulations can stifle their ability to do what they do. That's when we have to take a look at it."

"I have always erred on the side of caution (and) never supported CAFOs," she said. "The family farmer - although they're a small lobby group, they're a strong lobby group - and they have convinced me that this is dangerous for the future of the folks who live here.

"The fact of the matter is, if you have a huge plant like that, you're going to be affecting our water system."

But county commissions are on both sides of the issue.

Among the 30 organizations and individuals supporting Bernskoetter's bill at the March 5 hearing were representatives of the Callaway and Cooper county commissions, while two of the 27 opponents were from the Adair County Commission and the Jefferson County Health Department.

Bernskoetter expects the full Senate to debate his bill within the next couple of weeks.

If passed, it still would have to win the House of Representatives' approval before it would go to Gov. Mike Parson.