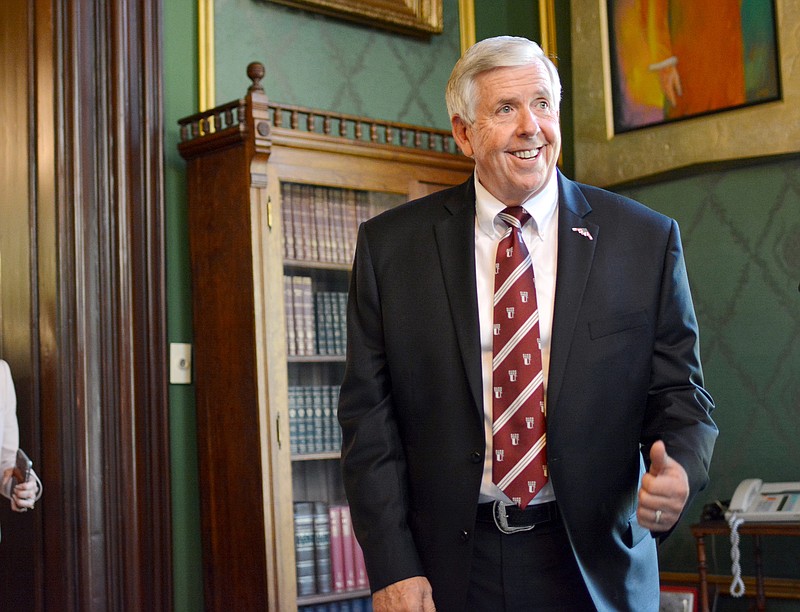 Missouri Gov. Mike Parson gives a thumbs up after a press conference Wednesday July 11, 2018 at the Governor's Mansion in Jefferson City.

The next steps after Gov. Mike Parson signed a bill Tuesday to expand science, technology, engineering and math opportunities will be to clarify whether the Missouri K-12 education department has spending authority over one of the established programs, and train teachers in computer science academics.

Parson signed House Bill 3 into law Tuesday at ceremonies in St. Louis and Poplar Bluff, after he called a special legislative session this fall in part to get the bill passed - after he had vetoed an earlier Senate version that had been passed with broad support.

"If we want to see long-term economic prosperity for our state, it's critical that we develop a well-trained workforce that is ready and willing to fill jobs in the fastest growing fields of science, technology, engineering and mathematics," Fitzwater said in a news release from the governor's office.

A "STEM Career Awareness Program" for middle school students - Missouri's Department of Elementary and Secondary Education has until Jan. 1, 2019, to solicit proposals for the online program's provider, and must select a provider by March 1. A state treasury fund set up for the program will collect appropriations from state government, as well as public and private donations.

DESE has until July 1, 2019, to develop a high school graduation policy that will allow students to substitute one unit of science, math or practical arts academic credit for a computer science course. Practical arts refers to courses such as agriculture or business.

The most recent fiscal note on House Bill 3 shows the Oversight Division of the Committee on Legislative Research was not sure whether DESE had the authority to pay for the online STEM Career Awareness Program.

Fitzwater and Nancy Bowles, DESE's communications coordinator, said DESE has sent a letter to the governor's office, asking for clarification on the issue. Bowles confirmed the letter was sent recently, if not Tuesday.

Bowles said DESE is working with the Office of Administration on a proposal solicitation document, adding "They are reportedly close to having the (document) ready to submit in time to meet the Jan. 1 deadline" for the online program.

Fitzwater said that beyond securing mechanisms for funding, once DESE has computer science academic standards in place, it will be important to get teachers trained.

There are not any specific goals or timelines in the bill about progress markers, such as how many school districts might be desired to have a certain percent of students to have taken computer science by graduation by a certain date, but Fitzwater said, "As soon as possible, we'd (like to) have the broadest access possible."

Bowles said the change in high school graduation policy to allow for students to take a computer science credit would be a simple process - "DESE will simply update the graduation handbook."