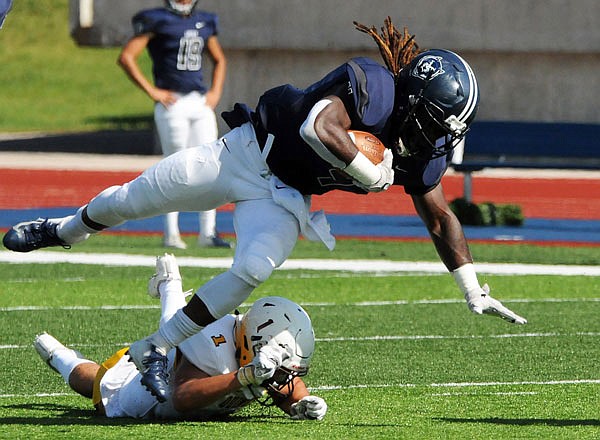 The Lincoln Blue Tigers are knocking down some dubious streaks this season.

The first was winning their conference opener against Southwest Baptist, something they had not done since 2000. Then came last week's 23-14 win at William Jewell, the Blue Tigers' first conference road win since 1975.

Lincoln will try to improve to 3-3 in the Great Lakes Valley Conference today at Missouri S&T, the Blue Tigers' third game of a four-game road trip. Kickoff is at 7 p.m. in Rolla.

So much for being picked to finish last in the GLVC, huh?

"To be honest, I guess there wasn't a monkey on my back, because I didn't know nothing about it," Lincoln coach Steven Smith said of the Blue Tigers' breakthrough to win on the road in conference play.

"I was just trying to get the win. I don't look at those things, honestly. The biggest thing we're trying to do is have a winning record, show the change, show everything that we're doing, how we're moving forward."

Lincoln (3-5) rushed for 230 yards against William Jewell, a drastic contrast from the 12 yards rushing the week before against Truman State. It was the most rushing yards in a single game by the Blue Tigers since they gained 265 yards on the ground in last season's 49-19 win against Lincoln (Pa.).

"We just executed. They just played the way they were capable of playing," Smith said. "All week, we wanted to play smash-mouth football, and we did."

Lincoln trailed 7-0 against the Cardinals, then scored on four consecutive possessions to pull away to victory.

"They made some great plays, we just happened to make a few more plays than they did," Smith said.

Although the Hawks outgained the Miners 316-294, Missouri S&T's defense came up big on third down. Quincy converted on just 6-of-19 attempts and punted seven times.

Smith said three turnovers - two interceptions and one fumble - were costly for Quincy.

"You can't turn the ball over, and this team preys off turnovers," Smith said.

Missouri S&T's offense is led by senior quarterback Tyler Swart, who has thrown for 1,832 yards and 16 touchdowns this season for the Miners.

While turnovers have been key for the Miners' defense, they have also plagued their offense. Swart threw three picks against Quincy, and Missouri S&T is minus-1 in turnover margin this season.

"We've got to put pressure on them, make them throw that ball away and give it away, make plays on the ball where we can get those turnovers and not give them any turnovers," Smith said.

Missouri S&T's backfield is anchored by junior running back Deshawn Jones. After a couple of struggling performances, the All-GLVC first team running back had 22 carries for 137 yards against the Hawks.

Jones was a nominee last season for the Harlan Hill Trophy, the award given to the NCAA Division II Player of the Year.

Swart has five receivers with at least 200 yards receiving. Leading the way is senior Braxton Graham, who was on the All-GLVC second team last year and is second in the conference with 627 yards receiving to go with eight touchdowns.

Smith was quick to point out his defense has to practice every day against Blake Tibbs, who leads the GLVC with 640 yards receiving.

"They're very competitive, so I think they're getting the look they need to contain (Graham)," he said. "Our (defensive backs) will be fine. I think they'll play well. They've been doing a good job not giving up the explosion plays, and I think it's because of the practice, because we have a good receiver corps on this side of the ball."

Missouri S&T is averaging 28.8 points per game, while the defense is giving up an average of 21.3 points.

"They're going to depend on their front seven," he said.

Junior defensive back Ryan Kirkendoll is the reigning GLVC Defensive Player of the Week for the Miners. He recorded two interceptions and nine tackles against Quincy.

Leading the Miners' secondary is senior defensive back Roderick Chapman, a returning All-GLVC first-team player with four interceptions. Already a three-time GLVC Player of the Week this season - twice on special teams, once on defense - Chapman recorded three interceptions in a game earlier this year against Southwest Baptist.

Smith said time of possession will be a crucial factor in this game, an area in which the Blue Tigers have the advantage.

Lincoln possessed the ball for 39:32 against William Jewell. For the season, the Blue Tigers are possessing the ball 32:59 per game, which ranks 17th in Division II.

Missouri S&T controlled the ball for just 22:38 against Quincy.

"They can't score if their offense isn't on the field."

Missouri S&T leads the overall series 22-11 against Lincoln, winning last year's contest 37-3 at Dwight T. Reed Stadium. The Miners have won 13 of the last 15 games in the series, holding the Blue Tigers to 23 points or less in each of those games. Missouri S&T received three points in this week's AFCA Division II Top 25 poll. Indianapolis is ranked No. 16, while Lincoln's next opponent, Tarleton State, is ranked eighth. Smith said running back Hosea Franklin continues to rehab from knee surgery and has been jogging this week. However, Franklin is expected to miss his fifth straight game. "Everybody who played last week is coming back (to play today)," Smith said.